Pasco (/ˈpæskoʊ/ US dict: păs′·kō) is a city in and the county seat of Franklin County, Washington, United States.[8]

Pasco is one of three cities that make up the Tri-Cities region of the state of Washington. The Tri-Cities is a mid-sized metropolitan area of approximately 271,124 people that also includes the cities of Kennewick and Richland in 2013 estimate.

On October 16, 1805, the Lewis and Clark Expedition camped in the Pasco area, at a site now commemorated by Sacagawea State Park. The area was frequented by fur trappers and gold traders. In the 1880s, the Northern Pacific Railway was built near the Columbia River, bringing many settlers to the area. Pasco was officially incorporated on September 3, 1891. It was named by Virgil Bogue, a construction engineer for the Northern Pacific Railway after Cerro de Pasco, a city in the Peruvian Andes, where he had helped build a railroad. In its early years, it was a small railroad town, but the completion of the Grand Coulee Dam in 1941 brought irrigation and agriculture to the area. 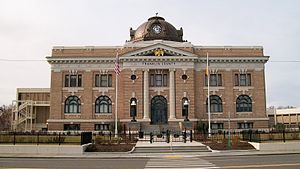 The Franklin County courthouse in Pasco.

Due in large part to the presence of the Hanford Site, the entire Tri-Cities area grew rapidly from the 1940s through 1950s. However, most of the population influx resided in Richland and Kennewick, as Pasco remained primarily driven by the agricultural industry, and to a lesser degree the NP Pasco rail yards. After the end of World War II, the entire region went through several "boom" and "bust" periods, cycling approximately every 10 years and heavily based on available government funding for Hanford-related work. Farming continues to be the economic driver for most of the city's industrial tax base.

In the late 1990s, foreseeing another Hanford-related boom period, several developers purchased large farm circles in Pasco for residential and commercial development. Since that time, Pasco has undergone a transformation that has not only seen its population overtake the neighboring city of Richland, but also has resulted in growth in the city's retail and tourism industries. Recently incorporated land on the West side of the city has exploded into new housing tracts, apartments, and shopping centers. This area of the city has become referred to locally as "West Pasco", distinguishing it from the older area of town to the East. In addition to an influx of new residents to the region, many residents of the Tri-Cities have moved from Richland and Kennewick to West Pasco due to its central location and virtually all-new housing and business.

As Pasco is located in Southeastern Washington, the city lies in the rain shadow of the Cascade Range. As a result, the area is a windswept desert, receiving little precipitation throughout the year. Hot summers, warm springs, and cold winters provide a stark contrast to other areas of the state.

The massive Columbia River borders the south side of the city, separating it from the neighboring cities of Richland and Kennewick.

There were 17,983 households of which 51.3% had children under the age of 18 living with them, 55.1% were married couples living together, 14.9% had a female householder with no husband present, 7.1% had a male householder with no wife present, and 22.9% were non-families. 17.0% of all households were made up of individuals and 5.3% had someone living alone who was 65 years of age or older. The average household size was 3.30 and the average family size was 3.73.

There were 9,619 households out of which 45.6% had children under the age of 18 living with them, 54.7% were married couples living together, 14.3% had a female householder with no husband present, and 24.5% were non-families. 20.1% of all households were made up of individuals and 8.5% had someone living alone who was 65 years of age or older. The average household size was 3.30 and the average family size was 3.79.

Pasco has the Council-Manager form of government with an elected body of 7 council members, 5 of whom are from specific districts within the city, and 2 elected at-large. The council biennially elects from its own members a mayor that runs meetings, signs certain documents, and acts in ceremonial capacity; and a mayor pro-tem that acts in the mayor's absence. The city manager is chosen by council as a professional administrator and runs day-to-day operations of the city including management of staff. Council members are part-time legislators. Those elected after 2005 receive $900 per month and mayors receive $1,100 a month.[citation needed]

The city also has a number of advisory boards appointed by the council and includes citizen volunteers that give their time and expertise in dealing with issues including parks, senior citizen issues, planning, code enforcement, etc.[citation needed]

Due to the agricultural region in which it sits, several large food processing companies have a presence in the city of Pasco. ConAgra Foods, Reser's Fine Foods, and Twin City Foods are just some of the companies that have chosen to base a part of their operations here. In recent years, the region has become a large player in Washington State's booming wine industry. Gordon Brothers Cellars, Fidelitas Winery, Kamiak Vineyards, and Preston Premium Wines are a few of the local wineries. 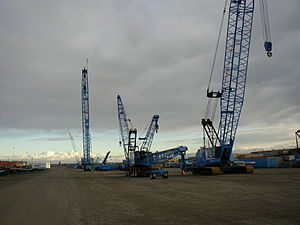 The local Amtrak station has been located in Pasco since 1971, when the national rail passenger service was established. Before this, the Northern Pacific operated passenger trains through Pasco.

Additional commercial transportation is also done through extensive barge traffic on the Columbia and Snake rivers. Rail transport is provided by the BNSF Railway. Trucking uses Interstate 182, and to a lesser extent U.S. Route 395.

Privately, Pasco and the greater Tri-Cities area is served by Tri-Cities Prep, a Catholic high school off of Road 100, and St. Patrick's grade school next door to the campus of Pasco High School.

With a rapidly growing campus, Columbia Basin College is the largest public two-year community college in Southeastern Washington with a student body of nearly 7,000 students. The college was founded in 1955 and serves students from the entire Tri-Cities region.

There are three middle schools in Pasco, serving students ranging from grade six to eight. The easternmost school is Ellen Ochoa Middle School, the westernmost is John McLoughlin Middle School, and the Isaac Stevens Middle School is in the middle. 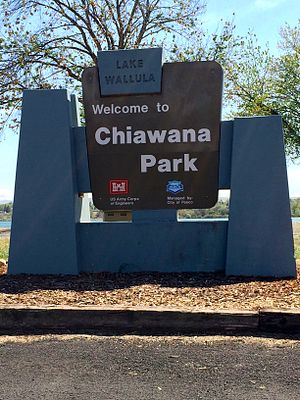 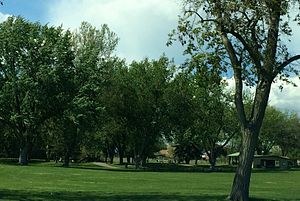 Among all of Pasco's annual activities and events, the most popular is the Pasco Farmers Market, located in downtown Pasco. The market is open from May through October each year, drawing a large regional crowd and providing an outlet for farmers selling fresh produce.

The Fiery Foods Festival is another popular event held each September. This one-day event celebrates spicy foods of all varieties, and highlights the thriving Hispanic culture that lives in the city.

Pasco's Gesa Stadium hosts the Tri-City Dust Devils baseball club of the Northwest League. The Dust Devils are a Class A team of the Colorado Rockies. The team plays during summer months during its short season.

Pasco is located along a major stretch of the 22-mile Sacagawea Heritage Trail, an interactive educational and recreational hiking/biking loop that circles the Tri-Cities area.

Pasco has several waterfront parks along the Columbia River, as well as easy river access for boaters, fishers, and skiers at any of the free boat launches.

The TRAC (Trade Recreation Agricultural Center) is a large complex located in West Pasco which hosts regional events, including (but not limited to) conventions, meetings, sporting events, and concerts. The TRAC is located near the booming Road 68 corridor of West Pasco.