Passiontide (in the Christian liturgical year) is a name for the last two weeks of Lent, beginning on the Fifth Sunday of Lent, long celebrated as Passion Sunday, and ending on Holy Saturday. 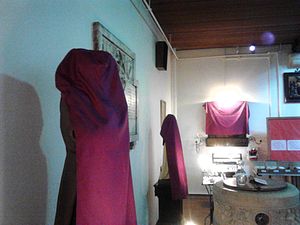 Statues and icons veiled in violet shrouds for Passiontide in St Pancras Church, Ipswich (in Catholic churches in England paintings are also veiled)

In the Roman Catholic Church, and in Anglo-Catholic churches, all crucifixes and images may be covered in veils (usually violet, the color of vestments in Lent) starting on Passion Sunday: "The practice of covering crosses and images in the church may be observed, if the episcopal conference decides. The crosses are to be covered until the end of the celebration of the Lord's passion on Good Friday. Statues and images are to remain covered until the beginning of the Easter Vigil."[1] (Specifically, those veils are removed during the singing of the Gloria.) The veiling was associated with Passion Sunday's Gospel (John 8:46-59), in which Jesus "hid himself" from the people.[2]

In the Tridentine Mass, Psalm 42 (43) is omitted at ferial Masses until Holy Thursday inclusive, as is the short doxology (Gloria Patri) at the Introit and the Psalm Lavabo at Mass. It is likewise omitted in Psalm 94 at Matins, and the responds at Matins, Prime, Terce, Sext, None, and Compline. Also in the ferial Mass, the Preface for Lent gives way to the Preface of the Cross.

Passiontide is observed in many provinces of the Anglican Communion, for example in the Church of England. In the Common Worship liturgy, material proper to Passiontide is used from Evening Prayer on the Eve of the Fifth Sunday of Lent to the evening of Easter Eve. Such "proper material" includes prefaces to the Eucharistic Prayer, special orders for Morning Prayer and Evening Prayer, and seasonal material for Night Prayer and Prayer During the Day. Although the Sarum Use used crimson as the liturgical colour for the whole of Passiontide, Common Worship recommends continuing in purple (or Lenten array) throughout the fifth week of Lent, changing to red for Holy Week.

Much music has been written for Passiontide or rather for the last days of Holy Week. Passion cantatas have been composed to texts in a variety of languages, taking as their theme the hours or days before the Crucifixion of Christ. Many settings have been made of the Latin poem Stabat Mater, which describes Mary standing in front of the Cross watching her son die (the Feast of the Seven Dolours of the Blessed Virgin is observed on Friday in Passion Week), and the lessons from the Tenebrae service have been set by a variety of composers.

Notice that there are special hymns for Palm Sunday, thus hymns for Passiontide may be squeezed out on that day (which is the last Sunday of Lent).