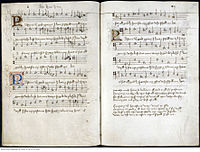 "Pastime with Good Company", also known as "The King's Ballad" ("The Kynges Balade"), is an English folk song written by King Henry VIII in the beginning of the 16th century, shortly after his coronation. It is regarded as the most famous of his compositions,[1] and it became a popular song in England and other European countries during the Renaissance. It is thought to be written for Catherine of Aragon.

The early years of Henry VIII's reign marked a distinctive character of exuberance and extravagances in the English court, made possible by the political stability of the kingdom and wealth of the state's finances. Royal banquets and feasts were held on a continual basis, as were outdoor sports and pastimes, such as hunting, hawking, and jousting and archery tournaments. The young King himself was a skilled sportsman, excelling in horse riding, archery, wrestling and real tennis. The song was penned during this period, and presents a general praise to all these entertainments and diversions, depicting the general state of mind of leisure and unconcern that prevailed in the royal court at the time. At the same time, the text provides a moral justification for all this merriment: company is preferable to idleness; for the latter breeds vice. 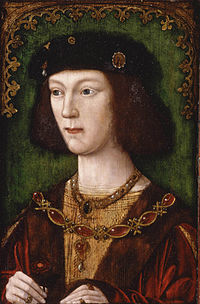 Eighteen-year-old King Henry VIII after his crowning in 1509, around the date he composed Pastime with Good Company.

As with every man of noble birth in Renaissance times, Henry VIII was expected to master many skills, including fencing, hunting, dancing, writing poetry, singing, and playing and composing music, and was educated accordingly as a prince. Henry was considered a talented composer and poet by his contemporaries.[2]

The song is supposed to have been played in court, along with all the other of the King's compositions.[3] However, due to its simple and catchy melody, it became a popular tune and was soon afterwards interpreted frequently at English fairs, taverns and events. It is also believed to have been one of the favourite musical pieces of Queen Elizabeth I.[4] The song is referred to in a number of contemporary documents and publications, attesting to its popularity, and was subject of a wide number of variants and instrumental rearrangements by different musicians in the following years. In the 1548 work The Complaynt of Scotland, the anonymous author mentions "Passetyme with gude companye," as being among the popular songs within the kingdom of Scotland in the early part of the 16th century.[5]

The oldest known version is part of the Henry VIII Manuscript (c. 1513), a collection of 14 works of his authorship currently preserved at the British Library (BM Addl. MSS. 31,922; Addl. MSS. 5,665; MSS. Reg. Appendix 58),[6] which are signed: "By the King's Hand". The manuscript also includes two masses, a motet, an anthem, and other songs and ballads, both vocal and instrumental.

"Pastime with Good Company" remains a favourite piece in choral repertoires, and has been recorded in many variants that include lute, recorder, trombone, percussion and flute, among other instruments. Because of its distinctive early Renaissance melody, it has also been included in different movies and documentaries based on the figure of Henry VIII and the Tudor era.[7][8]

The song was also subject of numerous contemporary versions in recent times. Renamed as "Past Time with Good Company", it was included as the third track on Under a Violet Moon, the second album by Renaissance-inspired folk rock group Blackmore's Night. The song was also played by rock band Jethro Tull, and appears on the remastered CD Stormwatch and The Best of Acoustic Jethro Tull bearing the name "King Henry's Madrigal". Additionally, the song was arranged and played by English progressive/folk rock band Gryphon, appearing on their 1973, self-titled album.[9] The first verse of the song was also used as the opening to the song "Legacy of Tudors" by symphonic metal band Serenity on their 2013 album War of Ages.

Based on British Library MS 31922, with additional bars, slurs, and time signature. (Click notes to download or listen to MIDI file.)

The '9'-like symbol in the first line in the original is a scribal abbreviation for the com of "company"; another is 'cō', as used in the ninth line.