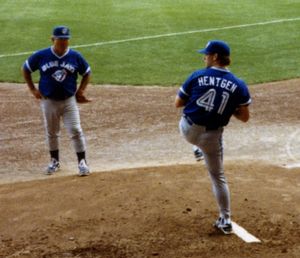 Hentgen warms up in the bullpen in 1993; pitching coach Galen Cisco looks on

Hentgen was born in Detroit, and was offered a baseball scholarship to Western Michigan University, but signed with the Toronto Blue Jays instead after being drafted in the 5th round of the 1986 Major League Baseball draft.[1] He made his debut in 1991, and played a large part in the Blue Jays' World Series championship in 1993, winning 19 games in the regular season.[1] His best year, however, came in 1996 when he went 20–10 with a 3.22 ERA and 177 strikeouts to win the American League Cy Young Award.[1] Hentgen was an American League All-Star in 1993, 1994, and 1997.

On November 18, 2003, Hentgen returned to the Blue Jays on a one-year free agent deal worth $2.2 million. However, he was unable to regain the consistency that had made him successful in the mid-90s, and on July 24, 2004, Hentgen announced his retirement from baseball.[3]

Hentgen was noted for his success in challenging hitters directly, mostly throwing his fastball for strikes to get ahead early in the count. This would set up his curveball or high fastball to strike out the batter.[citation needed]

Hentgen rejoined the Toronto Blue Jays under new manager John Farrell as their new bullpen coach for the 2011 season.[4] It was Hentgen's first coaching assignment. He stepped down in November 2011 due to family reasons, and was given the title of Special Assistant to the Organization.[5] On December 10, 2012, Hentgen was again appointed as the Blue Jays bullpen coach.[6]

On January 4, 2014, the Blue Jays announced that Bob Stanley would be replacing Hentgen as their bullpen coach. Hentgen continued to work with the Blue Jays, as a special assistant to the organization.[7][8]