From Infogalactic: the planetary knowledge core
Jump to: navigation, search
For other people of this name, see Patrick Reid.

Patrick Robert "Pat" Reid, MBE, MC (13 November 1910 – 22 May 1990) was a British Army officer and historical author of non-fiction. As a British prisoner of war during the Second World War, he was held captive at Colditz Castle when it was designated Oflag IV-C. Reid was one of the few to escape from Colditz, crossing the border into neutral Switzerland in late 1942. After the war Reid was a diplomat and administrator before eventually returning to his pre-war career in civil engineering. He also wrote about his experiences in two best-selling books, which became the basis of a film, TV series and even a board game.

Patrick Reid was born in Ranchi, India,[1] the son of John Reid, CIE ICS,[2] of Carlow, Ireland,[3] and Alice Mabel Daniell.[2] He was educated at Ladycross prep School, Seaford, Sussex, Clongowes Wood College, County Kildare, and Wimbledon College, London, and graduated from King's College London in 1932. He then trained as a civil engineer, working for Sir Alexander Gibb & Partners from 1934 to 1937, and becoming an Associate Member of the Institution of Civil Engineers in 1936.[2]

Reid joined the Territorial Army and was commissioned as a Second Lieutenant on 16 June 1933 on the General List. He joined the Royal Army Service Corps (Supplementary Reserve) with the same rank on 5 June 1935. He was promoted to Lieutenant exactly three years later on 5 June 1938.[2]

Reid was mobilized for active duty on 24 August 1939, and served in the 2nd Infantry Division, receiving promotion to Temporary Captain on 1 December 1939. On 27 May 1940, while serving as a member of the British Expeditionary Force during the Battle of France,[2] he was captured by the Germans near Cassel.[4] He was sent to Laufen castle, Bavaria, designated Oflag VII-C, arriving there on 5 June 1940.[2]

Within days of his arrival, Reid was planning an escape, determined to return home by Christmas. After seven weeks digging Reid and a group of prisoners completed a tunnel, 24 feet (7.3 m) long, from the prison basement to a small shed adjoining a nearby house. At 06:30 on 5 September 1940, Reid and five others broke out and made for Yugoslavia, only 150 miles away. However, after five days the escapees were recaptured in Radstadt, Austria. Reid was sentenced to a month of solitary confinement, on a diet of bread and water.[5]

As one of the "Laufen Six", Reid was then sent to Colditz Castle, designated Oflag IV-C, a special "escape-proof" camp, arriving there on 10 November 1940. It was not long before Reid attempted an escape. He bribed a seemingly willing German guard to look the other way. On the night of 29 May 1941 twelve prisoners crawled through a sewer pipe from the canteen to an outer courtyard, planning to then descend a forty-foot wall, and then over another wall 12 feet high topped with barbed wire. However, although the guard had accepted the bribe, he also reported the escape plan to his superiors, and the Germans were waiting for them. After another spell in solitary, Reid accepted the position of Escape Officer, responsible for overseeing all British escape plans. Reid assisted in many escape attempts, some successful,[5] until April 1942, when he was replaced as Escape Officer by fellow member of the "Laufen Six" Captain Richard "Dick" Howe.[6] 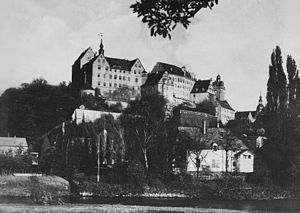 Reid finally took his own chance to escape on the night of 14/15 October 1942, along with Major Ronald Littledale, Lieutenant Commander William L. Stephens RNVR, and Flight Lieutenant Howard Wardle RAF. They cut through the bars on a window in the prisoner's kitchen, and climbed out onto the flat roof of the German kitchen. They then crossed the brightly lit outer yard, and avoided being seen by a guard. They entered a storage cellar under the Kommandantur (Commandant's HQ), crawled out through a narrow air shaft leading to the dry moat, and exited through the park. They split into pairs,[4] with Reid and Wardle disguised as Flemish workmen[7] travelling by train to Tuttlingen, near the Swiss border, via Zwickau and Munich. They crossed the border near Ramsen on the evening of 18 October. Stephens and Littledale also travelled to Tuttlingen by train, via Chemnitz, Nuremberg and Stuttgart, then followed Reid and Wardle across the border in the early hours of 20 October.[4]

Reid remained in Switzerland until after the end of the war, serving as an Assistant Military Attaché in Berne from 9 March 1943 until early 1946, and receiving promotion to Temporary Major on 1 November 1945.[2] He was unusually discreet about his duties there, and was in fact working for the Secret Intelligence Service (MI6) gathering intelligence from arriving escapees.[8]

Reid left the army on 29 March 1947, but remained a member of the Regular Army Reserve until reaching mandatory retirement age on 15 November 1965. On that day he was awarded the honorary rank of Major.[2]

Reid served in the British embassy at Ankara, Turkey, as First Secretary (Commercial) from 1946 until 1949, then as Chief Administrator for the Organisation for European Economic Cooperation in Paris, France, until 1952.[2]

He was adopted as a Prospective Parliamentary Candidate by the Conservative Party in 1953, but failed to win a seat in the 1955 election.[2]

Reid then returned to his pre-war career in civil engineering, serving as a director of the construction companies Richard Costain (Projects) Ltd. and Richard Costain (Middle East) Ltd. between 1959 and 1962, and working for the consulting engineers W.S. Atkins & Partners in 1962–63.[2]

Reid was married three times; firstly in 1943 to Jane Cabot. They had three sons and two daughters, and were divorced in 1966. His second marriage in 1977 to Mary Stewart Cunliffe-Lister ended in 1978, with her death. In 1982 he married his third wife, Nicandra Hood, but they separated after a few years.[citation needed] He died at Frenchay Hospital, Bristol,[7] on 22 May 1990, at the age of 79.[2]

Reid served as president of the Blackboys Cricket Club in Framfield, Sussex in 1972.[9]

For his "gallant and distinguished services in the field" during the Battle of France Reid was awarded the Military Cross on 4 May 1943,[10] and was made a Member of the Order of the British Empire (Military Division) on 20 December 1945.[11]