Patience (or forbearing) is the state of endurance under difficult circumstances, which can mean persevering in the face of delay or provocation without acting on negative annoyance/anger; or exhibiting forbearance when under strain, especially when faced with longer-term difficulties. Patience is the level of endurance one can have before negativity. It is also used to refer to the character trait of being steadfast. Antonyms include hastiness and impetuousness.

In a 2005 study involving common marmosets and cottontop tamarins, animals of both species faced a self-control paradigm in which individuals chose between taking an immediate small reward and waiting a variable amount of time for a large reward. Under these conditions, marmosets waited significantly longer for food than tamarins. This difference cannot be explained by life history, social behaviour or brain size. It can, however, be explained by feeding ecology: marmosets rely on gum, a food product acquired by waiting for exudate to flow from trees, whereas tamarins feed on insects, a food product requiring impulsive action. Foraging ecology, therefore, may provide a selective pressure for the evolution of self-control.[1] 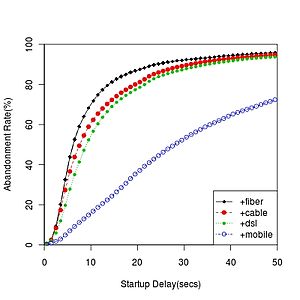 Patience of human users in the online world has been the subject of much recent scientific research. In a 2012 study[2] involving tens of millions of users who watched videos on the Internet, Krishnan and Sitaraman show that online users lose patience in as little as two seconds while waiting for their chosen video to start playing.[3] The study also shows that users who are connected to the Internet at faster speeds are less patient than their counterparts connected at slower speeds, demonstrating a link between the human expectation of speed and human patience. These and other scientific studies of patience have led many social commentators to conclude that the rapid pace of technology is rewiring humans to be less and less patient.[4][5][6]

Patience and fortitude are prominent themes in Judaism. The Talmud extols patience as an important personal trait. The story of Micah, for example, is that he suffers many challenging conditions and yet endures, saying "I will wait for the God who saves me." Patience in God, it is said, will aid believers in finding the strength to be delivered from the evils that are inherent in the physical life.[7]

In the Hebrew Torah, patience is referred to in several proverbs, such as "The patient man shows much good sense, but the quick-tempered man displays folly at its height" (Proverbs 14:29, NAB); "An ill-tempered man stirs up strife, but a patient man allays discord." (Proverbs 15:18, NAB); and "A patient man is better than a warrior, and he who rules his temper, than he who takes a city." (Proverbs 16:32). The emotion is also discussed in other sections, such as Ecclesiastes: "Better is the patient spirit than the lofty spirit. Do not in spirit become quickly discontented, for discontent lodges in the bosom of a fool." (Ecclesiastes 7:8-9, NAB).

In the Christian Bible, patience is referred to in several sections. The Book of Proverbs notes that "through patience a ruler can be persuaded, and a gentle tongue can break a bone" (Proverbs 25:14-16, NIV); Ecclesiastes points out that the "end of a matter is better than its beginning, and patience is better than pride" (Ecclesiastes 7:7-9, NIV); and 1 Thessalonians states that we should "be patient with all. See that no one returns evil for evil; rather, always seek what is good for each other and for all" (1 Thessalonians 5:14-15, NAB). In the Epistle of James, the Bible urges Christians to be patient, and " see how the farmer waits for the precious fruit of the earth,...until it receives the early and the late rains." (James 5:7-11, NAB). In Galatians, patience is listed as part of the "fruit of the Spirit": "love, joy, peace, patience, kindness, goodness, faithfulness, gentleness and self-control. Against such things there is no law". (Galatians 5:21-23, NIV). In Timothy, the Bible states that "Jesus might display his unlimited patience as an example for those who would believe on him and receive eternal life".(1 Timothy 1:15-17, NIV).[9]

Patience with steadfast belief in Allah is called sabr (Arabic: صْبِرْ ṣabr‎‎), one of the best virtues of life in Islam. Through sabr, a Muslim believes that an individual can grow closer to God and thus attain true peace. It is also stressed in Islam, that Allah is with those who are patient, more specifically during calamity and suffering. Several verses in Quran urge Muslims to seek Allah's help when faced with fear and loss, with patient prayers and perseverance for Allah. For example:[10]

Be sure we shall test you with something of fear and hunger, some loss in goods or lives or the fruits (of your toil), but give glad tidings to those who patiently persevere; who say, when afflicted with calamity: "To Allah We belong, and to Him is our return".

Narrated Aisha: I asked Allah’s rasool about the plague. He said, “That was a means of torture which Allah used to send upon whomsoever He wished, but He made it a source of mercy for the believers, for anyone who is residing in a town in which this disease is present, and remains there and does not leave that town, but has patience and hopes for Allah’s reward, and knows that nothing will befall him except what Allah has written for him, then he will get such reward as that of a martyr.”

In Islamic tradition,(Ayyoob) illustrates a story where he demonstrated patience and steadfast belief in Allah. Ibn Kathir narrates the story in the following manner: Job was a very rich person with much land, and many animals and children — all of which were lost and soon he was struck with disease as a test from Allah. He remained steadfast and patient in his prayers to Allah, so Allah eventually relieved him of the disease, gave him double the money he lost, and raised to life twice the number of children who had died before him.[11]

In Buddhism, patience (Skt.: kshanti; Pali: khanti) is one of the "perfections" (paramitas) that a bodhisattva trains in and practices to realize perfect enlightenment (bodhi). The Buddhist concept of patience is distinct from the English definition of the word. In Buddhism, patience refers to not returning harm, rather than merely enduring a difficult situation. It is the ability to control one's emotions even when being criticized or attacked.[12] In verse 184 of the Dhammapada it is said that 'enduring patience is the highest austerity'.[13]

Patience, in Hindu philosophy, is the cheerful endurance of trying conditions and the consequence of one's action and deeds (karma).[23] It is also the capacity to wait, endure opposites - such as pain and pleasure, cold and heat, sorrows and joys - calmly, without anxiety, and without a desire to seek revenge.[24][25] In interpersonal relationships, virtuous titiksha means that if someone attacks or insults without cause, one must endure it without feeling enmity, anger, resentment or anxiety.[26] The concept of patience is explained as being more than trust, and as a value that reflects the state of one's body and mind.[27] The term pariksaha is sometimes also translated as test or exam, in other contexts. Some of these concepts have been carried into the spiritual understanding of yoga. Sandilya Upanishad of Hinduism identifies ten sources of patience and forbearances: Ahimsa, Satya, Asteya, Brahmacharya, Daya, Arjava,Kshama, Dhriti, Mitahara and Saucha. In each of these ten forbearances, the virtuous implicit belief is that our current spirit and the future for everyone, including oneself, will be stronger if these forbearances are one's guide. Each source of those ten pariksaha (patience and forbearances) are:[28][29]

The classical literature of Hinduism exists in many Indian languages. For example, Tirukkuṛaḷ written between 200 BC and 400 AD, and sometimes called the Tamil Veda, is one of the most cherished classics on Hinduism written in a South Indian language. It too discusses patience and forbearance, dedicating Chapter 16 of Book 1 to it. Tirukkuṛaḷ suggests patience is necessary for an ethical life and one's long term happiness, even if patience is sometimes difficult in the short term. Some of the verse excerpts from this book are: "our conduct must always foster forbearance"; "one must patiently endure rude remarks, because it delivers us to purity"; "if we are unjustly wronged by others, it is best to conquer our hurt with patience, accept suffering, and refrain from unrighteous retaliation"; "it is good to patiently endure injuries done to you, but to forget them is even better"; "just as the Earth bears those who dig into her, one must with patience bear with those who despise us", and so on.[30][31][32]

The spiritual teacher Meher Baba stated that "[O]ne of the first requirements of the [spiritual] aspirant is that he should combine unfailing enthusiasm with unyielding patience....Spiritual effort demands not only physical endurance and courage, but also unshrinking forbearance and unassailable moral courage."[33]

In Human, All Too Human, philosopher Friedrich Nietzsche argued that "being able to wait is so hard that the greatest poets did not disdain to make the inability to wait the theme of their poetry." He notes that "Passion will not wait", and gives the example of cases of duels, in which the "advising friends have to determine whether the parties involved might be able to wait a while longer. If they cannot, then a duel is reasonable [because]...to wait would be to continue suffering the horrible torture of offended honor...".

Impatience is not just the opposite of patience or the lack of if, it is more than that. Impatience is also a cultural phenomenon in many respects. There are deep-rooted psychological and social reasons for both feelings of and displays of impatience.

The term 'road rage' is commonly used to refer to situations that are the result of some form of impatience, though of course there can be other factors involved. This phrase refers to circumstances where one or both drivers get into a confrontation in which they are emotionally involved. Driving anywhere in the world can be frustrating. However, attitudes towards annoying circumstances vary widely from one place to another. Excessive honking, as a further example of impatience, is very common in some countries, but not so much in others.

Behavior in restaurants and other public places is another example. People can often be rude and impatient toward other patrons, as well as to the staff serving customers. Although a customer may have legitimate complaints about something, there is really no justification to be difficult about it. On the other hand, there is no reason for staff to be surly or curt with customers, but it does happen, all too often.

Telephone service and support is another situation where customers can become impatient with company representatives. This may partly be the result of changes in how these support services work. In an effort to save expense costs, many organizations have automated part of all of these services. This starts off the process, in the customer's view, on a somewhat unpleasant note. By the time the client has maneuvered their way through the system, including being on hold for a significant length of time, and sometimes eventually reaching the wrong person for whatever reason, the customer is understandably upset.

These examples may explain impatience and related behaviors in various situations, but do not excuse it.

Impatience is usually viewed as a negative thing. However, it can have some advantages.

Being patient with one's condition or situation can be a form of complacency. Being impatient to do something useful can indeed be a good thing.