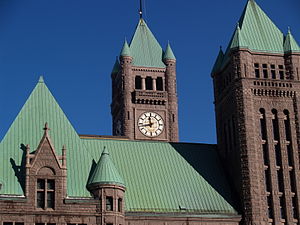 Copper roof on the Minneapolis City Hall, coated with patina 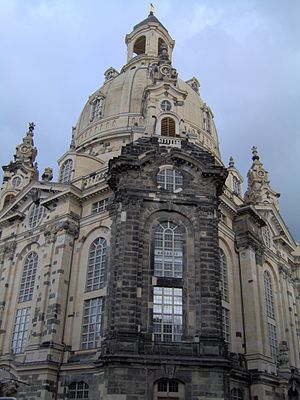 The Dresden Frauenkirche, with black patina on the older stones.

Patina (/ˈpætᵻnə/ or /pəˈtiːnə/) is a thin layer that variously forms on the surface of stone; on copper, bronze and similar metals (tarnish produced by oxidation or other chemical processes);[1] on wooden furniture (sheen produced by age, wear, and polishing); or any such acquired change of a surface through age and exposure. Patinas can provide a protective covering to materials that would otherwise be damaged by corrosion or weathering. They may also be aesthetically appealing.

On metal, patina is a coating of various chemical compounds such as oxides, carbonates, sulfides, or sulfates formed on the surface during exposure to atmospheric elements (oxygen, rain, acid rain, carbon dioxide, sulfur-bearing compounds), a common example of which is rust which forms on iron or steel when exposed to oxygen. Patina also refers to accumulated changes in surface texture and colour that result from normal use of an object such as a coin or a piece of furniture over time.[2]

Archaeologists also use the term "patina" to refer to a corticated layer that develops over time that is due to a range of complex factors on flint tools and ancient stone monuments.[1] This has led stone tool analysts in recent times to generally prefer the term "cortification" as a better term to describe the process than "patination".[3]

The word "patina" comes from the Latin for "shallow dish". Figuratively, patina can refer to any fading, darkening or other signs of age, which are felt to be natural or unavoidable (or both).

The chemical process by which a patina forms is called patination, and a work of art coated by a patina is said to be patinated. 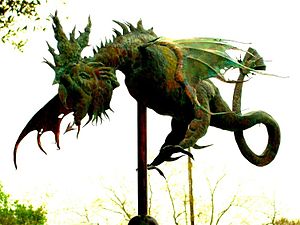 The Statue of Liberty gets its green color from the natural patina formed on its copper surface. 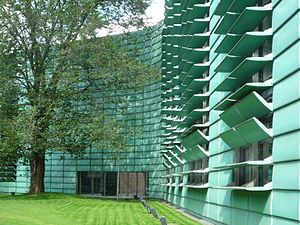 Natural copper patina at the Nordic Embassies, in Berlin, Germany.[6]

The green patina that forms naturally on copper and bronze, sometimes called verdigris, usually consists of varying mixtures of copper chlorides, sulfides, sulfates and carbonates, depending upon environmental conditions such as sulfur-containing acid rain.[7][8][9][10] In clean air rural environments, the patina is created by the slow chemical reaction of copper with carbon dioxide and water, producing a basic copper carbonate. In industrial and urban air environments containing sulfurous acid rain from coal-fired power plants or industrial processes, the final patina is primarily composed of sulphide or sulphate compounds.[11][12][13]

A patina layer takes many years to develop under natural weathering. Buildings in damp coastal/marine environments will develop patina layers faster than ones in dry inland areas.

Facade cladding (copper cladding; copper wall cladding) with alloys of copper, e.g. brass or bronze, will weather differently than "pure" copper cladding. Even a lasting gold colour is possible with copper-alloy cladding, for example Colston Hall in Bristol, or the Novotel at Paddington Central, London.

Often, antique and well-used firearms will develop a patina on the steel after the bluing, parkerizing, or other finish has worn. Firearms in this state are generally considered more valuable than ones that have been re-blued or parkerized. The patina protects the firearm from the more damaging rust that would occur were the patina to be polished off.

Artists and metalworkers often deliberately add patinas as a part of the original design and decoration of art and furniture, or to simulate antiquity in newly made objects. The process is often called distressing.

A wide range of chemicals, both household and commercial, can give a variety of patinas. They are often used by artists as surface embellishments either for color, texture, or both. Patination composition varies with the reacted elements and these will determine the color of the patina. For copper alloys, such as bronze, exposure to chlorides leads to green, while sulfur compounds (such as "liver of sulfur") tend to brown. The basic palette for patinas on copper alloys includes chemicals like ammonium sulfide (blue-black), liver of sulfur (brown-black), cupric nitrate (blue-green) and ferric nitrate (yellow-brown). For artworks, patination is often deliberately accelerated by applying chemicals with heat. Colors range from matte sandstone yellow to deep blues, greens, whites, reds and various blacks. Some patina colors are achieved by the mixing of colors from the reaction with the metal surface with pigments added to the chemicals. Sometimes the surface is enhanced by waxing, oiling, or other types of lacquers or clear-coats. More simply, the French sculptor Auguste Rodin used to instruct assistants at his studio to urinate over bronzes stored in the outside yard. A patina can be produced on copper by the application of vinegar (acetic acid). This patina is water-soluble and will not last on the outside of a building like a "true" patina. It is usually used as pigment.

Patina is also found on slip rings and commutators. This type of patina is formed by corrosion, what elements the air might hold, residue from the wear of the carbon brush and moisture; thus, the patina need special conditions to work as intended.

Patinas can also be found in woks or other metal baking dishes, which form when properly seasoned. The patina on a wok is a dark coating of oils that have been burned onto it to prevent food sticking and to enhance the flavor of the foods cooked in it. Steaming foods or using soap on a wok or other dishware could damage the patina and possibly allow rust.

Knife collectors that own carbon steel blades sometimes force a patina onto the blade to help protect it and give it a more personalized look. This can be done using various chemicals and substances such as muriatic acid, apple cider vinegar, or mustard. It can also be done by sticking the blade into any acidic vegetable or fruit such as an orange or an apple. 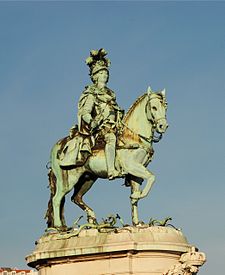 The admiralty brass statue of Joseph I of Portugal in Commerce Square, Lisbon, with a surface layer of green patina caused by advanced oxidation (2011). 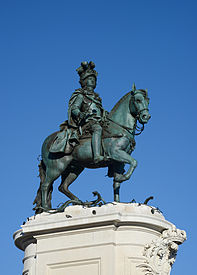 The same statue in 2015, after removal of the patina (2012-13), showing the original 1775 finish. The dark colour of the statue made English sailors call the square that houses it "Black Horse Square".

In the case of antiques, several views are held on the value of patination and its replacement if damaged, known as repatination.

Preserving a piece's look and character is important and removal or reduction may dramatically reduce its value. If patination has flaked off, repatination may be recommended.[14]

Appraiser Reyne Haines notes that "a repatinated metal piece will be worth more than one with major imperfections in the patina," but less than a piece still with its original finish.[14]