Patricia Highsmith (January 19, 1921 – February 4, 1995) was an American novelist and short story writer, known for her psychological thrillers, which led to more than two dozen film adaptations. Her first novel, Strangers on a Train, has been adapted for stage and screen numerous times, notably by Alfred Hitchcock in 1951. In addition to her series of five novels with Tom Ripley as protagonist, she wrote 17 additional novels and many short stories. Michael Dirda observed, "Europeans honored her as a psychological novelist, part of an existentialist tradition represented by her own favorite writers, in particular Dostoyevsky, Conrad, Kafka, Gide, and Camus."[2]

Highsmith was born Mary Patricia Plangman in Fort Worth, Texas. She was the only child of artists Jay Bernard Plangman (1889–1975), who was of German descent,[3] and his wife, Mary Plangman (née Coates; September 13, 1895 – March 12, 1991). The couple divorced ten days before their daughter's birth.[4] In 1927, Highsmith, her mother and her adoptive stepfather, artist Stanley Highsmith, whom her mother had married in 1924, moved to New York City.[4] When she was 12 years old, Highsmith was sent to Fort Worth and lived with her grandmother for a year. She called this the "saddest year" of her life and felt "abandoned" by her mother. She returned to New York to continue living with her mother and stepfather, primarily in Manhattan, but also lived in Astoria, Queens.

According to Highsmith, her mother once told her that she had tried to abort her by drinking turpentine, although a biography of Highsmith indicates Jay Plangman tried to persuade his wife to have the abortion but she refused.[4] Highsmith never resolved this love–hate relationship, which reportedly haunted her for the rest of her life, and which she fictionalized in her short story "The Terrapin", about a young boy who stabs his mother to death.[4][5] Highsmith's mother predeceased her by four years, dying at the age of 95.

Highsmith's grandmother taught her to read at an early age, and Highsmith made good use of her grandmother's extensive library. At the age of nine, she found a resemblance to her own imaginative life in the case histories of The Human Mind by Karl Menninger, a popularizer of Freudian analysis.[4]

In 1942, Highsmith graduated from Barnard College, where she studied English composition, playwriting, and the short story.[4] After graduating from college, she applied without success for work at such magazines as Harper's Bazaar, Vogue, The New Yorker, Mademoiselle, and Good Housekeeping, offering "impressive" recommendations from "highly placed" professionals.[4]

Before her short stories started appearing in print, Highsmith wrote for comic book publishers from 1942 and 1948, while she lived in New York City and Mexico. Answering an ad for "reporter/rewrite", she landed a job working for comic book publisher Ned Pines in a "bullpen" with four artists and three other writers. Initially scripting two comic-book stories a day for $55-a-week paychecks, Highsmith soon realized she could make more money by freelance writing for comics, a situation which enabled her to find time to work on her own short stories and live for a period in Mexico. The comic book scriptwriter job was the only long-term job Highsmith ever held.[4]

When Highsmith wrote the psychological thriller novel The Talented Mr. Ripley (1955), one of the title character's first victims is a comic-book artist named Reddington: "Tom had a hunch about Reddington. He was a comic-book artist. He probably didn't know whether he was coming or going."[7][page needed]

Highsmith's first novel was Strangers on a Train, published in 1950, which contained "the violence that became her trademark."[5] The book proved modestly successful when it was published in 1950. Alfred Hitchcock's 1951 film adaptation of the novel strengthened Highsmith's reputation.

Highsmith's second novel, The Price of Salt, was published under the nom de plume Claire Morgan.[8] It garnered attention as a lesbian novel because of its rare happy ending.[8] She did not publicly associate herself with this book until late in her life, probably because she had mined her personal life for the book's content.[4]

Her short stories appeared for the first time in Ellery Queen's Mystery Magazine in the early 1950s.

Her last novel, Small g: a Summer Idyll, was rejected by Knopf, her usual publisher by then, a few months before her death in February 1995.[9] It was published in the UK a month after her death by Bloomsbury Publishing, and nine years later in the US by W.W. Norton.[10]

Several of Highsmith's works have been adapted for other media, some more than once. There have been five adaptations of the Ripley novels, all independent of one another. In 1978, Highsmith was president of the jury at the 28th Berlin International Film Festival.[4][11] 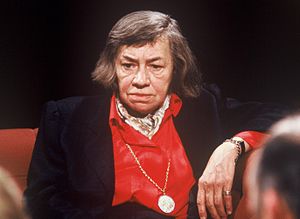 According to her biographer Andrew Wilson, Highsmith's personal life was a "troubled one;" she was an alcoholic who, allegedly, never had an intimate relationship that lasted for more than a few years, and she was seen by some of her contemporaries and acquaintances as misanthropic and cruel. She famously preferred the company of animals to that of people and once said, "My imagination functions much better when I don't have to speak to people."[16]

Highsmith loved cats, and she bred about three hundred snails in her garden at home in Suffolk, England.[17] Highsmith once attended a London cocktail party with a "gigantic handbag" that "contained a head of lettuce and a hundred snails" who she said were her "companions for the evening".[17]

"She was a mean, hard, cruel, unlovable, unloving person", said acquaintance Otto Penzler. "I could never penetrate how any human being could be that relentlessly ugly."[18] Other friends and acquaintances held different views of Highsmith. Gary Fisketjon, who published her later novels through Knopf, said that "she was rough, very difficult... but she was also plainspoken, dryly funny, and great fun to be around."[18] Phyllis Nagy, who adapted The Price of Salt into the film Carol, said that Highsmith was "very sweet" and "encouraging" to her as a young writer, as well as "wonderfully funny".[19][20]

Highsmith loved woodworking tools and made several pieces of furniture. She worked without stopping. In later life, her stance became stooped, with an osteoporotic hump.[4] Though her writing – 22 novels and 8 books of short stories – was highly acclaimed, especially outside of the United States, Highsmith preferred for her personal life to remain private.[8]

Highsmith was a lifelong diarist. She left behind eight thousand pages of handwritten notebooks and diaries.[21]

Highsmith had sexual relationships mostly with women.[22] She never married or had children.

From November 1948 until May 1949 Highsmith underwent psychoanalysis in an effort to "get myself in a condition to be married," as she wrote in her diary, with her then boyfriend Marc Brandel. She was incapable of enjoying sex with him — she wrote in a letter from 1970 to her stepfather, that it felt like "steel wool in the face, a sensation of being raped in the wrong place, leading to a sensation of having to have, pretty soon, a boewl [sic] movement," though she tried it with several men — and so submitted herself to twice-a-week therapy sessions. Ironically, this effort to turn straight inspired The Price of Salt, in which two women meet in a department store and begin a passionate affair.[24][25]

In early September 1951, she began an affair with sociologist Ellen Blumenthal Hill, traveling back and forth to Europe to meet with her.[4] When Highsmith and Hill came to New York in early May 1953, their affair ostensibly "in a fragile state," Highsmith began an "impossible" affair with the German homosexual photographer Rolf Tietgens, who had played a "sporadic, intense, and unconsummated role in her emotional life since 1943."[4] She was reportedly attracted to Tietgens on account of his homosexuality, confiding that she felt with him "as if he is another girl, or a singularly innocent man." Tietgens shot several nude photographs of Highsmith, but only one has survived.[26] It has been torn in half at the waist so that only her upper body appears.[4] She dedicated Two Faces of January (1964) to Tietgens.

Between 1959 and 1961, she fell in love with Marijane Meaker,[27] who wrote under the pseudonyms "Vin Packer" and "Ann Aldrich" and later wrote young adult fiction as "M.E. Kerr".[27][28] In the late 1980s, after 27 years of separation, Highsmith began corresponding with Meaker again, and one day showed up on Meaker's doorstep, slightly drunk and ranting bitterly. Meaker later said she was horrified at how Highsmith's personality had changed.[note 1]

Highsmith was a "consummate" atheist. She was never comfortable with black people, and she was outspokenly anti-semitic. When she was living in Switzerland in the 1980s, she used nearly 40 aliases when writing to various government bodies and newspapers deploring the state of Israel and the "influence" of the Jews. Nevertheless, some of her best friends were Jewish, such as authors Arthur Koestler[29] and Saul Bellow. Her work was assessed as having a "misogynist streak," [30] particularly after the publication of her short-stories collection Little Tales of Misogyny.[note 2]

Highsmith believed in American democratic ideals and in "the promise" of U.S. history, but she was also highly critical of the reality of the country's 20th-century culture and foreign policy. Tales of Natural and Unnatural Catastrophes, her 1987 anthology of short stories, was notoriously anti-American, and she often cast her homeland in a deeply unflattering light. Beginning in 1963, she resided exclusively in Europe.[4] She retained her United States citizenship, despite the tax penalties, of which she complained bitterly while living for many years in France and Switzerland.

Highsmith died of aplastic anemia and cancer in Locarno, Switzerland, aged 74. She was cremated at the cemetery in Bellinzona, and a memorial service was conducted at the Catholic Church in Tegna, Switzerland.[4]

She left her estate, worth an estimated $3 million, to the Yaddo colony, which had provided her with support in the 1940s, support that allowed her to produce her first novel.[5] Patricia Highsmith's literary estate is archived in the Swiss Literary Archives in Bern.[31]