Patrick Sarsfield, 1st Earl of Lucan (ca. 1660 – 21 August 1693) was an Irish Jacobite and soldier, belonging to an Anglo-Norman family long settled in Ireland.[1]

Sarsfield gained his first military experience serving with an Anglo-Irish contingent of the French Army during the 1670s. When James II came to the throne he was commissioned in the English Army, and served during the suppression of Monmouth's Rebellion in 1685. During the Glorious Revolution of 1688 he remained loyal to James and led an English cavalry detachment at the Battle of Wincanton, the only military engagement of the campaign.

In 1689 Sarsfield accompanied James to Ireland and served in the Jacobite Irish Army. After an early setback at Sligo, he became one of the celebrated Jacobite leaders of the war, noted in particular for Sarsfield's Raid shortly before the Siege of Limerick in 1690. James rewarded him by making him an Earl in the Peerage of Ireland. After the war's end following a second siege of Limerick in 1691, he led the Flight of the Wild Geese which took thousands of Irish soldiers into exile in France where they continued to serve James. After a planned invasion of England had to be abandoned following a French naval defeat in 1692, he served in Flanders and was killed at the Battle of Landen in 1693.

Sarsfield was born in Lucan c. 1660. His father was Patrick Sarsfield. His mother was Anne O'More, daughter of Rory (Roger) O'Moore, who organised the Irish Rebellion of 1641, and niece of Rory Óg O'More. The extended family of the powerful family of O'Mores, an estimated 120 people, had been virtually wiped out by the English during the Massacre of Mullaghmast.

His paternal family were Roman Catholics of Norman origin (by this time the origin was known as "Old English") and possessed an estate with an income of £2,000 a year. His father had been implicated in the 1641 Rebellion, supported the Irish Confederacy during the subsequent war, and assisted the Anglo-Irish Royalist forces against the English Republicans during the Siege of Dublin (1649). Following the Cromwellian conquest of Ireland Patrick Sarsfield senior had his Leinster estates confiscated and was transplanted to Connacht where he was given a smaller estate. Some sources suggest that his son Patrick was born while the family was in the west of Ireland.

Following the Restoration of Charles II in 1660, the Sarsfields made attempts to recover their lost estates but the Court of Claims found them guilty of taking part in the initial rebellion. The family's fortunes were boosted by the marriage of Patrick's elder brother William Sarsfield to Mary Crofts, widely believed to be an illegitimate daughter of King Charles and a Welsh mother Lucy Walter, and the younger sister of James Scott, Duke of Monmouth. The King now intervened on the Sarsfield's behalf and agreed a compromise in which Lucan Manor would be restored to the Sarsfield family following the death of its current occupant Colonel Theophilus Jones.

Following the death of his nephew Charles Sarsfield, Patrick advanced his own claim to Lucan Manor with the legal assistance of his cousin Francis Sarsfield.

Patrick, who was a younger son, entered Dongan's Regiment of Foot on 6 February 1678.[1] He was a tall, good-looking man, popular and beloved with his people.

In his early years he is known to have challenged Lord Grey for a supposed reflection on the veracity of the Irish people (September 1681), and in the December of that year he was run through the body in a duel in which he engaged as second.[1]

In 1682–83 while in London, Sarsfield took part in two abductions of heiresses. In May 1682 he helped his friend Captain Robert Clifford to abduct Ann Siderlin, a wealthy widow, and was considered lucky not to be prosecuted. Then he abducted Elizabeth Herbert, the widowed daughter of Lord Chandos, on his own account. Elizabeth refused to marry him, but agreed not to prosecute him in exchange for her freedom.[2]

During the last years of the reign of Charles II he saw service in the English regiments that were attached to the army of Louis XIV of France. The accession of James II led to his return home.[1]

He took part in the suppression of the Monmouth Rebellion at the Battle of Sedgemoor on 6 July 1685. In the following year, he was promoted to a colonelcy. King James had remodelled the Irish army from a Protestant-led force to a Catholic-led one, and Sarsfield, whose family was Roman Catholic,[1] was selected to assist in this reorganisation. He went to Ireland with Richard Talbot, 1st Earl of Tyrconnell, who was appointed commander-in-chief by the King.[1] 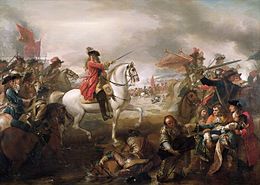 In 1688 the death of his elder brother, who had no son, made Sarsfield the heir to the family estate, which didn't bring him much money while he was on the losing side of a civil war.

Sarsfield sat in the 1689 "Patriot Parliament" as a member for Dublin County.

The Catholic King James came into Ireland with the backing of Louis XIV attempting to regain his throne from his son-in-law, the Protestant William of Orange. William had been invited to invade England by a group of influential political and religious leaders, in what became known in England as the "Glorious Revolution", in 1688. Louis XIV was the terror of Europe at this time, spreading French hegemony across the continent.

The majority of Irish people supported James due to his 1687 Declaration of Indulgence or, as it is also known, the Declaration for the Liberty of Conscience, which granted religious freedom to all denominations in England and Scotland. James had promised the Irish Parliament an eventual right to self-determination.

For English and English-descended people in Ireland, which had been invaded by thousands of 'planters' during the preceding century in the Elizabethan and Cromwellian Plantations, the war was about maintaining Protestant and English rule in Ireland. They feared for their lives and their property if James and his Catholic supporters were to rule Ireland, and they distrusted his promise of tolerance for all religions.

Sarsfield came with King James in command of the Irish soldiers James brought.[1] King James's army also included French, Dutch, Danes, Swedes, and Prussians, or Brandenburghers. The Irish army was largely composed of recruits, little drilled and badly armed.[3] Sarsfield's soldiers were involved in battles with soldiers in the service of William of Orange through the streets of Reading and at Wincanton.[1]

During the earlier part of the Williamite war in Ireland Sarsfield secured Connacht for the Jacobites.

The Battle of the Boyne (1 July 1690), in which the Pope backed and financed William of Orange as part of the Papal States, while Louis XIV of France backed James to further his own imperial ambitions, was a disaster for Ireland, but Sarsfield emerged as its hero.

At the Boyne and also during the Siege of Limerick in August and September 1690, Sarsfield became prominent as a leader. He captured a convoy of military stores and artillery vital to the English at Ballyneety, near Pallasgreen between Limerick and Tipperary,[1] in a raid guided by a renowned rapparee, Galloping O'Hogan.[4] This delayed the siege of the town and flooding rains forced the English to retire.[1]

James FitzJames, the Duke of Berwick, King James's illegitimate son, jealously claimed that this achievement turned Sarsfield's head. It certainly made him the popular hero of the war. His generosity and courage had already commended Sarsfield to the affection of his people. 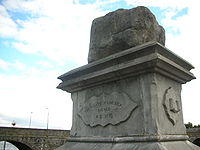 The Treaty Stone of Limerick.

King James is said to have described him as a brave fellow who had no head—unlike himself, since at the first intimation of defeat James fled, and was the very first to reach Dublin, 50 kilometres away. Sarsfield bitterly exclaimed: "Change kings and we will fight you over again",[5] as recorded by Gilbert Burnet.[6] (King James was forever after known in Ireland as Séamas a' Chaca, or James the Shit.)

On the evening after the battle, James's Irish supporters retreated in good order southwards through Duleek to Dublin. In the Vatican a Te Deum was sung in gratitude for King William's victory.

When James's cause was ruined, Sarsfield arranged the Treaty of Limerick and sailed to France on 22 December 1691 leading 19,000 of his countrymen to enter the French service in the first phase of the military denuding of Ireland known as the Flight of the Wild Geese. That year James created him Earl of Lucan.,[7] and promoted him to the rank of brigadier and then to major-general.[1]

Sarsfield received a commission as lieutenant-general (maréchal-de-camp) from the King of France, Louis XIV and fought with distinction in Flanders until he was mortally wounded at the Battle of Landen just three years later on 19 August 1693.[7] He died two or three days after the battle, at Huy, Belgium,[7] where he is buried in the grounds of St Martin's Church. A plaque on the wall of this church marks the approximate location of his grave.[citation needed] He was quoted as watching his lifeblood ebbing away, and saying "Oh, if only this were for Ireland".[8]

Sarsfield married Lady Honora Burke (or de Burgh), daughter of John Burke, 9th Earl of Clanricarde, by whom he had one son, James Sarsfield, 2nd Earl of Lucan, who died childless in 1718.[7]

Patrick Sarsfield is sometimes said to be the father of Catalina Sarsfield, who married the German adventurer Theodor von Neuhoff who briefly ruled as King of Corsica. She was in fact the daughter of David Sarsfield, a distant cousin of Patrick's from the Cork branch of the family. A maternal great-great-great-great-grandson was General Michael Corcoran, a commander of the Union Army during the American Civil War.[9]

The title Earl of Lucan recreated in 1795 for Sarsfield's great-nephew Charles Bingham.[10]

Part of the route Sarsfield took for his daring attack on the Williamite siege train is marked out today as Sarsfield's Ride, and is a popular walking and cycling route through County Tipperary, County Clare and County Limerick. Sarsfield Rock, which overlooks the site of the attack, is marked by a plaque commemorating his victory

Sarsfield House, a large office block in Limerick, is the office of the Revenue Commissioners.[12]

Elsewhere in Ireland, a number of GAA clubs bear the name of Sarsfield. A fine portrait of Sarsfield by John Riley (1646–91) hangs in the National Gallery of Ireland.[13]

Part of the California Army National Guard, Bravo Company, 184th Infantry Regiment out of Dublin, California was called the Sarsfield Grenadier Guards at a time when the unit comprised soldiers of Irish birth or descent.[15]

The 19th-century song Jackets Green commemorates Sarsfield's soldiers and their loss to Ireland.