Paul Ellering (born August 22, 1953) is an American retired professional wrestling manager and weightlifter. Ellering spent most of his wrestling career managing the Road Warriors (Animal and Hawk), working with them from 1981 to 1991 and again on occasions between 1992 and 1997. In addition to being their on screen manager he actually handled the team's affairs outside the ring as well, including contract negotiations and travel arrangements. Ellering, and the Road Warriors were inducted into both the Professional Wrestling Hall of Fame and the WWE Hall of Fame in 2011.

Prior to becoming a manager he was a professional wrestler, but retired in 1981 to become a full-time manager, only wrestling on special occasions. In the late 1990s he was involved in a storyline where he actually turned on the Road Warriors and managed Disciples of Apocalypse as they fought the Road Warriors. After retiring from being manager he raced in the Iditarod sled dog race.

Before entering the wrestling business, Ellering was an accomplished weightlifter, setting a world record in the deadlift at 745 pounds (338 kg).

Ellering was trained in Minneapolis, Minnesota at a camp run by American Wrestling Association (AWA) owner and promoter Verne Gagne and wrestler/trainer Eddie Sharkey in the mid 1970s. According to Ellering's RF Video shoot interview, of the thirty-plus trainees in the camp, only himself and later AWA mid-card wrestler Steve Olsonoski (a.k.a. Steve O) made it through the camp. Ellering would later go on to wrestle in singles and tag teams for Gagne in the AWA, Bill Watts's Mid-South promotion, and for Jerry Jarrett's Memphis promotion, where he was paired with manager Jimmy Hart. His notable feuds were with Jesse Ventura as a face, and as a heel with Jerry Lawler and Jimmy Valiant, from whom he won the AWA Southern Heavyweight Championship.

While wrestling for Mid South Wrestling, Ellering severely injured his knee in a match with Robert Gibson, reinjuring it after returning to the ring, which ended his full-time wrestling career. Georgia booker Ole Anderson recognized his speaking ability, however, and gave him a job as a manager.[1]

Ellering is best known for managing The Road Warriors, also known as the Legion of Doom, from 1981 until 1997 during their stints in the American Wrestling Association, the National Wrestling Alliance, New Japan Pro Wrestling, and the World Wrestling Federation in 1992.[2] Ellering was also the real-life manager for the team; he booked their matches, lined up their flights, set up hotel reservations, and kept track of their expenses.[2]

Throughout 1998 he managed the Disciples of Apocalypse, who were then feuding with the Legion of Doom; according to Ellering and Animal on the Road Warriors DVD, Ellering had a hard time working with another team against Hawk and Animal, and had difficulty ripping on his former team on the microphone. By the end of his second WWF run, though, he was back to managing the LOD, most notably on Sunday Night Heat, during a tag-team battle royal for a shot at the tag titles later in the night at WrestleMania XV, though they were unsuccessful.

Although primarily a manager, Ellering has stepped between the ropes as a competitor, notably at the 1987 NWA Great American Bash in which he joined the Road Warriors, Nikita Koloff, and Dusty Rhodes to face The Four Horsemen and their manager James J. Dillon in the first ever WarGames match. Ellering would also face Teddy Long in a 'Hair vs. Hair' match at the World Championship Wrestling Capital Combat event in 1990, coming away with a victory.

In 2011, Ellering was inducted into the WWE Hall of Fame, along with the Road Warriors, by "The American Dream" Dusty Rhodes. 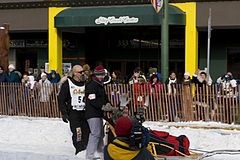 Ellering on Fourth Avenue in Anchorage during the ceremonial start of the 2006 Iditarod.

After retiring from professional wrestling, he traveled to Alaska to become a sled dog racer, participating in the Iditarod.[3] In 2000 he came in 54th place[4]

He currently owns and operates The Historic Rock Tavern in Grey Eagle, Minnesota, on Big Birch Lake. He has three children: Rebecca, Rachael and Saul. His daughter Rachael won the bronze medal at the 2014 World Powerlifting Championships.[5] She made her professional wrestling debut in December 2015.[6] She made her WWE debut against Alexa Bliss in WWE NXT in 2016, with the episode airing on May 11, 2016. [7]