Paul Julius Gottlieb Nipkow (22 August 1860 – 24 August 1940) was a German technician and inventor. He invented the Nipkow disk, one of the first successful technologies for television transmission. Hundreds of stations experimented with television broadcasting using the Nipkow system in the 1920s and 1930s, until it was superseded by all-electronic systems in the 1940s.

Nipkow was born in Lauenburg (now Lębork) in the Prussian province of Pomerania, now part of Poland. While at school in neighbouring Neustadt (now Wejherowo), in the province of West Prussia, Nipkow experimented in telephony and the transmission of moving pictures. After graduation, he went to Berlin in order to study science. He studied physiological optics with Hermann von Helmholtz, and electro-physics with Adolf Slaby. 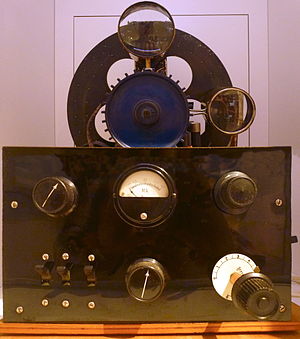 A television receiver using a Nipkow disk in the Tekniska museet, Stockholm.

While still a student he conceived the idea of using a spiral-perforated disk (Nipkow disk), to divide a picture into a mosaic of points and lines. Accounts of its invention state that the idea came to him while sitting alone at home with an oil lamp on Christmas Eve, 1883. Alexander Bain had transmitted images telegraphically in the 1840s but the Nipkow disk improved the encoding process.

He applied to the imperial patent office in Berlin for a patent covering an electric telescope for the electric reproduction of illuminating objects, in the category "electric apparatuses". This was granted on 15 January 1885, retroactive to January 6, 1884. It is not known whether Nipkow ever attempted a practical realization of this disk but one may assume that he himself never constructed one. The patent lapsed after 15 years owing to lack of interest. Nipkow took up a position as a designer at an institute in Berlin-Buchloh and did not continue work on the broadcasting of pictures.

The first television broadcasts used an optical-mechanical picture scanning method, the method that Nipkow had helped create with his disk; he could claim some credit for the invention. Nipkow recounted his first sight of television at a Berlin radio show in 1928: "the televisions stood in dark cells. Hundreds stood and waited patiently for the moment at which they would see television for the first time. I waited among them, growing ever more nervous. Now for the first time I would see what I had devised 45 years ago. Finally I reached the front row; a dark cloth was pushed to the side, and I saw before me a flickering image, not easy to discern." The system demonstrated was from John Logie Baird's Baird Television Company.

From 1936, when the infant BBC Television Service chose it above Baird's mechanical system, total electronic picture scanning, based on the work of Manfred von Ardenne and the iconoscope invented by Vladimir Zworykin, became increasingly prevalent and Nipkow's invention was no longer essential to further development of television.

Germany's first public television channel, started in Berlin in 1935, was named Fernsehsender Paul Nipkow after Paul Nipkow - the "spiritual father" of the core element of first generation television technology. He became honorary president of the "television council" of the "Imperial Broadcasting Chamber". Nipkow died in Berlin.