Paul Greengrass (born 13 August 1955) is an English film director, screenwriter and former journalist. He specialises in dramatisations of real-life events and is known for his signature use of hand-held cameras. His early film Bloody Sunday won the Golden Bear at 52nd Berlin International Film Festival. Other films he has directed include three in the Bourne action/thriller series: The Bourne Supremacy (2004), The Bourne Ultimatum (2007) and the upcoming film Jason Bourne (2016); United 93 (2006), for which he won the BAFTA Award for Best Director, and received an Academy Award for Best Director nomination, Green Zone (2010) and Captain Phillips (2013).

In 2007 Greengrass co-founded Directors UK, a professional organization of British filmmakers, and was its first President until 2014.

Greengrass was born 13 August 1955 in Cheam, Surrey, England. His mother was a teacher and his father a river pilot and merchant seaman.[1][2] He is the brother of noted English historian Mark Greengrass. Greengrass was educated at Westcourt Primary School, Gravesend Grammar School and Sevenoaks School and attended Queens' College, Cambridge.[3] In October 2012, he received an honorary degree from Kingston University in recognition of his “outstanding contribution to television and cinema".[4]

He first worked as a director in the 1980s, for the ITV current affairs programme World in Action; his investigation of timber-framed house construction has been cited as preventing its widespread adoption in England.[5] At the same time he co-authored the notorious book Spycatcher with Peter Wright, former assistant director of MI5, which contained enough sensitive information that the British Government made an unsuccessful attempt to ban it.[6] 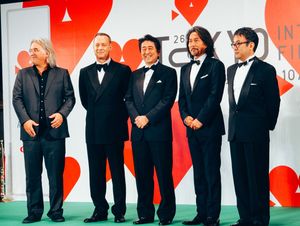 He then moved into drama, directing non-fiction made-for-television films such as The One That Got Away, based on Chris Ryan's book about SAS actions in the Gulf War and The Fix, based on the story of the betting scandal which shook British football in 1964.

His 1998 film The Theory of Flight starred Kenneth Branagh and Helena Bonham Carter, who played a woman with motor neurone disease. The film dealt with the difficult issue of the sexuality of people with disabilities.

Greengrass co-wrote the screenplay for Omagh, which depicted the 1998 bombing of Omagh and directed The Murder of Stephen Lawrence (1999), which told the story of Stephen Lawrence, a black youth whose murder was not properly investigated by the Metropolitan Police, and his mother's investigations, which led to accusations about institutional racism in the police.

Bloody Sunday (2002), depicted the 1972 Bloody Sunday shootings of Irish anti-internment activists by British soldiers in an almost documentary style; it shared First Prize at the 2002 Berlin Film Festival with Hayao Miyazaki's Spirited Away. Bloody Sunday was inspired by Don Mullan's politically influential book Eyewitness Bloody Sunday (Wolfhound Press, 1997). Mullan was a schoolboy witness of the events of Bloody Sunday. The book is credited as a major catalyst in the establishment of the new Bloody Sunday Inquiry chaired by Lord Saville. The inquiry, the longest running and most expensive in British legal history, led to an historic apology by Prime Minister David Cameron on 15 June 2010. Mullan was co-producer and actor in Bloody Sunday.

Based on that film, Greengrass was hired to direct 2004's The Bourne Supremacy, a sequel to the 2002 film The Bourne Identity, after the first film's director, Doug Liman, left the project. The film starred Matt Damon as Jason Bourne, an amnesiac who realises he was once a top CIA assassin and is now being pursued by his former employers. It proved to be an unexpectedly enormous financial and critical success, and secured Greengrass's reputation and ability to get his smaller, more personal films made.[citation needed]

In 2006, Greengrass directed United 93, a film based on the 11 September 2001 hijacking of United Airlines Flight 93. The film received immense critical acclaim, particularly for Greengrass' again quasi-documentary-style directing. After receiving many Best Director awards and nominations from critics' circles (including the Broadcast Film Critics Association), Greengrass won the BAFTA award for Best Director at the 60th British Academy Film Awards and received an Oscar nomination for Achievement in Directing at the 79th Academy Awards. For his role in writing the film, he earned the Writers Guild of America Award and BAFTA nominations for Best Original Screenplay.

He followed this with a return to the Bourne franchise. The Bourne Ultimatum, released in 2007, was an even bigger success than the previous two films and provided him with yet another BAFTA nomination for Best Director at the 61st British Academy Film Awards.

In 2007, he co-founded Directors UK, a professional association for British directors, and was its first President until he stepped down from that position in July 2014.[7][8]

Green Zone stars Matt Damon as the head of a U.S. military team on an unsuccessful hunt for weapons of mass destruction in post-war Iraq. It was filmed in Spain and Morocco and released in 2010.[9] The film was first announced as being based on the bestselling, award-winning non-fiction book Imperial Life in the Emerald City, by the Washington Post's Baghdad bureau chief, Rajiv Chandrasekaran. However the final film is a largely fictionalized action thriller only loosely inspired by events in the book.

Captain Phillips, Greengrass's film about the Maersk Alabama hijacking in 2009, was based on the book A Captain's Duty, and starred Tom Hanks, Barkhad Abdi and Faysal Ahmed. It was shot in the 2012 in Massachusetts, Virginia and Malta and was released on 11 October 2013.

He is next set to direct an adaptation of Robert Harris's bestselling novel The Fear Index, a thriller centring on the connection of a fictional Geneva hedge fund to the 2010 Flash Crash. The film will be produced by Twentieth Century Fox.[10]

It was announced in late July 2013 that Greengrass was in final talks to direct Aaron Sorkin's script about the Chicago Seven, a project to which Steven Spielberg had been attached.[11]

In September 2012 Universal Pictures stated that it is likely to release more Bourne films, despite The Bourne Legacy being given mixed reviews by critics.[12] On 21 February 2013 it was confirmed that a fifth Bourne film was being planned.[13][14] On 2 August 2013, Universal has hired Tony Gilroy to pen the film's script and Renner will be returning as Cross.[15]

On 10 October 2014 it was confirmed by Matt Damon that he is returning for the fifth Jason Bourne movie with Paul Greengrass as director, and that it will be released on July 29, 2016.[16]

Sony Pictures announced that Greengrass will be the director of an upcoming version of the George Orwell novel 1984. James Graham will write the screenplay.[17]