Paul Stewart Lawrie OBE (born 1 January 1969) is a Scottish professional golfer who is best known for winning The Open Championship in 1999. 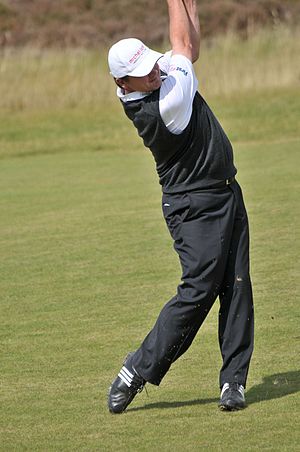 Lawrie at the Scottish Hydro Challenge

Lawrie was born in Aberdeen. He turned professional in 1986 and became a member of the European Tour in 1992. He performed steadily without doing much to draw attention to himself, aside from a 6th-place finish in the 1993 Open Championship. In his first seven seasons his only top 50 finish on the Order of Merit came in 1996 when he was 21st. However he also finished in the top 100 in all but one of the other six seasons, and picked up a debut tour win at the 1996 Catalan Open.

Lawrie's career was transformed in 1999. After winning the Qatar Masters, which is a European Tour event, early in the season, he went on to win the 1999 Open Championship at Carnoustie in July.[2] This was the Open where the Frenchman Jean van de Velde blew a three-shot lead on the final hole. Lawrie won a four-hole playoff against Van de Velde and American Justin Leonard. An unusual aspect of Lawrie's victory was that he was neither leader nor co-leader at any time during his regulation 72 holes, only moving into a share of the lead when the leaders came back to him after he had completed his final round. Also, Lawrie came back from the largest third-round deficit ever faced by a major championship winner; going into the final day, he trailed the leader, Van de Velde, by 10 shots. This is also the record for the biggest final-round comeback on the PGA Tour.[3]

After his major championship victory, Lawrie's game shifted to a higher level without quite moving him into the global elite group of golfers. He finished 9th on the European Tour Order of Merit in 1999; 6th in 2001, when he captured the lucrative Dunhill Links Championship; and 10th in 2002, when he won his fifth European Tour title at the Celtic Manor Resort Wales Open.

In March 2001, the Paul Lawrie Foundation was created. The Foundation aims to support and sustain an interest and enthusiasm for the game of golf amongst under 18s. Activities are delivered in a fun and relaxed setting with equipment provided if necessary. The Foundation has grown rapidly and now includes football and hockey.[2][4] In 2011, a 54 hole tournament, the Paul Lawrie Invitational was added to the Tartan Tour.

After winning the Open, Lawrie was a member of the PGA Tour for several seasons, while also continuing to compete on the European Tour. He enjoyed little success in the U.S. and when his five-year major championship exemption expired at the end of the 2004 season, he lost his PGA Tour card. 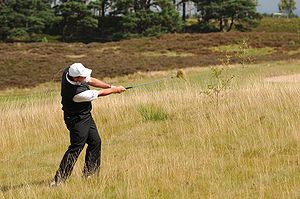 Lawrie comes out from the rough at the Scottish Hydro Challenge

At the 2009 Open Championship at Turnberry, Lawrie scored what is believed to be only the eighth albatross (double eagle) in the competition's 150-year history by holing his second shot at the par 5 seventh hole in the final round.[5]

On 27 March 2011, Lawrie won the Open de Andalucía de Golf by one stroke over Johan Edfors. Lawrie finished the championship at −12 and in doing so ended a nine-year period without a tour win.[6]

In February 2012, Lawrie won the Commercialbank Qatar Masters for the second time in his career, having previously won in 1999. Lawrie became only the second player to have the won the tournament more than once alongside Adam Scott. It was Lawrie's seventh win on the European Tour. The tournament was reduced to 54 holes after strong winds hampered the play during rounds one and two. He won by four strokes over Jason Day and Peter Hanson after a final round of 65.

Lawrie skipped the 2012 U.S. Open in an attempt to qualify for the 2012 Ryder Cup. He secured qualification with victory at the Johnnie Walker Championship at Gleneagles in August. He has stated that he would accept the captain's role for the 2014 Ryder Cup if offered.[7] Lawrie helped Team Europe retain the Ryder Cup at Medinah.[8] He finished the season in the top 10 of the Order of Merit for the first time in ten years.

Lawrie is passionate about junior golf and his Paul Lawrie Foundation has taught thousands of youngsters. In 2012, he also bought Aspire Golf Centre in Aberdeen (now called the Paul Lawrie Golf Centre). Partly due to this, he was named by the Golf Club Managers' Association's Golf Club Management magazine as the 37th most powerful person in British golf. Lawrie is a fan of Aberdeen FC.[11]

Lawrie was also a columnist for bunkered golf magazine between 1999 and 2004.

* Note: The 2012 Commercialbank Qatar Masters was reduced to 54 holes due to strong winds.