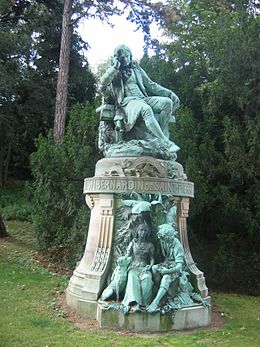 Bernardin de Saint-Pierre memorial in the Jardin des Plantes, Paris; Paul and Virginie in the pedestal.

Paul et Virginie (or Paul and Virginia) is a novel by Jacques-Henri Bernardin de Saint-Pierre, first published in 1788. The novel's title characters are friends since birth who fall in love. The story is set on the island of Mauritius under French rule, then named Île de France. Written on the eve of the French Revolution, the novel is recognized as Bernardin's finest work. It records the fate of a child of nature corrupted by the artificial sentimentality of the French upper classes in the late eighteenth century. Bernardin de Saint-Pierre lived on the island for a time and based part of the novel on a shipwreck he witnessed there.[1]

Bernardin de Saint-Pierre's novel criticizes the social class divisions found in eighteenth-century French society. He describes the perfect equality of social relations on Mauritius, whose inhabitants share their possessions, have equal amounts of land, and all work to cultivate it. They live in harmony, without violence or unrest. The author's beliefs echo those of Enlightenment philosophers such as Jean-Jacques Rousseau.[2] He argues for the emancipation of slaves. He was a friend of Mahé de La Bourdonnais, the governor of Mauritius, who appears in the novel providing training and encouragement for the island's natives. Although Paul and Virginie own slaves, they appreciate their labour and do not treat them badly. When other slaves in the novel are mistreated, the book's heroes confront the cruel masters.

The novel presents an Enlightenment view of religion: that God, or "Providence," has designed a world that is harmonious and pleasing. The characters of Paul et Virginie live off the land without needing technology or man-made interference. For instance, they tell time by observing the shadows of the trees. One critic noted that Bernadin de Saint-Pierre "admired the forethought which ensured that dark-coloured fleas should be conspicuous on white skin", believing "that the earth was designed for man’s terrestrial happiness and convenience".

Thomas Carlyle in The French Revolution: A History, wrote: "[It is a novel in which] there rises melodiously, as it were, the wail of a moribund world: everywhere wholesome Nature in unequal conflict with diseased, perfidious art; cannot escape from it in the lowest hut, in the remotest island of the sea."[3]

The novel's fame was such that when the participants at the Versailles Peace Conference in 1920 considered the status of Mauritius, the New York Times headlined its coverage:[4]