Paula Garcés (March 20, 1974) is a Colombian American film and television actress, known for her appearance in films such as Clockstoppers and The Harold and Kumar Series, and on TV shows such as CSI: Miami, The Shield, Law and Order: Special Victims Unit, The Sopranos, Oz, Devious Maids and All My Children.

She played Alvina in 1995's Dangerous Minds with Michelle Pfeiffer.

Garcés was next seen opposite Academy Award-winner Tommy Lee Jones in the Revolution Studios feature, Man of the House. In 2004 she starred in National Lampoon's Pledge This!. She was featured on CSI: Miami and starred in a six episode arc on NBC's Law and Order: Special Victims Unit, as well as guest spots on HBO's hit series, The Sopranos and Oz. Garcés then landed a role as a cast member on The Shield.

Garcés appeared in New Line Cinema's Harold & Kumar Go to White Castle and its 2008 sequel Harold & Kumar Escape from Guantanamo Bay and in the 2011 sequel A Very Harold & Kumar 3D Christmas, as Maria, the love interest and later the wife of John Cho's character.

She was also featured in the video "Imagínate" with Wisin & Yandel, and rapper T-Pain.

Garcés has also co-starred on Guiding Light as Pilar Santos, and had a recurring role as Dr. Kelly Hernandez in the second season of the Syfy TV series Warehouse 13.

She is also the persona and voice behind Aluna, a character in S2 Games' multiplayer online battle arena title, Heroes of Newerth.[5][6]

In May 2011, Garcés appeared in "Off the Beaten Path", the 11th episode of the first season of Breakout Kings.

Garcés' first child is a daughter named Skye Mahoney, who was 21 as of 2013.[7] In 2002 she married Antonio Hernandez. Although she became pregnant twice by him, both pregnancies resulted in miscarriages.[8] In June 2013, it was announced that Garcés and Hernandez were expecting their first child together.[9] On November 20 she gave birth to a son, Antonio Andrés Hernandez.[10] 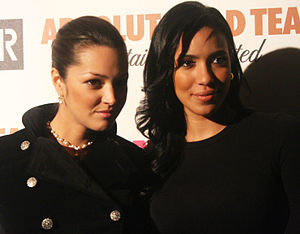 Garcés with Julissa Bermudez in March 2011