In mathematical physics and mathematics, the Pauli matrices are a set of three 2 × 2 complex matrices which are Hermitian and unitary.[1] Usually indicated by the Greek letter sigma (σ), they are occasionally denoted by tau (τ) when used in connection with isospin symmetries. They are 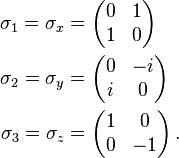 These matrices are named after the physicist Wolfgang Pauli. In quantum mechanics, they occur in the Pauli equation which takes into account the interaction of the spin of a particle with an external electromagnetic field.

Each Pauli matrix is Hermitian, and together with the identity matrix I (sometimes considered as the zeroth Pauli matrix σ0), the Pauli matrices (multiplied by real coefficients) form a basis for the vector space of 2 × 2 Hermitian matrices.

Hermitian operators represent observables, so the Pauli matrices span the space of observables of the 2-dimensional complex Hilbert space. In the context of Pauli's work, σk represents the observable corresponding to spin along the kth coordinate axis in three-dimensional Euclidean space ℝ3.

The Pauli matrices (after multiplication by i to make them anti-Hermitian), also generate transformations in the sense of Lie algebras: the matrices iσ1, iσ2, iσ3 form a basis for su(2), which exponentiates to the special unitary group SU(2). The algebra generated by the three matrices σ1, σ2, σ3 is isomorphic to the Clifford algebra of ℝ3, called the algebra of physical space.

All three of the Pauli matrices can be compacted into a single expression:

where i = √−1 is the imaginary unit, and δab is the Kronecker delta, which equals +1 if a = b and 0 otherwise. This expression is useful for "selecting" any one of the matrices numerically by substituting values of a = 1, 2, 3, in turn useful when any of the matrices (but no particular one) is to be used in algebraic manipulations.

where I is the identity matrix.

From above we can deduce that the eigenvalues of each σi are ±1.

Each of the (Hermitian) Pauli matrices has two eigenvalues, +1 and −1. The corresponding normalized eigenvectors are: 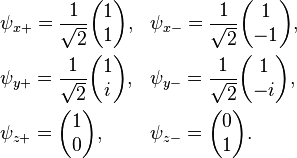 The Pauli vector is defined by[nb 1]

and provides a mapping mechanism from a vector basis to a Pauli matrix basis[2] as follows,

, and moreover (see completeness, below)

Its (unnormalized) eigenvectors are

where the structure constant εabc is the Levi-Civita symbol, Einstein summation notation is used, δab is the Kronecker delta, and I is the 2 × 2 identity matrix.

Relation to dot and cross product

Contracting each side of the equation with components of two 3-vectors ap and bq (which commute with the Pauli matrices, i.e., apσq = σqap) for each matrix σq and vector component ap (and likewise with bq), and relabeling indices a, b, c → p, q, r, to prevent notational conflicts, yields

Finally, translating the index notation for the dot product and cross product results in

Following traces can be derived using the commutation and anticommutation relations.

Exponential of a Pauli vector

one has, for even powers,

which can be shown first for the n = 1 case using the anticommutation relations.

Matrix exponentiating, and using the Taylor series for sine and cosine,

and, in the last line, the first sum is the cosine, while the second sum is the sine; so, finally,

which is analogous to Euler's formula. Note

while the determinant of the exponential itself is just 1, which makes it the generic group element of SU(2).

A more abstract version of formula (2) for a general 2 × 2 matrix can be found in the article on matrix exponentials. A general version of (2) for an analytic (at a and −a) function is provided by application of Sylvester's formula,[3]

The group composition law of SU(2)

A straightforward application of formula (2) provides a parameterization of the composition law of the group SU(2).[nb 2] One may directly solve for c in

which specifies the generic group multiplication, where, manifestly,

the spherical law of cosines. Given c, then,

Consequently, the composite rotation parameters in this group element (a closed form of the respective BCH expansion in this case) simply amount to[4]

The fact that any 2 × 2 complex Hermitian matrices can be expressed in terms of the identity matrix and the Pauli matrices also leads to the Bloch sphere representation of 2 × 2 mixed states' density matrix, (2 × 2 positive semidefinite matrices with trace 1). This can be seen by simply first writing an arbitrary Hermitian matrix as a real linear combination of {σ0, σ1, σ2, σ3} as above, and then imposing the positive-semidefinite and trace 1 conditions.

It is also straightforward to likewise work out the adjoint action on the Pauli vector, namely rotation effectively by double the angle a,

An alternative notation that is commonly used for the Pauli matrices is to write the vector index i in the superscript, and the matrix indices as subscripts, so that the element in row α and column β of the i-th Pauli matrix is σ iαβ.

In this notation, the completeness relation for the Pauli matrices can be written

Proof: The fact that the Pauli matrices, along with the identity matrix I, form an orthogonal basis for the complex Hilbert space of all 2 × 2 matrices means that we can express any matrix M as

where c is a complex number, and a is a 3-component complex vector. It is straightforward to show, using the properties listed above, that

where "tr" denotes the trace, and hence that

which can be rewritten in terms of matrix indices as

where summation is implied over the repeated indices γ and δ. Since this is true for any choice of the matrix M, the completeness relation follows as stated above.

As noted above, it is common to denote the 2 × 2 unit matrix by σ0, so σ0αβ = δαβ. The completeness relation can alternatively be expressed as

Relation with the permutation operator

Let Pij be the transposition (also known as a permutation) between two spins σi and σj living in the tensor product space ℂ2 ⊗ ℂ2,

This operator can also be written more explicitly as Dirac's spin exchange operator,

Its eigenvalues are therefore[5] 1 or −1. It may thus be utilized as an interaction term in a Hamiltonian, splitting the energy eigenvalues of its symmetric versus antisymmetric eigenstates.

The group SU(2) is the Lie group of unitary 2×2 matrices with unit determinant; its Lie algebra is the set of all 2×2 anti-Hermitian matrices with trace 0. Direct calculation, as above, shows that the Lie algebra

is the 3-dimensional real algebra spanned by the set {iσj}. In compact notation,

As a result, each iσj can be seen as an infinitesimal generator of SU(2). The elements of SU(2) are exponentials of linear combinations of these three generators, and multiply as indicated above in discussing the Pauli vector. Although this suffices to generate SU(2), it is not a proper representation of su(2), as the Pauli eigenvalues are scaled unconventionally. The conventional normalization is λ = 1/2, so that

As SU(2) is a compact group, its Cartan decomposition is trivial.

The Lie algebra su(2) is isomorphic to the Lie algebra so(3), which corresponds to the Lie group SO(3), the group of rotations in three-dimensional space. In other words, one can say that the iσj are a realization (and, in fact, the lowest-dimensional realization) of infinitesimal rotations in three-dimensional space. However, even though su(2) and so(3) are isomorphic as Lie algebras, SU(2) and SO(3) are not isomorphic as Lie groups. SU(2) is actually a double cover of SO(3), meaning that there is a two-to-one group homomorphism from SU(2) to SO(3), see relationship between SO(3) and SU(2).

The real linear span of {I, iσ1, iσ2, iσ3} is isomorphic to the real algebra of quaternions ℍ. The isomorphism from ℍ to this set is given by the following map (notice the reversed signs for the Pauli matrices):

Alternatively, the isomorphism can be achieved by a map using the Pauli matrices in reversed order,[6]

As the quaternions of unit norm is group-isomorphic to SU(2), this gives yet another way of describing SU(2) via the Pauli matrices. The two-to-one homomorphism from SU(2) to SO(3) can also be explicitly given in terms of the Pauli matrices in this formulation.

Quaternions form a division algebra—every non-zero element has an inverse—whereas Pauli matrices do not. For a quaternionic version of the algebra generated by Pauli matrices see biquaternions, which is a venerable algebra of eight real dimensions.

In classical mechanics, Pauli matrices are useful in the context of the Cayley-Klein parameters.[7] The matrix P corresponding to the position

of a point in space is defined in terms of the above Pauli vector matrix,

In quantum mechanics, each Pauli matrix is related to an angular momentum operator that corresponds to an observable describing the spin of a spin ½ particle, in each of the three spatial directions. As an immediate consequence of the Cartan decomposition mentioned above, iσj are the generators of a projective representation (spin representation) of the rotation group SO(3) acting on non-relativistic particles with spin ½. The states of the particles are represented as two-component spinors. In the same way, the Pauli matrices are related to the isospin operator.

An interesting property of spin ½ particles is that they must be rotated by an angle of 4π in order to return to their original configuration. This is due to the two-to-one correspondence between SU(2) and SO(3) mentioned above, and the fact that, although one visualizes spin up/down as the north/south pole on the 2-sphere S 2, they are actually represented by orthogonal vectors in the two dimensional complex Hilbert space.

For a spin ½ particle, the spin operator is given by J=ħ/2σ, the fundamental representation of SU(2). By taking Kronecker products of this representation with itself repeatedly, one may construct all higher irreducible representations. That is, the resulting spin operators for higher spin systems in three spatial dimensions, for arbitrarily large j, can be calculated using this spin operator and ladder operators. They can be found in Rotation group SO(3)#A note on Lie algebra. The analog formula to the above generalization of Euler's formula for Pauli matrices, the group element in terms of spin matrices, is tractable, but less simple.[8]

Also useful in the quantum mechanics of multiparticle systems, the general Pauli group Gn is defined to consist of all n-fold tensor products of Pauli matrices.

In relativistic quantum mechanics, the spinors in four dimensions are 4 × 1 (or 1 × 4) matrices. Hence the Pauli matrices or the Sigma matrices operating on these spinors have to be 4 × 4 matrices. They are defined in terms of 2 × 2 Pauli matrices as

It follows from this definition that

matrices have the same algebraic properties as

However, relativistic angular momentum is not a three-vector, but a second order four-tensor. Hence

needs to be replaced by

, the generator of Lorentz transformations on spinors. By the antisymmetry of angular momentum, the

are also antisymmetric. Hence there are only six independent matrices.

The first three are the