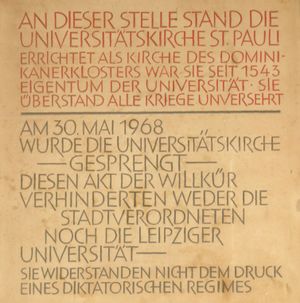 Plaque on the site of the church, noting its destruction[1] 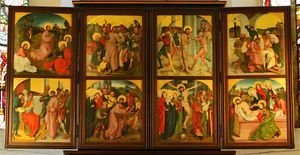 The Paulinerkirche was a church on the Augustusplatz in Leipzig, named after the "Pauliner", its original Dominican friars. It was built in 1231 as the Klosterkirche St. Pauli for the Dominican monastery in Leipzig. From the foundation of the University of Leipzig in 1409, it served as the university church. After the Protestant Reformation it was donated to the university and was inaugurated in 1545 by Martin Luther as the Universitätskirche St. Pauli (University Church of St Paul), later also called Unikirche. Johann Sebastian Bach was director of music for "festal" (holiday) services in 1723−25.

The church survived the war practically unscathed but was dynamited in 1968 during the communist regime of East Germany. After the reunification of Germany, it was decided to build a new university church on the site in the shape of the former church.[2] A new building, the Paulinum (formally: "Aula und Universitätskirche St. Pauli", i.e. "Assembly Hall and University Church St. Paul"), was built on the site beginning in 2007.

In 1229, friars of the Dominican Order settled in Leipzig and started in 1231 the building of the Paulinerkirche as their abbey church, within the city walls close to the gate "Grimmaisches Tor". It was built in the typical fashion of a church of a Mendicant order of the 13th century, with a choir and a nave with two aisles in the "Langhaus".[3] The church was consecrated in 1240 by archbishop Wilbrand from Magdeburg to St. Paul.[4] 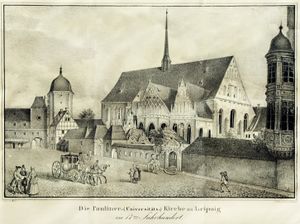 The Paulinerkirche in the 17th century, lithograph by Ernst Wilhelm Straßberger, ca. 1839

Since the foundation of the University of Leipzig in 1409, the church was closely related to the university.[3] A tradition of "Universitätsgottesdienst" (university service) started then,[4] with preachers appointed by the university since 1419.[5] The altar from the 15th century is now in the Thomaskirche.[6] Several faculty members of the university and their relatives were buried in the church, commemorated on epitaphs of artistic value, people such as Johann Christoph Marci (law), Christian Friedrich Franckenstein (historian) and Benedikt Carpzov (1595-1666, law), whose epitaph was restored in 2011.[7] Johann Tetzel, a Dominican preacher famous for selling indulgences, was buried in 1517.[3]

The church was used for services and, from 1543 to 1768, also as Aula, an auditorium for academic functions.[4] Samuel Rüling was music director in Leipzig, also for the Paulinerkirche, from 1610 to 1612, when he moved on to the Kreuzkirche in Dresden. Werner Fabricius was the first "Director musices Paulini" (director of music of St Paul) from 1656 to 1679. He was succeeded by Johann Schelle (1679–1701) and Johann Kuhnau (1701–1722).[12] An organ at the western wall was first heard on 2 November 1679. In 1717 the new organ by Johann Scheibe was inspected by Johann Sebastian Bach in his function as an organ consultant. Johann Gottlieb Görner was the organist from 1717. His comment was: "nicht gnugsam rühmen und loben können, sonderlich deren Raren Register" ([he could] not praise enough, especially its unusual stops).[4]

When Bach was cantor in Leipzig from 1723, he also performed "festal" (holiday) services at the Paulinerkirche in 1723-25, while Görner was director for regular Sunday services. Possibly Bach performed a new cantata already for Pentecost, Wer mich liebet, der wird mein Wort halten, BWV 59, on 16 May 1723, before he began his tenure as cantor at the Thomaskirche and the Nikolaikirche two weeks later, Sunday after Trinity.[13] On 17 October 1727 Bach performed the funeral ode Laß, Fürstin, laß noch einen Strahl, BWV 198, requested by the university to mark the death of Christiane Eberhardine, the wife of August II the Strong. Bach performed his motet Der Geist hilft unser Schwachheit auf, BWV 226, first on 21 October 1729 in a memorial service for Johann Heinrich Ernesti (1652-1729), rector of the Thomasschule.[4] Probably in 1733, Bach performed his cantatas Laßt uns sorgen, laßt uns wachen, BWV 213 (Hercules at the Crossroads), for the birthday of the heir to the throne of the elector, and Tönet, ihr Pauken! Erschallet, Trompeten! BWV 214, for the birthday of the queen, a cantata which he used as a model for parts of his Christmas Oratorio, namely its opening chorus.[3] Probably in 1735 Bach performed the homage cantata Die Freude reget sich, BWV 36b, to Johann Florens Rivinius on his appointment to the Rectorship of the university in October 1735. 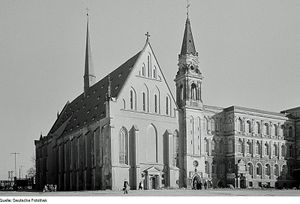 The Paulinerkirche, view from the west, 1951

During the Battle of Leipzig in 1813, the church served as a camp for hostages and a military hospital. In the 19th century most of the remaining buildings of the monastery were demolished and replaced by the Augusteum, built from 1831 to 1836. The church had originally faced the city walls, which were torn down in 1785. The church faced the new representative square, later called Augustusplatz. Therefore Albert Geutebrück erected in 1836 a Neoclassical facade, replaced by a Neo-Gothic facade of Arwed Roßbach in 1897.[3]

Felix Mendelssohn conducted his oratorio on the church's patron saint, Paulus, in the first performance in Leipzig on 16 March 1837.[3][14] The composer's funeral was held in the church on 7 November 1847.[4]

In 1907 Max Reger was appointed music director of the university.[4] 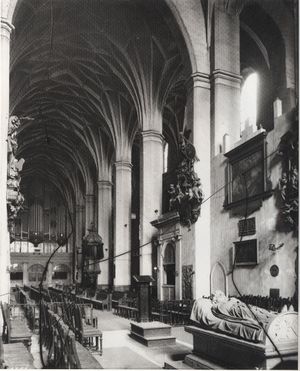 The church survived the war practically unscathed, unlike the Augusteum next to it. On 4 April 1968 the Universitätschor (choir of the university) performed Bach's St Matthew Passion, conducted by Hans-Joachim Rotzsch.[4]

On 30 May 1968, during the communist regime, and after a decision by the SED-led city administration and the university administration,[3][4] the Paulinerkirche was dynamited to make way for a redevelopment of the university, carried out between 1973 and 1978. Protestors against the blasting operation were arrested.

A plaque at the site was unveiled 25 years later, on 30 May 1993.[1][4] An A-frame sculpture in the dimensions and at the location of the former facade at the Augustusplatz was a memorial.[15]

The Paulineraltar, the Gothic altar, was rescued and is temporarily installed at the Thomaskirche.[5]

Since the 1990s the rebuilding of the church has been discussed. Among the people demanding a rebuilding is Nobel Prize-winning biologist Günter Blobel, arguing: 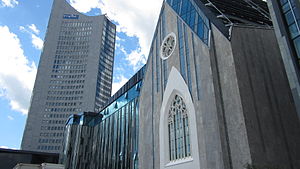 The new buildings at the University's main campus are inspired by the form and shape of the old church. The newly built heart of the university includes a room for common prayer and regular religious services situated exactly at the place of the former church.[4] The whole complex has a double function as a church (using the historical name Universitätskirche St. Pauli - University Church St. Paul) and as an Assembly Hall (Aula), the short name for the whole building is Paulinum. The first service in the new church was held on 6 December 2009, the second in Advent, including Bach's cantata Nun komm, der Heiden Heiland, BWV 61.[16]