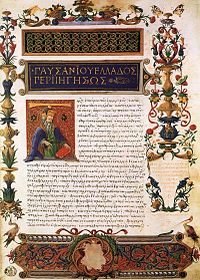 Manuscript (1485), of Pausanias' Description of Greece at the Laurentian Library

Pausanias (/pɔːˈseɪniəs/; Greek: Παυσανίας Pausanías; c. AD 110 – c. 180)[1] was a Greek traveler and geographer of the 2nd century AD, who lived in the times of Hadrian, Antoninus Pius and Marcus Aurelius. He is famous for his Description of Greece (Ἑλλάδος περιήγησις Hellados Periegesis)[2] a lengthy work that describes ancient Greece from firsthand observations, and is a crucial link between classical literature and modern archaeology. This is how Andrew Stewart assesses him:[3]

A careful, pedestrian writer, he is interested not only in the grandiose or the exquisite but in unusual sights and obscure ritual. He is occasionally careless, or makes unwarranted inferences, and his guides or even his own notes sometimes mislead him; yet his honesty is unquestionable, and his value without par.

Pausanias was born in 110 AD into a Greek family [4] and was probably a native of Lydia; he was certainly familiar with the western coast of Asia Minor, but his travels extended far beyond the limits of Ionia. Before visiting Greece, he had been to Antioch, Joppa and Jerusalem, and to the banks of the River Jordan. In Egypt, he had seen the pyramids, while at the temple of Ammon, he had been shown the hymn once sent to that shrine by Pindar. In Macedonia, he appears to have seen the alleged tomb of Orpheus in Libethra.[5] Crossing over to Italy, he had seen something of the cities of Campania and of the wonders of Rome. He was one of the first to write of seeing the ruins of Troy, Alexandria Troas, and Mycenae.

Pausanias' Description of Greece is in ten books, each dedicated to some portion of Greece. He begins his tour in Attica, where the city of Athens and its demes dominate the discussion. Subsequent books describe Corinth (2nd book), Laconia (3rd), Messenia (4th), Elis (5th and 6th), Achaia (7th), Arcadia (8th), Boetia (9th), Phocis and Ozolian Locris (10th). He famously leaves out key portions of Greece such as Crete. The project is more than topographical; it is a cultural geography. Pausanias digresses from description of architectural and artistic objects to review the mythological and historical underpinnings of the society that produced them. As a Greek writing under the auspices of the Roman empire, he found himself in an awkward cultural space, between the glories of the Greek past he was so keen to describe and the realities of a Greece beholden to Rome as a dominating imperial force. His work bears the marks of his attempt to navigate that space and establish an identity for Roman Greece.

He is not a naturalist by any means, though he does from time to time comment on the physical realities of the Greek landscape. He notices the pine trees on the sandy coast of Elis, the deer and the wild boars in the oak woods of Phelloe, and the crows amid the giant oak trees of Alalcomenae. It is mainly in the last section that Pausanias touches on the products of nature, such as the wild strawberries of Helicon, the date palms of Aulis, and the olive oil of Tithorea, as well as the tortoises of Arcadia and the "white blackbirds" of Cyllene.

Pausanias is most at home in describing the religious art and architecture of Olympia and of Delphi. Yet, even in the most secluded regions of Greece, he is fascinated by all kinds of depictions of gods, holy relics, and many other sacred and mysterious objects. At Thebes he views the shields of those who died at the Battle of Leuctra, the ruins of the house of Pindar, and the statues of Hesiod, Arion, Thamyris, and Orpheus in the grove of the Muses on Helicon, as well as the portraits of Corinna at Tanagra and of Polybius in the cities of Arcadia.

Pausanias has the instincts of an antiquary. As his editor Christian Habicht has said,

In general he prefers the old to the new, the sacred to the profane; there is much more about classical than about contemporary Greek art, more about temples, altars and images of the gods, than about public buildings and statues of politicians. Some magnificent and dominating structures, such as the Stoa of King Attalus in the Athenian Agora (rebuilt by Homer Thompson) or the Exedra of Herodes Atticus at Olympia are not even mentioned.[6]

Pausanias' Periegesis, unlike a Baedeker guide, stops for a brief excursus on a point of ancient ritual or to tell an apposite myth, in a genre that would not become popular again until the early 19th century. In the topographical part of his work, Pausanias is fond of digressions on the wonders of nature, the signs that herald the approach of an earthquake, the phenomena of the tides, the ice-bound seas of the north, and the noonday sun which at the summer solstice casts no shadow at Syene (Aswan). While he never doubts the existence of the gods and heroes, he sometimes criticizes the myths and legends relating to them. His descriptions of monuments of art are plain and unadorned. They bear the impression of reality, and their accuracy is confirmed by the extant remains. He is perfectly frank in his confessions of ignorance. When he quotes a book at second hand he takes pains to say so.

The work left faint traces in the known Greek corpus. "It was not read," Habicht relates— "there is not a single mention of the author, not a single quotation from it, not a whisper before Stephanus Byzantius in the sixth century, and only two or three references to it throughout the Middle Ages."[7] We came perilously close to losing it altogether, in fact: the only manuscripts of Pausanias are three 15th-century copies, full of errors and lacunae, which all appear to depend on a single manuscript that survived to be copied. Niccolò Niccoli had this archetype in Florence in 1418; at his death in 1437 it went to the library of San Marco, Florence, then disappeared after 1500.[8] Until 20th century archaeologists found that Pausanias was a reliable guide to the sites they were excavating,[9] Pausanias was largely dismissed by 19th- and early 20th-century classicists of a purely literary bent, who followed the authoritative Wilamowitz in discrediting him, as a purveyor of literature quoted at second-hand, who, it was suggested, had not actually visited most of the places he described. Habicht 1985 describes an episode in which Wilamowitz was led astray by misreading Pausanias, in front of an august party of travellers, in 1873, and attributes to it Wilamowitz' lifelong antipathy and distrust of Pausanias. The experience of a century of archaeologists, however, has fully vindicated Pausanias.