Pavane by Keith Roberts is an alternative history science fiction fix-up novel first published by Rupert Hart-Davis Ltd in 1968. Most of the original stories were published in Science Fantasy. An additional story, "The White Boat", was added in later editions.

Comprising a cycle of linked stories set in Dorset, England, it depicts a 1968 in which the Roman Catholic Church still has supremacy; in its timeline, Protestantism was destroyed during wars that resulted from the aftermath of the assassination of Queen Elizabeth in 1588.

File:Corfecastlegate00297.jpg
Ruins of Corfe Castle, "slighted" as in the story 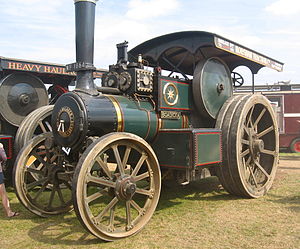 Traction engines feature importantly in the novel. A real one is shown here at the Great Dorset Steam Fair.

Without Protestant England, Spain prevented the Protestant Netherlands from attaining independence, while the German mercantile city states that financed the Reformation were also suppressed. As a consequence, while Spanish power eventually wanes, the Roman Catholic Church has no rivals and the Pope becomes the effective secular, as well as spiritual, ruler over Europe. The Church thus also controls the restive "New World" (which approximates the United States in our timeline), as well as "Australasia", where James Cook planted the cobalt flag of the Vatican, instead of the Union Flag, in the 18th century.

The social effects include a continuing feudal system and bans on innovation, particularly electricity, leading to a roughly mid-19th century technology with steam traction engines and mechanical semaphore telegraphy. Outlying areas are dangerous, with wild animals and occasional manifestations of the "Old Ones" or "People of the Hills" (supposed fairies) who leave crab-symbol graffiti. The stories take place at a period when the possibility of revolution is rumoured.

The location and flavour, nostalgic yet tragic in outlook, resemble a science-fictional equivalent of the fictionalized Wessex of Thomas Hardy (as in the Hardy stories, there are place-name differences; for instance, in Pavane Dorchester retains its Roman name, Durnovaria). Real geographical locations play a major role: Golden Cap is the site of a semaphore station, and the castle at Corfe is a key presence in the book.

Over all, the long arm of the Popes reached out to punish and reward; the Church Militant remained supreme. But by the middle of the twentieth century widespread mutterings were making themselves heard. Rebellion was once more in the air . . .

The title alludes to the stately and melancholy dance, the pavane, the book being divided thematically into measures and a coda. After a brief Prologue explaining the back-story, the stories are:

Pavane soon found an important place in the alternate history subgenre of science fiction and the work's high reputation continues, with the authoritative The Cambridge Companion to Science Fiction assessing it as "now credited as the finest of all 'alternate histories' ".[1][2] Algis Budrys found the novel to be "a tapestry of a book; a marvel of storytelling", and concluded that, despite an unnecessary Coda, it was "a truly wonderful work".[3]