From Infogalactic: the planetary knowledge core
Jump to: navigation, search
This article is about the structure. For other uses, see Pavilion (disambiguation). 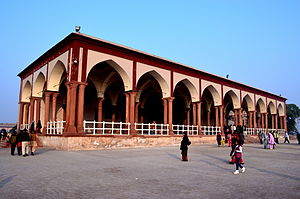 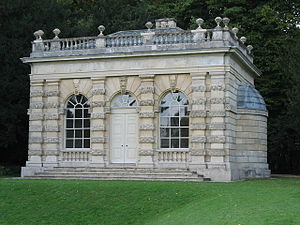 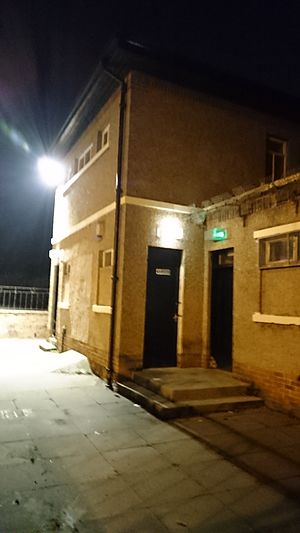 Woodfarm Pavilion, Glasgow. An example of a more common pavilion in an urban area. 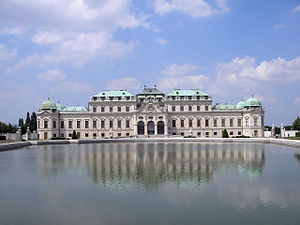 Pavilions at each end of the facade of the Upper Belvedere, Vienna

In architecture a pavilion (from French pavillon, from Latin papilio) has two primary meanings. It can refer to a free-standing structure sited a short distance from a main residence, or within a compound, typically whose architecture makes it an object of pleasure. Large or small, in the West there is usually a connection with relaxation and pleasure in its intended use.

In the traditional architecture of Asia, palaces or other large houses may partly consist of a collection of pavilions that are not connected, or only by thin arcades, as in the Forbidden City, Topkapi Palace in Istanbul, and in the Red Fort and other buildings of Mughal architecture.

In its other primary meaning, in a symmetrical range of buildings in the classical styles, where there is a main central block – the corps de logis – the wings may end in pavilions that are emphasized in some fashion, in order to provide a full stop to the composition, like a period at the end of a sentence.

Such pavilions may be small garden outbuildings, similar to a summer house or a kiosk; small rooms on the roof of a large house, reached only via the roof (rather than by internal stairs) may also be called pavilions. These were particularly popular up to the 18th century and can be equated to the Italian casina, formerly rendered in English "casino". These often resembled small classical temples and follies. Especially if there is some space for food preparation, they may be called a banqueting house. A pavilion built to take advantage of a view may be referred to as a gazebo. Bandstands in a park are a class of pavilion. A pool house by a swimming pool may have sufficient character and charm to be called a pavilion. By contrast, a free-standing pavilion can also be a far larger building such as the Royal Pavilion at Brighton, which is in fact a large oriental style palace; however, like its smaller namesakes, the common factor is that it was built for pleasure and relaxation.

A sports pavilion is usually a building adjacent to a sports ground used for changing clothes and often partaking of refreshments. Often it has a verandah to provide protection from the sun for spectators. In cricket grounds, as at Lords, pavilion tends to be used for the building the players emerge from and return to, even when this is actually a large building including a grandstand. The term pavilion can also be used in stadia, especially baseball parks, to distinguish a typically single-decked, covered seating area from the more expensive seating area of the main grandstand and the less expensive seating area of the uncovered bleachers.

Externally, pavilions may be emphasised by any combination of a change in height, profile (a flat facade may end in round pavilions, or flat ones that project out), colour, material, and ornament. Internally they may be part of a rectangular block, or only connected to the main block by a thin section of building. The two 18th-century English country houses of Houghton Hall and Holkham Hall, illustrate these different approaches in turn.

In the Place des Vosges, Paris (1605–12), twin pavilions mark the centers of the north and south sides of the square (illustration, lower). They are named the Pavillon du Roi and the Pavillon de la Reine though no royal personage ever lived in the square. With their triple archways, they function like gatehouses that give access to the privileged space of the square. French gatehouses had been built in the form of such pavilions in the preceding century.

In some areas, a pavilion is a term for a hunting lodge. The "Pavillon de Galon" in Luberon, France is a typical 18th century aristocratic hunting pavilion. The pavilion, located on the site of an old Roman villa, includes a garden "à la française," which was used by the guests for receptions.