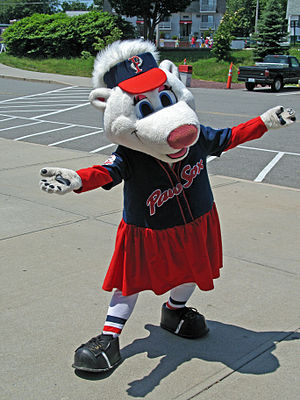 The Pawtucket Red Sox (known colloquially as the PawSox) are the minor league baseball Triple-A affiliate of the Boston Red Sox and play their games in the International League. The team plays their home games at McCoy Stadium in Pawtucket, Rhode Island. They are the only professional baseball team in Rhode Island. Their most recent championship win was in 2014.

On February 23, 2015, the team was sold by its longtime owners to a group headed by then-Boston Red Sox president and chief executive officer Larry Lucchino and Rhode Island attorney James J. Skeffington. The new owners announced their desire to relocate to a new stadium in downtown Providence, Rhode Island, by April 2017 in spite of significant opposition from fans.[1] Almost seven months later, state officials and PawSox ownership announced that the team's preferred site along the Providence River was not suitable for the new stadium.[2] In November 2015, the club committed to staying in Pawtucket through 2020,[3] although its long-term future in Rhode Island remained uncertain.[2]

The first team to be dubbed the Pawtucket Red Sox debuted at McCoy Stadium in 1970 as a member of the Double-A Eastern League. The franchise, owned by former Major League shortstop Joe Buzas, had spent the previous five seasons (1965–69) as the Pittsfield Red Sox after playing in four different Pennsylvania cities — Allentown, Johnstown, York and Reading — over seven years (1958–64).

After three seasons, Pawtucket's Eastern League franchise moved to Bristol, Connecticut, in 1973 to make room for the Triple-A PawSox. Carlton Fisk, the future Baseball Hall of Fame catcher, played for the Eastern League PawSox in 1970. Shortstop Rick Burleson and first baseman Cecil Cooper are among the players who toiled for both the Double-A and Triple-A versions of the team. This first edition of the PawSox franchise played for ten seasons as the Bristol Red Sox and then spent 33 seasons (1983–2015) in New Britain, Connecticut, the last 21 of them as the Rock Cats. In 2016, the Rock Cats are scheduled to move to Connecticut's capital city as the Hartford Yard Goats.

The Cleveland Indians had also placed an Eastern League club in Pawtucket, in 1966–67. The Pawtucket Indians moved to Waterbury, Connecticut, in 1968. The Pawtucket Slaters, a Boston Braves farm club in the Class B New England League, represented the city in the late 1940s.

Roots in Toronto and Louisville

The Triple-A team that is now the Pawtucket Red Sox began in 1896 as the Toronto Maple Leafs. After the American Association and its Louisville Colonels franchise folded in 1962 and the American League owners voted down Charlie O. Finley's agreement to move the Kansas City A's to Louisville in 1964, Louisville was ready for the return of baseball. In 1968 the Maple Leafs, the Red Sox' top minor league club since 1965, were bought by Walter J. Dilbeck and moved to Louisville where they became the new Louisville Colonels and retained their affiliation with the Red Sox. They played at Fairgrounds Stadium on the Kentucky State Fairgrounds. While in Louisville, star players included Carlton Fisk (1971), Dwight Evans (1972), and Cecil Cooper (1972). The Louisville Colonels made the International League playoffs in 1969 and 1972.

However, in 1972, the Kentucky State Fair Board remodeled Cardinal Stadium so it could accommodate football. The renovations made the stadium unsuitable for baseball; among other things, it was far too large for a Triple-A team. However, the stadium was later used by the latter-day Louisville Redbirds club, setting minor league attendance records and outdrawing several major league teams. Following the 1972 season, the Louisville Colonels moved to Pawtucket and became the Pawtucket Red Sox. The team was a success on the field, led by future major leaguers Cecil Cooper and Dick Pole, winning the 1973 Governors' Cup Championship in their inaugural year in the league over the Charleston Charlies which they followed up by defeating the Tulsa Oilers of the American Association to win the Junior World Series. The following season the team finished 30 games below .500 and in 1975, while the parent club was on their way to the World Series, the PawSox finished with 53–87. The team changed its name to the Rhode Island Red Sox for the 1976 season, but little changed on the field with a third straight sub-.500 season. After the season, the franchise went bankrupt, unable to pay off $2 million worth of debt.

Although it appeared the Red Sox's stay in the Pawtucket area was about to come to an end, retired businessman Ben Mondor stepped in and made sure the team remained in the city. Mondor was granted a brand-new franchise and restored the name to the Pawtucket Red Sox. However, it retained the old team's history and affiliation with the big-league Red Sox. Nonetheless, it was really in 1977 that the current Pawtucket Red Sox, and PawSox, were born.

Mondor's tenure began inauspiciously. While the PawSox rebounded to win the Governors' Cup, they only drew 1,000 fans per game—believed to be the fewest for a league champion in the history of the International League. After several years of playing in a stadium that was barely suitable for a Triple-A team, in 1998 Mondor and team president Mike Tamburro oversaw the transformation of McCoy Stadium from an aging 1942 relic into its renovated form. While they kept the price of tickets at $6 and $10,[4] parking is free. The PawSox usually lead the league in attendance. In 1999, they drew 9,000 fans per game, and in 2005 set a franchise record with 688,421 tickets sold during the year. Kevin Youkilis played for the team in 2003, and completed a streak he started while in Portland: he reached base in 71 consecutive games, tying future teammate Kevin Millar's minor-league records for consecutive games reaching base.

In addition to their success at the box office, the PawSox have excelled in the field. In 2000, Pawtucket set an all-time franchise record for victories with 82, as the team completed their fifth-straight winning season. Three years later the PawSox would top their own record by winning 83 games. In 2008, they won 85 games. The 1984 team defeated the now-defunct Maine Guides 3–2 to win the 1984 Governors' Cup trophy for their second championship in Pawtucket Red Sox history. In 2012, the PawSox defeated the Charlotte Knights to win the Governors' Cup for a third time. A fourth title was won in 2014 when the PawSox took down the Durham Bulls in five games.

The origins of PawSox are traced back to the first season in which Mondor owned the club. Three weeks before the 1977 season began the team lacked uniforms. BoSox vice president Haywood Sullivan stepped in and sent Pawtucket 48 sets of old home and away uniforms from the parent club. Although the home uniforms were fine for the team to use, the road uniforms had "Boston" stitched across the chest, which was a problem. Tamburro suggested using the name "PawSox" across the front, with each unstitched "Boston" letter replaced with one that spelled "PawSox". Thus, the PawSox name was born out of the necessity of a uniform crisis.

Sale and proposed move to Providence (2015)

On November 29, 2014, it was reported that members of the Boston Red Sox' ownership group were in the process of purchasing the PawSox from Madeleine Mondor and two long-time executives who also held stock in the team: president Tamburro and vice president and general manager Lou Schwechheimer.[6]

Nearly three months later, on February 23, the sale to Lucchino, Skeffington and their partners was formally announced. Lucchino added the title of chairman of the PawSox to his Boston responsibilities (from which he announced his retirement on August 1, 2015), and Skeffington became club president. Other partners included Rhode Island businessmen Bernard Cammarata, William P. Egan, Habib Gorgi, J. Terrence Murray and Thomas M. Ryan, as well as Fenway Sports Management (a division of the BoSox' parent company, Fenway Sports Group), and two limited partners in the Boston club and FSG, Arthur E. Nicholas and Frank M. Resnek.[7]

That day, the new owners also announced their intention to move the club out of McCoy Stadium and build a new baseball park six miles (9.65 km) to the south in downtown Providence, and begin play there as early as 2017.[8] Skeffington said the club would be renamed the Rhode Island Red Sox upon the move.[8] That name was previously used by the 1976 edition of the PawSox, before Mondor purchased the team and restored its Pawtucket identity. In the weeks following announcement of the sale, Skeffington led a media tour of the proposed new stadium site on public and private land along the Providence River and, with Lucchino, served as a point person in negotiations with state and local officials over public financing arrangements for the new park.[9][10]

However, Skeffington, 73, died from an apparent heart attack while jogging near his Barrington home on May 17, 2015,[11] delaying the team's efforts to secure an agreement with Rhode Island officials.[12] In September, governor Gina Raimondo told Lucchino that the riverfront parcel, consisting of public land formerly occupied by Interstate 195 and private property owned by Brown University, "was not suitable and there were too many obstacles that remained."[2] In the wake of the setback, Lucchino said that the team preferred to remain in Rhode Island, but neither he nor other PawSox officials immediately commented about possible alternative locations. In the ensuing weeks, reports surfaced that the Massachusetts cities of Worcester, Springfield and Fall River might bid for the team.[13]

On November 5, Skeffington's position was filled when Dr. Charles Steinberg, longtime Lucchino aide and public affairs and PR executive with four big-league teams, including Boston, became club president. Tamburro remained on board as vice chairman, and Dan Rea III became the PawSox' new general manager, after Schwechheimer departed to join an ownership group that purchased the Triple-A New Orleans Zephyrs.[14] Amidst the uncertainty over its longterm home, Steinberg committed the team to remaining in Pawtucket for five seasons, through 2020, and to rebuilding its relationship with its fans.[3]

The PawSox played in and won the longest game in professional baseball history, a 33-inning affair against the Rochester Red Wings at McCoy Stadium. The game started on April 18, 1981. Play was suspended at 4:07 a.m. at the end of the 32nd inning. The game did not resume again until June 23 when the Red Wings returned to Pawtucket. Only one inning was needed, with the PawSox winning 3–2 in the bottom of the 33rd when first baseman Dave Koza drove in second baseman Marty Barrett with a bases-loaded single off Cliff Speck. Major League Baseball Hall of Famers Cal Ripken, Jr. and Wade Boggs played in the game.

On June 23, 2006, the PawSox celebrated the 25th anniversary of "The Longest Game" with events and festivities when they played the Columbus Clippers. 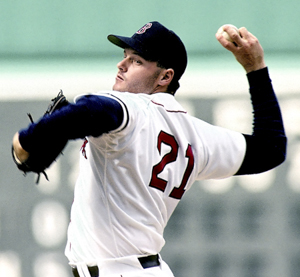 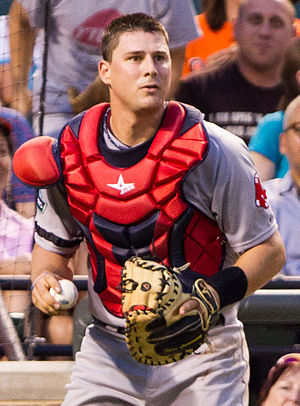 In addition, Dan Hoard is now the broadcaster for the NFL's Cincinnati Bengals. He was with the PawSox from 2006–2011. On April 24, 2013, it was announced that current broadcaster Bob Socci would become the New England Patriots play-by-play broadcaster starting with the 2013 season.[15]

The announcers for the Pawsox Radio Network are Josh Maurer and Will Flemming.[16]