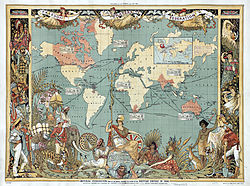 An elaborate map of the British Empire in 1886, marked in the traditional colour for imperial British dominions on maps

Pax Britannica (Latin for "British Peace", modelled after Pax Romana) was the period of relative peace in Europe and the world (1815–1914) during which the British Empire became the global hegemonic power and adopted the role of a global police force.[1][2]

Between 1815 and 1914, a period referred to as Britain's "imperial century,"[3][4] around 10,000,000 square miles (26,000,000 km2) of territory and roughly 400 million people were added to the British Empire.[5] Victory over Napoleonic France left the British without any serious international rival, other than perhaps Russia in central Asia.[6] When Russia acted aggressively in the 1850s, the British and French defeated it in the Crimean War (1854–56), thereby protecting the by then feeble Ottoman Empire.

Britain's Royal Navy controlled most of the key maritime trade routes and enjoyed unchallenged sea power. Alongside the formal control it exerted over its own colonies, Britain's dominant position in world trade meant that it effectively controlled access to many regions, such as Asia and Latin America. British merchants, shippers and bankers had such an overwhelming advantage over everyone else that in addition to its colonies it had an "informal empire".[7][8][9]

After losing the American colonies in the American Revolution, Britain turned towards Asia, the Pacific and later Africa with subsequent exploration leading to the rise of the Second British Empire (1783–1815). The industrial revolution began in Great Britain in the late 1700s and new ideas emerged about free markets, such as Adam Smith's The Wealth of Nations (1776). Free trade became a central principle that Britain practiced by the 1840s. It played a key role in Britain's economic growth and financial dominance.[10]

From the end of the Napoleonic Wars in 1815 until World War I in 1914, the United Kingdom played the role of global hegemon (most powerful actor). Imposition of a "British Peace" on key maritime trade routes began in 1815 with the annexation of British Ceylon (now Sri Lanka).[11] Under the British Residency of the Persian Gulf, local Arab rulers agreed to a number of treaties that formalised Britain’s protection of the region. Britain imposed an anti-piracy treaty, known as the General Treaty of 1820, on all Arab rulers in the region. By signing the Perpetual Maritime Truce of 1853, Arab rulers gave up their right to wage war at sea in return for British protection against external threats.[12] The global superiority of British military and commerce was aided by a divided and relatively weak continental Europe, and the presence of the Royal Navy on all of the world's oceans and seas. Even outside its formal empire, Britain controlled trade with many countries such as China, Siam, and Argentina. Following the Congress of Vienna the British Empire's economic strength continued to develop through naval dominance[13] and diplomatic efforts to maintain a balance of power in continental Europe.[14]

In this era, the Royal Navy provided services around the world that benefited other nations, such as the suppression of piracy and blocking the slave trade. The Slave Trade Act 1807 had banned the trade across the British Empire, after which the Royal Navy established the West Africa Squadron and the government negotiated international treaties under which they could enforce the ban.[15][16] Sea power, however, did not project on land. Land wars fought between the major powers include the Crimean War, the Franco-Austrian War, the Austro-Prussian War and the Franco-Prussian War, as well as numerous conflicts between lesser powers. The Royal Navy prosecuted the First Opium War (1839–1842) and Second Opium War (1856–1860) against Imperial China. The Royal Navy was superior to any other two navies in the world, combined. Only Germany was a potential naval threat.

Britain traded goods and capital extensively with countries around the world, adopting a free trade policy after 1840. The growth of British imperial strength was further underpinned by the steamship and the telegraph, new technologies invented in the second half of the 19th century, allowing it to control and defend the empire. By 1902, the British Empire was linked together by a network of telegraph cables, the so-called All Red Line.[17]

The Pax Britannica was weakened by the breakdown of the continental order which had been established by the Congress of Vienna.[18] Relations between the Great Powers of Europe were strained to breaking point by issues such as the decline of the Ottoman Empire, which led to the Crimean War, and later the emergence of new nation states in the form of Italy and Germany after the Franco-Prussian War. Both of these two wars involved Europe's largest states and armies. The industrialisation of Germany, the Empire of Japan, and the United States of America contributed to the relative decline of British industrial supremacy in the early 20th century.