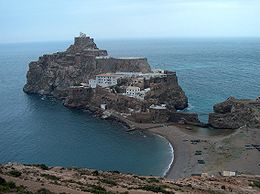 Peñón de Vélez de la Gomera is located 119 km southeast of Ceuta. It was a natural island in the Alboran Sea until 1934, when a huge thunderstorm washed large quantities of sand in the short channel between the island and the African continent, turning it into a tombolo.[1] Ever since, it has been a peninsula, currently connected to the Moroccan coast by an 85 m long sandy isthmus, the world's shortest land border. With a length of 400 meters northwest-southeast and a width of up to 100 meters, it covers about 19,000 m² or 1.9 ha. 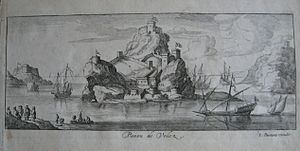 Portugal and Spain passed an agreement in 1496 in which they effectively established their zones of influence on the North African coast: Spain could only occupy territory east of Peñón de Vélez. This restriction would only end with the absorption of Portugal into the Spanish crown of Philip II after the 1578 Battle of Ksar El Kebir, when Spain started to take direct actions in Morocco, as in the occupation of Larache.[2]

In 1508, Spain launched an expedition under the command of Pedro Navarro to fight against the pirates who populated it, and who were constantly attacking and looting the coast of Southern Spain. Spain captured the Peñón.

In 1522, Spain lost the peñón after a successful Moroccan Berber attack, in which the whole Spanish garrison was killed. Ali Abu Hassun, new ruler of the Kingdom of Fez in 1554, then gave the peñón to Ottoman troops that had assisted him in gaining the throne.[3]

In 1564, after a failed attempt in 1563, the Spaniards under command of García Álvarez de Toledo, 4th Marquis of Villafranca took the place from a garrison of 150 Ottoman soldiers, who were all killed.[citation needed] Mathurin Romegas took part in the capture, and Brantôme was another witness to the event. The Spanish have retained control of it ever since, despite having been besieged in 1680, 1701, 1755, 1781 and 1790.

In 1871, the Spanish Congress debated abandoning the peñón, since by that time it had lost its military interest, but in the end the proposal was dropped.

On the morning of 29 August 2012 there was an incident in which seven Moroccan activists of the Committee for the Liberation of Ceuta and Melilla stormed the rock and placed flags of Morocco, resulting in the arrest of four of them by Spanish soldiers. Among the instigators of the assault was Yahya Yahya, mayor of the Moroccan town of Beni Ansar. Three Moroccans managed to escape from Spanish territory and could not be captured.[4]

The territory is reached mostly by helicopter with helipad located on the upper sections. A landing area is located on the south end near the land entrance to Peñón de Vélez de la Gomera.