Peace for our time

From Infogalactic: the planetary knowledge core
Jump to: navigation, search
For other uses, see Peace in Our Time. 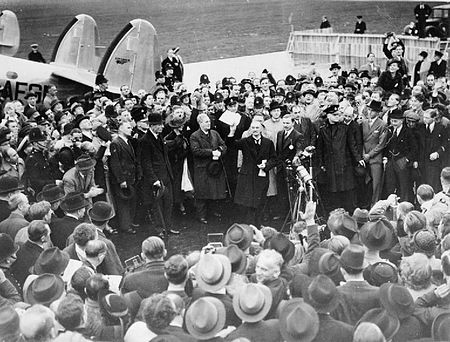 Neville Chamberlain showing the Anglo-German Declaration to a crowd at Heston Aerodrome in front of G-AFGN, a British Airways Lockheed 14, on 30 September 1938

"Peace for our time" is a phrase, spoken on 30 September 1938 by British Prime Minister Neville Chamberlain in his speech concerning the Munich Agreement and the Anglo-German Declaration.[1] The phrase echoed Benjamin Disraeli, who, upon returning from the Congress of Berlin in 1878, stated, "I have returned from Germany with peace for our time". It is primarily remembered for its ironic value: less than a year after the agreement, Hitler's continued aggression and his invasion of Poland was followed by declarations of war on Germany by France and the United Kingdom.

It is often misquoted as "peace in our time", which had appeared long before in The Book of Common Prayer as "Give peace in our time, O Lord", probably based on the 7th-century hymn "Da pacem Domine! in diebus nostris, Alleluja".[2] It is unknown how deliberate Chamberlain's use of such a similar term was; however, anyone of his background would have been familiar with the original.

Chamberlain landed at Heston Aerodrome on 30 September 1938, and spoke to the crowds there:

The settlement of the Czechoslovakian problem, which has now been achieved is, in my view, only the prelude to a larger settlement in which all Europe may find peace. This morning I had another talk with the German Chancellor, Herr Hitler, and here is the paper which bears his name upon it as well as mine. Some of you, perhaps, have already heard what it contains but I would just like to read it to you: ' ... We regard the agreement signed last night and the Anglo-German Naval Agreement as symbolic of the desire of our two peoples never to go to war with one another again.'[3]

Later that day he stood outside 10 Downing Street and again read from the document and concluded:

My good friends, for the second time in our history, a British Prime Minister has returned from Germany bringing peace with honour. I believe it is peace for our time. We thank you from the bottom of our hearts. Go home and get a nice quiet sleep.[3]

Peace In Our Time is the title of a 1947 stage play by Noël Coward. Set in an alternative 1940, the Battle of Britain has been lost, the Germans have supremacy in the air and the British Isles are under Nazi occupation. Inspired to write this play in 1946 after seeing the effects of the occupation of France, the famously patriotic Coward wrote: "I began to suspect the physical effect of four years' intermittent bombing is far less damaging to the intrinsic character of a nation than the spiritual effect of four years of enemy occupation".

U.S. President John F. Kennedy alluded to the speech in his 1963 American University Commencement Address in which he sought "not merely peace in our time, but peace in all time."[4] Kennedy had written his college thesis on Chamberlain's appeasement policy,[5] which his father supported.[6] As president, Kennedy struggled to distance himself from his father's image as an appeaser.[7]

US President Barack Obama also used the phrase "peace in our time" in his 2013 inaugural address.[8]