The Peace of Augsburg, also called the Augsburg Settlement,[1] was a treaty between Charles V and the forces of the Schmalkaldic League, an alliance of Lutheran princes, on September 25, 1555, at the imperial city of Augsburg, now in present-day Bavaria, Germany. It officially ended the religious struggle between the two groups and made the legal division of Christendom permanent within the Holy Roman Empire.

The Peace established the principle Cuius regio, eius religio, which allowed Holy Roman Empire's states' princes to select either Lutheranism or Catholicism within the domains they controlled, ultimately reaffirming the independence they had over their states. Subjects, citizens, or residents who did not wish to conform to the prince's choice were given a period in which they were free to emigrate to different regions in which their desired religion had been accepted.

Charles V had made a provisional ruling on the religious question, the Augsburg Interim of 1548; this offered a temporary ruling on the legitimacy of two religious creeds in the empire, and codified by law in 30 June 1548 upon the insistence of Charles V, who wanted to work out religious differences under the auspices of a general council of the Catholic Church. The Interim reflected largely Catholic principles of religious behavior in its 26 articles, but it did allow for marriage of the clergy, and the giving of both bread and wine to the laity. This led to resistance by the Protestant territories, who proclaimed their own Interim at Leipzig the following year.[2]

The Interim was overthrown in 1552 by the revolt of the Protestant elector Maurice of Saxony and his allies. In the negotiations at Passau in the summer of 1552, even the Catholic princes had called for a lasting peace, fearing the religious controversy would never be settled. The emperor, however, was unwilling to recognize the religious division in Western Christendom as permanent. This document was foreshadowed by the Peace of Passau, which in 1552 gave Lutherans religious freedom after a victory by Protestant armies. Under the Passau document, Charles granted a peace only until the next imperial Diet. The meeting was called in early 1555.

The treaty, negotiated on Charles' behalf by his brother Ferdinand, effectively gave Lutheranism official status within the domains of the Holy Roman Empire. According to the policy of cuius regio, eius religio ("who rules, his religion", or "in the Prince's land, the Prince's religion"), the religion (Roman Catholic or Lutheran) of a region's ruler determined the religion of its people. During a grace period, families could choose to move to a region where their faith was practiced. (Article 24: "In case our subjects, whether belonging to the old religion or the Augsburg Confession, should intend leaving their homes with their wives and children in order to settle in another, they shall be hindered neither in the sale of their estates after due payment of the local taxes nor injured in their honour.") Knights and towns who had practiced Lutheranism for some time were exempted under the Declaratio Ferdinandei, but the Ecclesiastical reservation supposedly prevented the principle of cuius regio, eius religio from being applied if an ecclesiastical ruler converted to Lutheranism.

The third principle exempted knights and some of the cities under the jurisdiction of an ecclesiastical prince if they had practiced Lutheranism for some time (Lutheranism was the only branch of Protestantism recognized under the Peace). The provision was not publicized as part of the treaty, and was kept secret for almost two decades.[7] 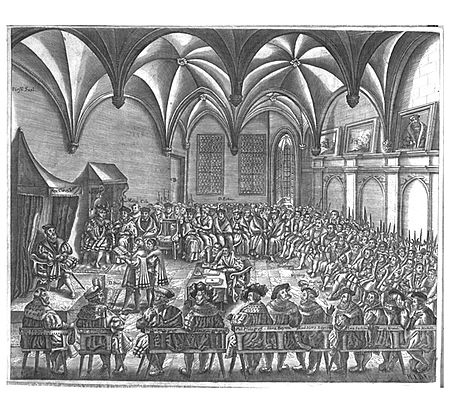 Representatives of the German estates at the Augsburg conference discuss the possibilities of a religious peace.

The document itself had critical problems. While it gave legal basis for the practice of the Lutheran confession, it did not accept any of the Reformed traditions, such as Calvinism, or for Anabaptism. Although the Peace of Augsburg was moderately successful in relieving tension in the empire and increasing tolerance, it left important things undone. Neither the Anabaptists nor the Calvinists were protected under the peace, so many Protestant groups living under the rule of a Lutheran prince still found themselves in danger of the charge of heresy. (Article 17: "However, all such as do not belong to the two above named religions shall not be included in the present peace but be totally excluded from it.") These minorities did not achieve any legal recognition until the Peace of Westphalia in 1648. The intolerance towards Calvinists caused them to take desperate measures that led to the Thirty Years' War. One of the more notable measures was the Second Defenestration of Prague (1618) in which two representatives of the fiercely Catholic Holy Roman Emperor Ferdinand II were thrown out of a castle window in Prague.

The principle of ecclesiastical reservation was tested in the Cologne War (1583-1588), which grew out of the scenario envisioned by Ferdinand when he wrote the proviso: the reigning Prince-Bishop converted to Protestantism; although he did not insist that the population convert, he placed Calvinism on a parity with Catholicism throughout the Electorate of Cologne. This in itself created a two-fold legal problem: first, Calvinism was considered a heresy; second, the Elector did not resign his see, which made him eligible, at least in theory, to cast a ballot for emperor. Finally, his marriage posed a very real potential to convert the Electorate into a dynastic principality, shifting the balance of religious power in the Empire.

A side effect of the religious turmoil was Charles' decision to abdicate and divide Habsburg territory into two sections. His brother Ferdinand ruled the Austrian lands, and Charles' fervently Catholic son, Philip II, became administrator of Spain, the Spanish Netherlands, parts of Italy, and other overseas holdings. Philip was responsible for initiating protracted wars with England and the Dutch, which ultimately crippled Spain and gave the Protestant movement new life.