From Infogalactic: the planetary knowledge core
(Redirected from Peace of Cateau-Cambrésis)
Jump to: navigation, search

The Italian War of 1551 (1551–1559), sometimes known as the Habsburg–Valois War and the Last Italian War, began when Henry II of France, who had succeeded Francis I to the throne, declared war against Charles I of Spain with the intent of recapturing Italy and ensuring French, rather than Habsburg, domination of European affairs.

Henry II sealed a treaty with Suleiman the Magnificent in order to cooperate against the Habsburgs in the Mediterranean.[1] This was triggered by the conquest of Mahdiya by the Genoese Admiral Andrea Doria on 8 September 1550, for the account of Charles V. The alliance allowed Henry II to push for French conquests towards the Rhine, while a Franco-Ottoman fleet defended southern France.[2]

The 1551 Ottoman Siege of Tripoli was the first step of the all-out Italian War of 1551–59 in the European theater, and in the Mediterranean the French galleys of Marseille were ordered to join the Ottoman fleet.[3] In 1552, when Henry II attacked Charles V, the Ottomans sent 100 galleys to the Western Mediterranean,[4] which were accompanied by three French galleys under Gabriel de Luetz d'Aramon in their raids along the coast of Calabria in Southern Italy, capturing the city of Reggio.[5] In the Battle of Ponza in front of the island of Ponza, the fleet met with 40 galleys of Andrea Doria, and managed to vanquish the Genoese and capture seven galleys. This alliance would also lead to the combined Invasion of Corsica in 1553. The Ottomans continued harassing the Habsburg with various operations in the Mediterranean, such as the Ottoman invasion of the Balearic islands in 1558, following a request by Henry II.[6] 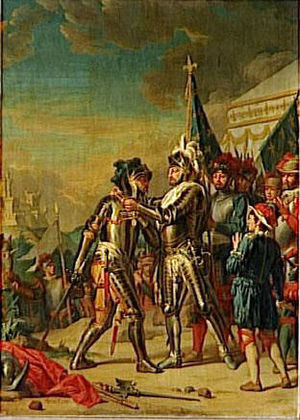 Henry II remitting the Order of Saint-Michel to Marshall de Tavannes after the Battle of Renty, on 13 August 1554.

On the Continental front, Henry II allied with German Protestant princes at the Treaty of Chambord in 1552. An early offensive into Lorraine was successful, with Henry capturing the three episcopal cities of Metz, Toul, and Verdun, and securing them by defeating the invading Habsburg army at the Battle of Renty in 1554. However, the French invasion of Tuscany in 1553, in support of Siena attacked by an imperial‐Tuscany army, was defeated at the Battle of Marciano by Gian Giacomo Medici in 1554. Siena fell in 1555 and eventually became part of the Grand Duchy of Tuscany founded by Cosimo I de' Medici.

File:Scannagallo Vasari.jpg
The Battle of Scannagallo (Battle of Marciano) by Giorgio Vasari, in the Palazzo Vecchio of Florence.

The Treaty of Vaucelles was signed on 5 February 1556 between Philip II of Spain and Henry II of France. Based on the terms of the treaty, the territory of the Franche-Comté was relinquished to Philip. However, the treaty was broken shortly afterwards.

After Charles' abdication in 1556 split the Habsburg empire between Philip II of Spain and Ferdinand I, the focus of the war shifted to Flanders, where Philip, in conjunction with Emmanuel Philibert of Savoy, defeated the French at St. Quentin. England's entry into the war later that year led to the French capture of Calais, and French armies plundered Spanish possessions in the Low Countries. Nonetheless, Henry was forced to accept a peace agreement in which he renounced any further claims to Italy.

The wars ended for other reasons, including the Double Default of 1557, when the Spanish Crown, followed quickly by the French, defaulted on their debts. In addition, France had to confront Protestantism at home, which it hoped to crush.[7] 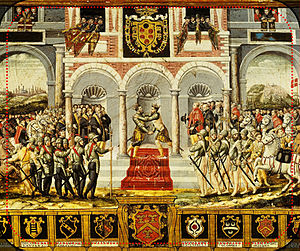 The Peace of Cateau-Cambresis (1559). Henry II of France and Philip II of Spain were in reality absent, and the peace was signed by their ambassadors. 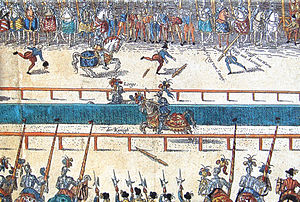 The fatal tournament between Henry II and Montgomery (Lord of "Lorges").

The Peace of Cateau-Cambrésis was signed between Henry II of France and Philip II of Spain on 3 April 1559, at Le Cateau-Cambrésis, around twenty kilometers south-east of Cambrai.[8] Under its terms, France restored Piedmont and Savoy to the Duke of Savoy, and Corsica to the Republic of Genoa, but retained Saluzzo, Calais and the Three Bishoprics: Metz, Toul, and Verdun.[9] Spain retained Franche-Comté, but, more importantly, the treaty confirmed its direct control of Milan, Naples, Sicily, Sardinia, and the State of Presidi, and indirectly (through dominance of the rulers of Tuscany, Genoa, and other minor states) of northern Italy. The Pope was also their natural ally. The only truly independent entities on Italian soil were Savoy and the Republic of Venice. Spanish control of Italy lasted until the early eighteenth century. Ultimately, the treaty ended the 60 year, Habsburg-Valois wars.

Emmanuel Philibert, Duke of Savoy married Margaret of France, Duchess of Berry, the sister of Henry II of France. Philip II of Spain married Elisabeth, the daughter of Henry II of France.[10] Henry died during a tournament when a sliver from the shattered lance of Gabriel Montgomery, captain of the Scottish Guard at the French Court, pierced his eye and entered his brain.

The French had achieved mixed results: their situation had improved significantly when compared to the late 1520s, they had made some territorial gains and the treaty was considered an agreement between two equal powers. However, they had failed to change the balance of power in Italy, or break the Habsburg encirclement. Most importantly, their good position would soon be jeopardized by the French Wars of Religion. For the Habsburgs as a whole, the result was mixed too, as the war had weakened their position in the Holy Roman Empire and led to the separation of Charles' realms. However, for the Kingdom of Spain, the results were much better, as it was left as the sole dominant power in Italy and had successfully withstood the French effort. England fared poorly during the war, and the loss of its last stronghold on the continent damaged its reputation.