From Infogalactic: the planetary knowledge core
Jump to: navigation, search
For the settlement ending the Austro-Prussian War, see Peace of Prague (1866).

The Peace of Prague of 30 May 1635 was a treaty between the Habsburg Emperor Ferdinand II and the Electorate of Saxony representing most of the Protestant states of the Holy Roman Empire. It effectively brought to an end the civil war aspect of the Thirty Years' War; however, the combat actions still carried on due to the continued intervention on German soil by Spain, Sweden, and, from mid-1635, France, until the Peace of Westphalia was concluded in 1648.

Negotiations towards the agreement had been instigated by the Elector John George I of Saxony, who whilst being a Lutheran prince had nonetheless initially supported the Emperor against the revolting Bohemian estates and had remained neutral during the Swedish intervention in 1630. However, after continued plundering of the Saxon lands by the troops of the Catholic League, he had joined the forces of King Gustavus Adolphus at the 1631 Battle of Breitenfeld. Gustavus Adolphus' death at the Battle of Lützen in 1632 and the Protestant defeat at the 1634 Battle of Nördlingen prompted the elector to again switch sides.

Years of fighting, an inability to reimpose the Catholic confession by force, the assassination of Generalissimo Albrecht von Wallenstein, and the need to put an end to the intervention of foreign powers in German affairs all combined to bring Ferdinand II to the table with a degree of willingness to make concessions towards the Lutheran estates.

As well as bringing to an end the fighting between the various states, the treaty also brought to an end religion as a source of national conflict; the principle of cuius regio, eius religio was established for good within the Empire. In return for making concessions in this area, Ferdinand II gained the alliance of the Lutheran princes both in the struggle against the Swedish intervention, and against the expected intervention of France. However, the intended restoration of the Imperial authority ultimatively failed as Emperor Ferdinand III had to acquiesce in a much larger enfeeblement to reach a final peace in 1648. 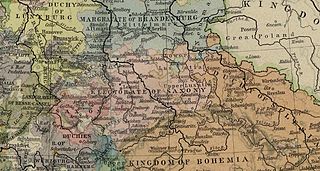 Saxony with Lower and Upper Lusatia, 1648

Ferdinand was also forced to make individual concessions to some of the major states to get them to sign the treaty: Saxony was granted the Bohemian crown lands of Lower and Upper Lusatia by Ferdinand II in his capacity as King of Bohemia. The Margraviate of Brandenburg, since 1618 part of the personal union of Brandenburg-Prussia, had its claim to the Farther Pomeranian possessions of the last Duke Bogislaw XIV confirmed. Even the Catholic Electorate of Bavaria, which had supported the Emperor throughout the war, extracted some minor concessions.