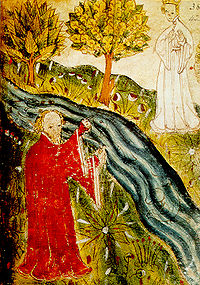 The "Pearl Poet", or the "Gawain Poet", is the name given to the author of Pearl, an alliterative poem written in 14th-century Middle English. Its author appears also to have written the poems Sir Gawain and the Green Knight, Patience, and Cleanness; some scholars suggest the author may also have composed Saint Erkenwald. Save for the last (found in BL-MS Harley 2250), all these works are known from a single surviving manuscript, the British Library holding Cotton Nero A.x. This body of work includes some of the greatest poetry written in Middle English.

The Pearl Poet remains unidentified. Some scholarship has argued to assign the poem to one John Massey, a member of the landed gentry from Cheshire. This attribution of the poems of Cotton Nero A.x is not widely accepted, however, reflected in the ongoing use of the labels "Pearl Poet" or "Gawain Poet."

The language of the poems shows that the poet was a contemporary of Geoffrey Chaucer, John Gower, and William Langland, who are sometimes (following the suggestion of academic John Burrow) collectively called the Ricardian Poets in reference to the reign of Richard II of England.[1] All four poems of the Cotton Nero A.x manuscript are in the same Middle English dialect, localised to the area of north-western Staffordshire and south-eastern Cheshire, in the English midlands. This may merely indicate the dialect of the scribe responsible for copying the poems, but there is good evidence that the dialect of poet and scribe were very similar.[2] It is, therefore, thought most likely that the poet was a native of east Cheshire or west Staffordshire and was writing in the latter part of the 14th century, and internal evidence indicates that all four works were probably written by the same author. However, there is not even unanimous agreement on the gender of the author, with features in the language and tone suggesting a possible female writer for Pearl that are absent from Sir Gawain and the Green Knight, largely agreed to be the work of a male figure. 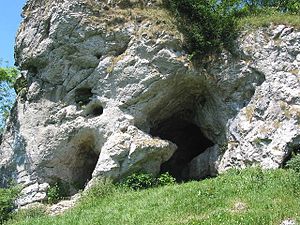 The caves at Wetton Mill, near Leek, Staffordshire, have been identified as a likely inspiration for the "Green Chapel" in Gawain and the Green Knight, given the author's dialect and the geography indicated in the poem.[3]

Any other information must be deduced from the poems' themes, as there is neither a definite authorial attribution within them nor any 'tradition' as to the author's identity (as with Langland and Piers Plowman). The poet would seem to be exceptionally conversant with learning, shows a deep knowledge of technical vocabulary about hunting and the court, vividly describes the landscape of the region, and has an interest in poverty as a Christian virtue. However, the writer of the Cotton Nero A.x poems never refers to contemporary scholarship as Chaucer, for example, does; the poems show much more of a tendency to refer to materials from the past (the Arthurian legends, stories from the Bible) than any new learning, so it is perhaps less possible to associate the poet with the universities, monasteries, or the court in London. Despite this, the Pearl Poet must have been educated and probably of a certain social standing, perhaps a member of a family of landed gentry. J. R. R. Tolkien and E.V. Gordon, after reviewing the allusions, style, and themes of Gawain and the Green Knight, concluded in 1925:

He was a man of serious and devout mind, though not without humour; he had an interest in theology, and some knowledge of it, though an amateur knowledge perhaps, rather than a professional; he had Latin and French and was well enough read in French books, both romantic and instructive; but his home was in the West Midlands of England; so much his language shows, and his metre, and his scenery.[4]

The Pearl Poet began writing during a time that newly emerging English literature and language was beginning to take hold. This new literature drew upon three older traditions which were Anglo-Saxon, Celtic, and continental (or French and Latin). The poet's writing was also influenced by contemporary political and social surroundings during the 14th century. The beginning of urban culture, the movement toward a more anglicised ruling class and political identity, and the radical changes in the English language, primarily wrought by its prolonged exposure to dialects of the French, can all be categorised under the social surroundings during this time.[5]

Because the Pearl Poet's language within the works is not the same as any spoken dialect, but is instead a poetic language containing many borrowings from more northern dialects like Old Norse and dialects from the French (especially Anglo-Norman), it may be suggested that the poet was cultured and well read. It may be assumed that because of the way the Pearl Poet wrote, the intended audience would have been people of elegant taste, familiar with the highly regulated and stylised Norman pursuits of heraldry and hunting, and could also concern themselves with serious moral and religious issues.[5]

The Pearl Poet's craft in versification and language, many features of which are necessarily lost or obscured in translation into Modern English, is a sign of sophistication and awareness of the latest literary trends. Enough features survive, however, that even those people unable to read the poems in the original translation are able to profit from the knowledge of the verse forms and techniques of language play.[5]

In Latin, Purity, Patience, and Pearl show the Pearl Poet's knowledge of the Vulgate Bible. In Pearl, the poet shows clear knowledge of not only the Apocalypse of St. John, but also many other parts of the Bible. It is possible that the poet consulted Latin commentaries on the Apocalypse and Genesis. The work makes use of major traditional elements in the Bible, such as treating Jonah's descent into the whale as a form of Christ's descent into Hell, and using Abraham's three angels as a type of the Trinity. What most interested the poet, however, was the literal sense of Biblical sources as opposed to their typological or allegorical significance.[6]

Pearl also shows the poet's understanding of mystical theology. It is pointed out that the Dreamer's definition of his vision as a 'gostly drem' (Line 790) indicates the poet's familiarity with the classification of visions used by mystical theologians and the mystics themselves. There is no need to suggest any extraordinary learning on the poet's part; most of the devotional writings were widely and easily understood.[6]

It is difficult to find evidence that the poet shared knowledge of classical poets, such as Virgil and Ovid, with the likes of Chaucer. However, there have been claims that certain small debts can be detected in Sir Gawain and the Green Knight to Virgil and to Seneca the Younger, and it is highly likely that the poet was familiar with a wide range of Latin literature that was current among the educated class in the Middle Ages.[6]

The chronology of the "alliterative revival" in which these works are a significant part of cannot be established with any precision. It is assumed that the revival began in the south-west midlands and fully flowered in the late fourteenth century. While Cheshire monasteries were not as well endowed as those in the south-west midlands, they would have included the main Latin works used as sources by the alliterative poets. Dating the works written by the Gawain-poet is most problematic because the works could have been written as early as the 1360s or as late as the manuscript itself, which dates around 1400. It is assumed that the poet was alive during the mid-1370s to mid-1380s. The British Library MS Cotton Nero A.x. is the only surviving Middle English manuscript collection consisting solely of alliterative poems. There is firm consensus that the dialect of the scribe and the author localises the poem to the north-west Midlands, centring Cheshire. To present the historical background of Sir Gawain and the Green Knight and associated poems is ultimately a quest to find the anonymous poet. The notion that the Gawain-poet was attached to a provincial noble household, perhaps like that of Sir Bertilak, remains attractive to a number of critics. The quest for the Green Chapel brings Sir Gawain into Cheshire from Wales. Sir Robert Grosvenor, Sheriff of Chester was born circa 1342 at Hulme, Cheshire, England and is an appropriate reference-point in the investigation for the world of the poet. Grosvenor's manor house at Hulme is only a few miles north of the area pin-pointed by dialectologists, on the uplands associated with the Green Chapel mentioned in the poem.[7]

Theories as to possible identity

A number of scholars have proposed that Pearl was written to commemorate the daughter of John Hastings, Earl of Pembroke, and two of his clerks, John Prat and Sir John Donne, have been advanced as possible candidates for authorship.[8]

A theory current in the early part of the 20th century held that a man called Huchoun ("little Hugh") may have authored the poems, having been credited with several works, including at least one known to be in the alliterative form, in the Chronicle of Andrew of Wyntoun. As Cotton Nero A.x contains the words "Hugo de" added in a later hand, its contents were identified with some of the works mentioned by Wyntoun.

This argument, made in greatest detail by a Scottish antiquarian, George Neilson (who claimed that Hugh was a Scottish knight, Hugh of Eglington) is nowadays disregarded, mainly because the poems attributed to Hugh seem to have been composed in widely varying dialects.

The surname of Massey, that of a prominent Cheshire family, is associated with St Erkenwald, a poem occasionally claimed to be another of the Pearl poet's works; the names of Thomas Massey and Elizabeth Booth (a member of the Booth family of Dunham Massey) are written in St Erkenwald's manuscript.

In 1956 Ormerod Greenwood, working on a translation of Gawain, made the suggestion that the author of Pearl and Gawain was one of the Masseys of Sale. He suggested Hugh Massey, based on a number of puns he found incorporated in Pearl (in addition to the "Hugo de" inscription in Cotton Nero A.x)[9] Given the obvious link through the name "Hugh", Hugh Massey has been conflated with Huchoun by some academics.

A later suggestion is John Massey of Cotton (a village mentioned in Gawain); this was first put forward by Nolan and Farley-Hills in 1971.[10] John Massey's authorship is further supported, according to Nolan, by one of Thomas Hoccleve's poems, in which the Hoccleve mentions "my maister Massy", indicating him to be a fearsome critic of poetic metre. The attribution to John Massey is not, however, widely supported by modern critics of the poem.[11]