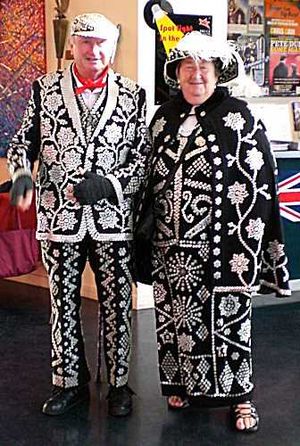 Pearly Kings and Queens, known as pearlies, are an organised charitable tradition of working class culture in London, England.[1]

The practice of wearing clothes decorated with so-called pearl, actually mother-of-pearl buttons, originated in the 19th century.[1] It is first associated with Henry Croft, an orphan street sweeper who collected money for charity. At the time, London costermongers (street traders) were in the habit of wearing trousers decorated at the seams with pearl buttons that had been found by market traders. Croft adapted this to create a pearly suit to draw attention to himself and aid his fund-raising activities.[2][3] In 1911 an organised pearly society was formed in Finchley, north London.[1]

Croft died in January 1930 and his funeral was attended by 400 followers from all over London,[1] receiving national media coverage.[4] In 1934 a memorial was unveiled to him in St Pancras Cemetery and at a speech to mark the occasion he was said to have raised £5,000 for those suffering in London's hospitals.[5] The statue was later moved to the crypt of St Martin-in-the-Fields, Westminster. The inscription reads: