From Infogalactic: the planetary knowledge core
Jump to: navigation, search
For the traditional applied adaption of the guitar technique of slide, see Slide guitar. 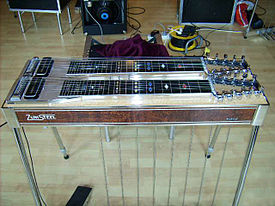 The pedal steel guitar is a type of electric steel guitar that is built on legs or a stand and is fitted with foot pedals and knee levers which adjust the sound of the instrument. Like other electric guitars, the musical instrument produces sound by the vibration of its strings which are converted by magnetic pickup connected to an amplifier.

Pedal steels may have one or two "necks" that typically have 10 strings each, but may have as many as 14. Unlike most other guitars, pedal steel guitars have reference lines on the fretboard where frets would be, but no actual frets. The player changes the pitch of one or more strings by sliding a metal bar (a steel) from one position to another while plucking the strings with the other hand, or vibrating them with a mechanical device. Pedal steels are typically plucked with a thumb pick and fingers, or two or three fingerpicks.

The distinctive feature of pedal steel guitars are the namesake pedals as well as knee levers which affect the pitch of the instrument. The pedals are mounted on a cross bar below the body and the knee levers extend from the bottom of the guitar's body and stretch or slacken the strings to change pitch as the guitar is played. The action of the pedals may be fixed or may be configurable by the player to select which strings the pedals affect. While there are some fairly standard pedal assignments, many advanced players devise their own setups, called copedents. The range of copedents that can be set up varies considerably from guitar to guitar. Aftermarket modifications to make additional copedents possible are common.

The pedal steel, with its smooth portamenti, bending chords and complex riffs, is one of the most recognizable and characteristic instruments of American country music.

A pedal steel guitar is typically rectangular and has no specific resonant chamber or conventional guitar body but only one or more guitar necks. These are mounted on a stand and equipped with foot pedals and usually knee levers. Many models feature two necks, the nearer to the player most often using a C6 tuning and the farther away using an E9 tuning. The most common configuration is one or two necks of ten strings each, but eight-string and twelve-string necks are also popular, and even models with 14 strings on one neck can be found. Three-neck instruments are less common than those with one or two, but are not unknown.

The pedals and/or knee levers (engaged by moving the knees left, right or vertically) on the underside allow the performer to tighten or relax one or more strings in combination to specific tuned notes, changing the instrument's tuning during performance.

The pedal steel guitar is the latest development in a story that started with the invention of a technique of playing used in Hawaii in the late 19th century, wherein the strings were not fretted by the left hand, but rather by sliding an object such as a comb or the back edge of a knife blade along the strings above the neck of the guitar. Several people have been credited with the innovation.

The Hawaiian style of playing was very popular in the United States during the 1920s and 1930s. To increase the volume of the guitar, a resonator cone was added by the Dopyera Brothers to create the resophonic guitar (Dobro).

By the 30's, the hollow guitar body was abandoned for a flat slab of wood or metal and the addition of an electric pickup; this was the lap steel guitar. It was the first electric guitar to achieve commercial success. Several pioneering manufacturers of the electric guitar were first famous for their work on the then more popular electric steel guitar, among them Adolph Rickenbacker, Paul Bigsby and Leo Fender.

The limitations of chord shapes imposed by the use of the steel slide (or "tone bar") led to the addition of multiple necks, resulting in the console steel guitar. The Gibson Guitar Corporation used a system of pedals to change the tuning of the strings on one of their console steels beginning in 1940.[1] This instrument, the Electraharp, had a cluster of pedals radiating from its left rear leg that operated similarly to the pedals on a harp. Alvino Rey was an early player of the Electraharp.[1]

In about 1948, Paul Bigsby began making custom pedal steel guitars that featured pedals mounted to a rack between the front legs of the instrument.[1] Speedy West got the second of Bigsby's creations, the first of his guitars to feature pedals, and used it extensively in his work with Jimmy Bryant. Zane Beck began adding knee levers to console steel guitars, and in 1952, added a set of four knee levers to Ray Noren's console steel.[1] Beck's knee levers lowered the pitches of the strings they operated, which was an action opposite of what the pedals accomplished.[1]

Around 1953, a console steel player named Bud Isaacs attached a pedal to one of the necks of his guitar. The function of the pedal was to change the pitch of two of the strings, whereby Isaacs would have two of the most common steel guitar tunings available on one neck. When he used this pedal to change his tuning while sustaining a chord during the recording of Webb Pierce's hit "Slowly," he touched off a revolution among steel guitarists. Isaacs used a Bigsby model for some time, however. [2]

Buddy Emmons and Jimmy Day split the function of Isaac's pedal into two separate pedals and added two strings to fill in the gaps in the E9 tuning—bringing the number of strings to ten.[2] Although Emmons' and Day's setups do the same thing, Emmons and Day used the opposite of each other's pedals to raise the strings. When one buys a pedal steel today, the manufacturer may ask whether the player wants an Emmons Setup or a Day Setup.

Emmons incorporated a third pedal to his setup, based on a change Ralph Mooney made to his instrument.[2] In 1957, Emmons joined forces with another steel-playing machinist named Harold "Shot" Jackson to form the Sho-Bud company, the first pedal steel guitar manufacturer.[3] Sho-Bud guitars incorporated all the innovations from the 1950s, including ten strings, Emmons's third pedal, and Beck's knee levers. The single-neck pedal steel guitar was now standardized with three pedals and (up to) four knee levers.

Both lap and pedal steel guitars were closely associated with the development of country music and Western swing. The pedal steel's liquid, yearning sound has begun in recent years to be coveted by many modern musicians, beginning in jazz and blues. In particular the rising popularity of alternative country has brought the instrument's sound to a much wider audience, and it has been used in many different musical genres. Jùjú music, a form from Nigeria, uses pedal steel extensively.

A Concerto for Pedal Steel Guitar and Orchestra has been written by Los Angeles composer Michael A. Levine. It was premiered on April 16, 2005, in a performance by the Nashville Chamber Orchestra, with Gary Morse (of Dierks Bentley's and Dwight Yoakam's bands) as soloist, and Paul Gambill conducting. The piece is believed to be the first concerto ever written for the solo steel guitar.[citation needed]

A performer typically sits on a stool or seat at the instrument. The right foot is used mainly to operate a volume pedal. The left foot is primarily used to press one or more of the instrument's foot pedals. The knees are positioned under the instrument's body so that by moving them left, right or even vertically, they can push levers that are mounted from underneath the body of the steel guitar.

The strings are positioned high above the neck of the instrument. Rather than controlling the vibrating length of strings by pressing them to frets on a fingerboard, the player applies a polished metal bar (the steel or "tone bar"). The player slides the steel on the strings—to and away from the bridge to change pitch. If the bar is perpendicular to the neck (oriented like a fret), it changes the length (and hence, pitch) of all strings that it touches equally. The player may also "slant" the bar, holding it at an angle to effect strings unequally.

The right hand (for a right-handed player) plucks the strings, usually with a set of thumb and finger picks—but some players use only a thumb pick, and some only use their fingernails. A player can use either hand to mute the vibration of the plucked strings, which is called "blocking" or muting.

A variable volume foot pedal contributes to various sonic effects. A prominent technique is to eliminate the attack of the string. The player plucks a string with the volume pedal in the off position, then quickly rocks the pedal forward to create a smooth violin-like sound. The player uses the pedals and knee levers to raise and lower the pitch of certain strings "on the fly" while playing.

The player can produce characteristic effects by changing the pitch of one or more strings while other strings stay at the same pitch, or change at differing rates, or in the other direction. Melodic lines are composed primarily of dyads (two-note chords). In the E9 tuning, many characteristic idioms involve tonic-dominant and tonic-subdominant harmonic relationships.

Mastering the pedal steel guitar can take time, because of its technical and complex harmonic inner workings and the unique physical techniques a player must learn to create the instrument's trademark sounds. In country music, where the pedal steel guitar is most commonly heard, talented players are highly esteemed.

For a table of several tunings of the pedal steel guitar, see copedent.