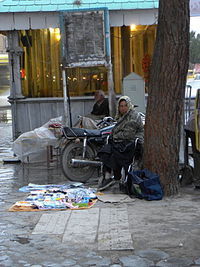 A peddler woman in Nishapur. 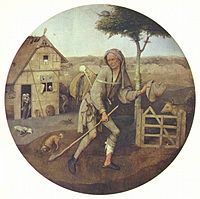 A peddler, in British English pedlar, also known as a canvasser, cheapjack, monger, higler or solicitor (with negative connotations since the 16th century), is a traveling vendor of goods. In England, the term was mostly used for travellers hawking goods in the countryside to small towns and villages; they might also be called tinkers or gypsies. In London more specific terms were used, such as costermonger. There has long been a suspicion of dishonest or petty criminal activity associated with pedlars and travellers.[1][2] 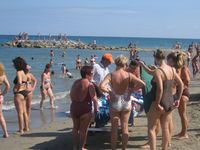 A Moroccan peddler in Ceriale, Italy. 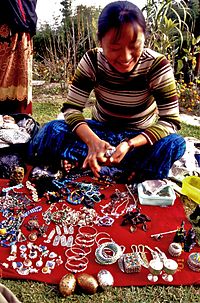 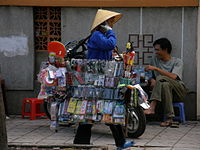 The origin of the word, known in English since 1225, is unknown, but it might come from French pied, Latin pes, pedis "foot", referring to a petty trader travelling on foot.

Peddlers usually travelled on foot, carrying their wares, or by means of a person- or animal-drawn cart or wagon (making the peddler a hawker).

Modern peddlers may use motorized vehicles to transport themselves and their commodities. Typically, they operate door-to-door or at organized events such as fairs.

In many economies this work was often left to nomadic minorities, such as Gypsies, travellers, or Yeniche, offering a varied assortment of goods and services, both evergreens and (notoriously suspicious) novelties. Peddlers sometimes doubled as performers, healers, or fortune-tellers.

While peddlers had a significant role in supplying isolated populations even with fairly basic and diverse goods such as pots and pans, horses, and news, their market share has in modern times been drastically reduced as increasing density of population and buying power encouraged sedentary, even specialized sales points, while modern transport, mail order, refrigeration and other technology allow even rural clients alternative channels of purchase.

Tinware was manufactured in Berlin, Connecticut, as early as 1770, and tin, steel and iron goods were peddled from Connecticut through the North American colonies- the Connecticut clock maker and clock peddler was the 18th century embodiment of Yankee ingenuity.

In the United States, the era of the traveling peddler probably peaked in the decades just before the American Civil War. The large advances in industrial mass production and freight transportation as a result of the war laid the groundwork for the beginnings of modern retail and distribution networks. Further, the rise of popular mail order catalogues (e.g. Montgomery Ward began in 1872) offered another way for people in rural or other remote areas to obtain items not readily available in local stores.[citation needed]

In the United States, the travelling salesman became a stock character in countless jokes. Such jokes are typically bawdy, and usually feature small town rubes, farmers and other country folk, and frequently another stock character, the farmer's daughter.

India has special laws enacted, by the efforts of planners which give mongers higher rights as compared to other businessmen. For example, mongers have a right of way over motorized vehicles.

In the modern economy a new breed of peddler, generally encouraged to dress respectably to inspire confidence with the general public, has been sent into the field as an aggressive form of direct marketing by companies pushing their specific products, sometimes to help launch novelties, sometimes on a permanent basis. In a few cases this has even been used as the core of a business.

In Britain, peddling is still governed by the Pedlars Act of 1871, which provides for a "pedlar's certificate". Application is usually made to the police. In the late 20th century, the use of such certificates became rare as other civic legislation including the Civic Government (Scotland) Act 1982 and the Local Government (Miscellaneous Provisions) Act 1982 for England & Wales introduced a street trader's licence. As of 2008 the pedlar's certificates remain legal and in use, although several local councils have sought to rid their area of peddlers by way of local bylaw or enforcement mechanisms such as making them apply for a street trader's licence. 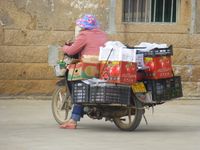 Literal compounds formed from these synonyms are:

Metaphoric compounds, since the 16th century mostly pejorative, formed from these synonyms are:

Names, most archaic, of product- or industry-specific types of peddlers include:

Names, some pejorative, of other sub- or supertypes or close relatives of peddlers include:

Although there are basic similarities between the activities in the Old World and the New World there are also significant differences. In Britain the word was more specific to an individual selling small items of household goods from door to door. It was not usually applied to Gypsies. 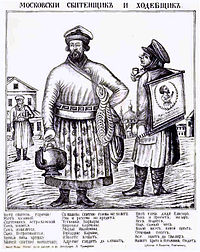 The Cheap Jack type appears often in 19th century literature. The most famous example is probably Charles Dickens' ‟Doctor Marigold‟. A short story it was originally written for one of his Christmas editions of 'All the Year Round'. In collected editions of Dickens' works, it appears in the volume ‟Christmas Stories‟.