In 1982 Peder Skram was involved in the accidental launch of a Harpoon missile, fortunately without inflicting bodily harm.

Peder Skram was decommissioned in 1990, internal installations were auctioned off as scrap two years later. In the mid-1990s it was decided to restore her as a museum ship. 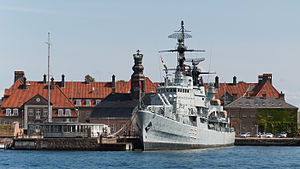 The HDMS Peder Skram in its current location in Copenhagen Holmen.

Peder Skram is today operated as a museum ship on a volunteer basis. It is open to visitors every day from 11am to 5pm in the school summer and autumn vacations and in all weekends in June and August.[3]