The Cathedral Church of Saint German or Peel Cathedral, rebranded as Cathedral Isle of Man is located in Peel, Isle of Man. The cathedral is also one of the parish churches in the parish of the West Coast which includes the town of Peel,[1] and was built 1879-84.[2] It was made the cathedral by Act of Tynwald in 1980.[3] 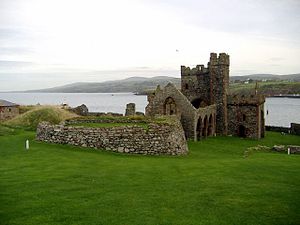 Patron of the Cathedral, St German of Man (not to be confused with Germanus of Auxerre), was a Celtic missionary and holy man who lived from about 410 to 474. St German’s day is celebrated on 13 July.[4]

The original cathedral of St German was inside the walls of Peel Castle and built sometime in the 12th century when St Patrick's Isle was in the possession of Norse kings. At that time the church followed the Sarum Rite, prevalent throughout mush of the British Isles. Around 1333 the Lords of Man refortified St. Patrick’s Island and occupied the church as a fortress. In 1392 William Le Scroop repaired the Cathedral.[5]

The building fell into ruin in the 18th century. After a considerable period of debate over who owned the ruins and site, the decision was eventually taken not to rebuild that cathedral. The present building was constructed 1879-84 to replace St Peter's Church in Peel's market place.[6] In 1895, the bishop consecrated his chapel at the bishop's palace as pro-cathedral and instituted a chapter of canons with himself as dean. That arrangement (bishop as dean) persisted even after the consecration of the new cathedral.

The cathedral has a dean and chapter.[7] Until 15 October 2011, the Bishop of Sodor and Man was dean ex officio, but on that date the vicar of the parish became dean ex officio,[8] as had been the historical arrangement from the 12th century until the late 19th.[9] The chapter consists of the Archdeacon of Man ex officio and four canons who are all parochial clergy in the Diocese.

In July 2015, the Princess Royal, as patron of a development campaign regarding the Cathedral, attended a Thanksgiving Service at Peel Cathedral.[10] St. German's Cathedral is the mother Church of the Diocese of Sodor and Man, which today consists of the Isle of Man.[11]

The Cathedral Choir consists of a mixed boy and girl treble line (aged 7–14 years old) which sing Choral Evensong each Sunday at 3.30pm, and an adult voluntary section (SATB) which sing the Choral Eucharist on 1st, 2nd and 4th Sunday mornings each month at 10.30 am. For festival services and large events the children and adults sing together. There is a developing programme of Choral Scholarships for secondary school students.

The Cathedral has a large two manual Brindley & Foster organ in the chancel. Across the next 5 years it is planned that the pipe organ will be rebuilt, re-ordered and significantly enlarged to meet the demands of the cathedral's developing choral programme.