From Infogalactic: the planetary knowledge core
Jump to: navigation, search
For the Nazi Germany facilities for the V-1 flying bomb and the V-2 missile, see Peenemünde Airfield and Peenemünde Army Research Center.

Peenemünde (German pronunciation: [peːnəˈmʏndə], English: "Peene [River] Mouth") is a municipality on the Baltic Sea island of Usedom in the Vorpommern-Greifswald district in Mecklenburg-Vorpommern, Germany. It is part of the Amt (municipal confederation) of Usedom-Nord. The community is known for the Peenemünde Army Research Center, where the world's first functional large-scale liquid-propellant rocket, the V-2, was developed. 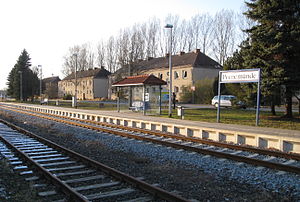 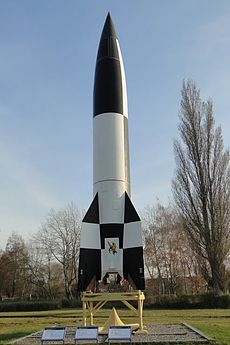 The village with its seaport is located on the westernmost extremity of a long sand-spit, where the Peene empties into the Baltic Sea, in the northwestern part of Usedom Island. To the southeast it borders on the sea resort of Karlshagen.

Peenemünde harbour can be reached by ferry boat across the Peene from Kröslin, liners also run along the Baltic coast to Rügen Island. The local railway station is the northern terminus of the Usedomer Bäderbahn line to Zinnowitz. Air service for the village is available at the Peenemünde Airfield.

During the 10th and 11th centuries, Peenemünde was part of the region of Circipania, an area settled by the Circipanes, a West Slavic tribe constituent of the Lutici federation. Circipania was incorporated into the Billung March of the Holy Roman Empire in 936, but the Empire's influence in the region decayed by the end of that century after a successful Slavic uprising. During the late 12th century, in the aftermath of the Wendish Crusade, the region fell under the rule of the Duchy of Pomerania. After the Treaty of Kremmen in 1236, most of Circipania was transferred to the Margraviate of Brandenburg.[2]

In World War II, the area was highly involved in the development and production of the V-2 rocket, until the production's relocation to Nordhausen. The village's docks were used for the ships which recovered V-2 wreckage from test launches over the Baltic Sea. German scientists such as Wernher von Braun, who worked at the V-2 facility, were known as "Peenemünders". The entire island was captured by the Soviet Red Army on 5 May 1945. The gas plant for the production of liquid oxygen still lies in ruins at the entrance to Peenemünde.

The post-war port was a Soviet naval base until turned over to the armed forces of East Germany in 1952. The seaport facilities were used at first by the East German Seepolizei (sea police) after new facilities for police motorboats had been built. On 1 December 1956 the headquarters of the First Fleet of the East German Volksmarine (navy) was established at Peenemünde.

The birthplace of modern rocket science is today displayed at the Peenemünde Historical Technical Museum, a World War II museum on the European Route of Industrial Heritage opened in 1992 in the power station of the former Army Testing Site[3] and the area of the World War II power station (now part of the village) – exhibits include a V-1 and a V-2.