From Infogalactic: the planetary knowledge core
Jump to: navigation, search
For other uses, see Irish nobility.

The Peerage of Ireland consists of those titles of nobility created by the English monarchs in their capacity as Lord or King of Ireland, or later by monarchs of the United Kingdom of Great Britain and Ireland.[1] The creation of such titles came to an end in the 19th century. The ranks of the Irish peerage are Duke, Marquess, Earl, Viscount and Baron. The Crown of the United Kingdom of Great Britain & Northern Ireland continues to exercise jurisdiction over the Peerage of Ireland, including those peers whose titles derive from places located in what is now the Republic of Ireland.[2] However Article 40.2 of the Irish Constitution forbids the state conferring titles of nobility and a citizen may not accept titles of nobility or honour except with the prior approval of the Government.[3] 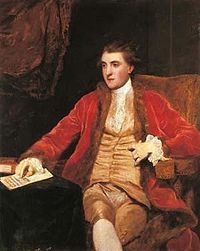 A handful of titles in the peerage of Ireland date from the Middle Ages. Before 1801, Irish peers were those who had the right to sit in the Irish House of Lords, but after the Union in 1801, they elected just twenty-eight representative peers to the House of Lords at Westminster.

Both before and after the Union, Irish peerages were often used as a way of creating peerages which did not grant a seat in the English House of Lords and so allowed the grantee (such as Clive of India) to sit in the House of Commons in London. As a consequence, many Irish peers had little or no connection to Ireland, and indeed the names of some Irish peerages refer to places in Great Britain (for example, the Earldom of Mexborough refers to a place in England and the Ranfurly refers to a village in Scotland). Irish peerages continued to be created for almost a century after the Union, although the treaty of Union placed restrictions on their numbers: three needed to become extinct before a new peerage could be granted, until there were only 100 Irish peers – a condition still not achieved. There was a spate of creations of Irish peerages from 1797 onward, mostly peerages of higher ranks for existing Irish peers, as part of the negotiation of the Act of Union; this ended in the first week of January 1801, but the restrictions of the Act were not applied to the last few peers. Irish peerages were created in the early nineteenth century at least as often as the Act permitted, but the pace then slowed.

The last two individuals to be granted Irish peerages were the promotion of the Marquess of Abercorn (a peerage of Great Britain) to be Duke of Abercorn in the Irish Peerage when he became Lord-Lieutenant of Ireland in 1868, and the granting of the Curzon of Kedleston barony to George Curzon when he became Viceroy of India in 1898. Peers of Ireland have precedence below peers of England, Scotland, and Great Britain of the same rank, and above peers of the United Kingdom of the same rank; but Irish peers created after 1801 yield to United Kingdom peers of earlier creation. Accordingly, the Duke of Abercorn (the junior Duke in the Peerage of Ireland) ranks between the Duke of Sutherland and the Duke of Westminster (both dukes in the Peerage of the United Kingdom).

In the following table of the Peerage of Ireland as it currently stands,[4] each peer's highest titles in each of the other Peerages (if any) are also listed. Irish peers possessed of titles in any of the other Peerages (except Scotland, which only got the right to an automatic seat in 1963, with the Peerage Act 1963) had automatic seats in the House of Lords until 1999.

In Ireland, barony may also refer to an obsolete political subdivision of a county. There is no connection between such a barony and the noble title of baron.