From Infogalactic: the planetary knowledge core
Jump to: navigation, search
For other uses, see Peloton (disambiguation). 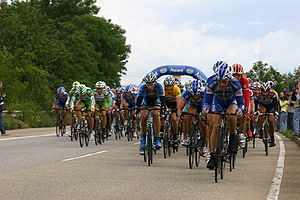 The peloton during the 2005 Tour de France. Clustering of the teams is apparent.

The peloton (from French, originally meaning 'platoon') is the main group or pack of riders in a road bicycle race. Riders in a group save energy by riding close (drafting or slipstreaming) near (particularly behind) other riders. The reduction in drag is dramatic; in the middle of a well-developed group it can be as much as 40%.[1]

The term is also used to refer to professional cyclists in general. 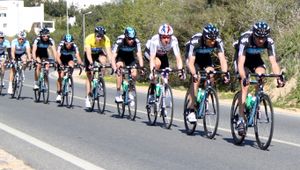 Team Sky riding in a straight line to increase slipstreaming, thus reducing drag and conserving energy for cyclists behind, often for key riders such as sprinters or GC cyclists.

The peloton travels as an integrated unit (similar in some respects to birds flying in formation) with each rider making slight adjustments in response to their adjacent riders (particularly the one in front of each). When developed, riders at the front are exposed to higher loads, and will tend to slip off the front in order to rejoin the pack farther back. With sufficient room to manoeuvre, this may develop into a fluid situation where the center of the peloton appears to be pushing through its own leading edge.

While only the riders exposed to the wind, at the front and on the windward side when there is a significant crosswind, are the ones doing most of the work, it is usually advantageous to be closer to the front of the peloton. One reason is to avoid being affected by the 'elastic band effect' in which a change in speed becomes amplified as it propagates to the back of the peloton. The rider riding behind a rider who is changing his/her speed must make the adjustment at a slightly faster rate (due to reaction time) to avoid collisions.

Tactical factors also apply.[2] Teams generally attempt to cluster their members in the peloton in order to maximize their ability to affect the pack as a whole. For instance, if a team member is currently in a breakaway in front of the peloton, it is advantageous for the remaining members to slow the peloton as much as possible in an attempt to avoid catching the breakaway. This can be particularly effective in tight turns or narrow roads, where a single team can block the progress of the pack if they are in a favorable position. A similar situation occurs at the end of the race when teams will cluster in front of their sprinter, blocking the wind as long as possible while still leaving an open path in front for the sprinter to break out near the finish line.

It is typical for large hills to split up pelotons, as the aerodynamic factors are much less important at slower climbing speeds and power-to-weight ratio is the key determinant of speed.