Pembroke College is one of the constituent colleges of the University of Oxford in England, located in Pembroke Square. The college was founded in 1624 by King James I of England / VI of Scotland, using in part the endowment of merchant Thomas Tesdale, and was named after William Herbert, 3rd Earl of Pembroke, Lord Chamberlain and then-Chancellor of the University.[2]

As of 2011, Pembroke had an estimated financial endowment of £55.6 million.[3] Pembroke's JCR is notable as the wealthiest in Oxford. Pembroke offers the study of almost all the courses offered by the university.

The current Master of the college is Dame Lynne Brindley, former head of the British Library.

In the early seventeenth century, the endowment of Thomas Tesdale—a merchant from nearby Abingdon – and Rev. Richard Wightwick, the parish priest of Donnington, Shropshire – enabled the conversion of the Broadgates Hall, which had been a University hostel for law students since its construction in the fifteenth century, to form the basis of a fully-fledged college. The letters patent to found the college were signed by King James I in 1624, with the college being named after William Herbert, 3rd Earl of Pembroke, Lord Chamberlain, Chancellor of the University, and rumoured patron of William Shakespeare.[2] 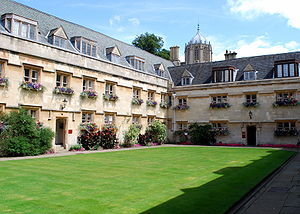 Old Quad, with Tom Tower in the distance 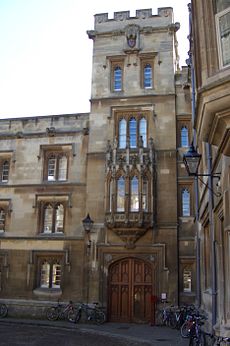 The entrance to Pembroke College in Pembroke Square. Samuel Johnson had rooms on the second floor above the entrance, as an undergraduate in 1728.

Following its foundation, the college proceeded to expand around Broadgates, building what is now known as "Old Quad" in the 1600s. Built in stages through the seventeenth century out of the local Cotswold limestone, space restrictions saw the south-side of the Quad built directly on top of the old City Wall. A Chapel was built in 1732, and the introduction of further accommodation in 1846, and the Hall in 1848 to designs by Exeter-based architect John Hayward[4] created "Chapel Quad"—widely considered one of the most beautiful Quads in the University.[5] The Chapel was designed and built by William Townsend, although the interior was dramatically redesigned by Charles Kempe—a Pembroke graduate—in 1884. Pembroke alumnus Dr. Damon Wells is a significant benefactor of the College over many years; he enabled the restoration of the Chapel in 1972, and continues to support the Chaplaincy and History Fellowship. The Chapel which is still used for regular worship bears his name.[6]

Further expansion of the college came in the 1960s, after the closure of Beef Lane to the north of Chapel Quad. The private houses north of the closed road were acquired by the College in a piecemeal fashion and reversed so that access was only possible from the rear. The new area is now known as "North Quad", which was formally opened in 1962.[5] A modern annex, built near to college on the banks of the Isis at Grandpont, provides accommodation for thirty six graduates and around forty undergraduates. The building is commonly known as "The GAB", after the diplomat Sir Geoffrey Arthur—a former master of the college (1975–1985).[7]

In April 2013, Pembroke College, until then one of Oxford’s physically smaller colleges, invited the Duke of Kent to officially open two new quadrangles, an auditorium, a cafe and over ninety new rooms, all joined to the existing city-centre site by a bridge arching across a cobbled Oxford street. The bridge 'lands' in the old fellows' garden, which sits atop the original medieval city wall. Undergraduates are now able to live in college premises for all years of study, and postgraduates benefit from a number of more rooms and six flats for those with partners. The new quads house a 170-seat multi-purpose auditorium, a new cafe, art gallery, and teaching and function rooms.[8]

The arms of Pembroke College were granted by the College of Heralds on 14 February 1625, the formal blazon describing it as:

“Per pale azure and gules three Lyons rampant, two and one, Argent, in a Cheife party per pale Argent and Or, in the first a Rose Gules, seeded or, barbed vert in second a Thistle of Scotland proper”.

Both James I, as founder of the college, and the Earl of Pembroke are commemorated in the arms. The former, representing the union of the crowns as James I of England and James VI of Scotland, is symbolised by the rose (of England) and the thistle (of Scotland). The three lions rampant are taken from the Earl’s personal coat arms.

Pembroke offers a broad range of courses, covering almost all the subject areas offered by the university; Literae Humaniores (Classics) is one exception. In particular, the college has had a strong involvement with Economics, as well as Management Studies, being the first traditional Oxford College to appoint a Fellow in the field.[9] The college has maintained a close relationship with the Saïd Business School.

In March 2002 two Oxford fellows resigned after allegations that they had offered a place to the fictional child of an undercover reporter in return for a donation to the college library. The journalist alleged that he had taped a conversation where he posed as the father of a fictitious son.[10] 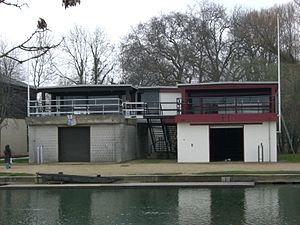 Pembroke is home to a Junior Common Room (undergraduate community) notable for its artistic wealth and sporting prowess. The JCR is the wealthiest in Oxford due to the purchase and sale of a Francis Bacon painting in the early 20th century; it was bought in 1953 for £150 and sold for £400,000 in 1997.[11] The JCR has used those funds to support a socially progressive student support scheme and an impressive artistic acquisition programme.

The Middle Common Room, for postgraduates, is housed in a suite of historic mahogany-panelled rooms and is noted for its connections with a wide range of nations. Its current patron is Lord Kerr, former Permanent Secretary at the Foreign and Commonwealth Office, British Representative to the European Union and Ambassador to the United States.[citation needed]

The college has a strong sporting reputation across the university. Recent years have seen the JCR achieve particular success at rugby, cricket, football, hockey and darts. The MCR has been particularly strong at women's boxing, polo and cricket. Despite being a newly formed team, Pembroke has also done well in pool, reaching the quarterfinals in the 2014 Pool Cuppers.

Pembroke College Boat Club is one of Oxford's strongest boat clubs, in 2013 holding both the Torpids and Summer Eights men's headship, with the women's 1st boat sitting at 4th and 7th places respectively. Pembroke has been the top club in aggregate points across all boats for three years running.[12] In 2003, Pembroke became the first college ever to win the "Double Headship Trophy" for having both men's and women's Eights head the river. 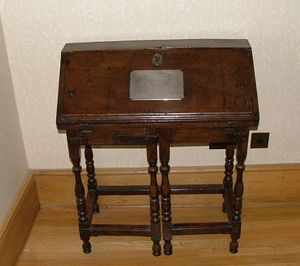 Samuel Johnson was one of the College's more famous alumni, though he did not complete his degree (he was later awarded an honorary degree by the University); lack of funds forced him to leave Oxford after about a year and a half. Two of his desks and various other possessions are displayed around the college. He spoke fondly of Pembroke to his death, recalling especially the college's many poets, telling friends that ‘we were a nest of singing birds.'[13] James Smithson, whose bequest founded the Smithsonian Institution in Washington, D.C. (despite him never having visited the United States) was an undergraduate at Pembroke, under the name "James Lewis Macie"—he changed his name to that of his natural father after the death of his mother. Meanwhile, Senator J. William Fulbright, who established the Fulbright Program, was a Rhodes Scholar at Pembroke in the 1920s.

Thomas Randolph, Principal of Pembroke's precursor mediaeval hall, Broadgates, served as ambassador for Elizabeth I in Scotland from 1559, where he acquired the friendship of Mary, Queen of Scots, until he was accused of supporting the rebellion of James Stuart.[14] In 1568 he was sent to Russia to secure trading rights from Ivan IV, better known as Ivan the terrible, and succeeded in winning valuable access to Russia for English merchants.

Beyond the transatlantic, the Foreign Minister of Poland, Radek Sikorski, the Prime Minister of Hungary, Viktor Orbán, and King Abdullah II of Jordan all studied at Pembroke.

J. R. R. Tolkien was a Fellow of Pembroke from 1925 to 1945, and wrote The Hobbit and the first two books of The Lord of the Rings during his time there. Robin G. Collingwood, historian, philosopher, and author of the The Idea of History, was a fellow of the college between the Great War and the Second World War.

Among the College's more recent Masters were Sir Geoffrey Arthur, former chair of the Joint Intelligence Committee and Roger Bannister, the first man to run the mile in under four minutes. Dame Lynne Brindley, the former Chief Executive of the British Library (July 2000 until July 2012), the United Kingdom's national library, was elected to succeed Giles Henderson as the Master of Pembroke College, and began her tenure on August 1, 2013.[16]