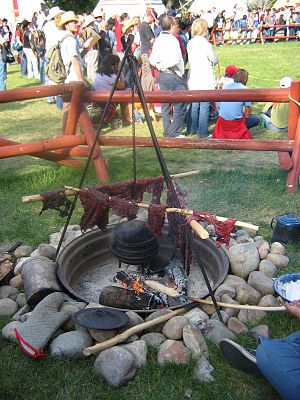 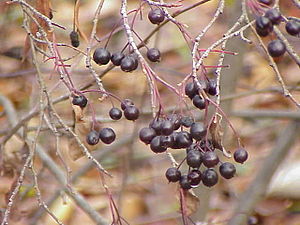 Pemmican is a concentrated mixture of fat and protein used as a nutritious food. The word comes from the Cree word pimîhkân, which itself is derived from the word pimî, "fat, grease".[1] It was invented by the native peoples of North America.[2][3] It was widely adopted as a high-energy food by Europeans involved in the fur trade and later by Arctic and Antarctic explorers, such as Sir Ernest Henry Shackleton, Robert Falcon Scott and Roald Amundsen.

The specific ingredients used were usually whatever was available; the meat was often bison, moose, elk, or deer. Fruits such as cranberries and saskatoon berries were sometimes added. Cherries, currants, chokeberries and blueberries were also used, but almost exclusively in ceremonial and wedding pemmican.[4] 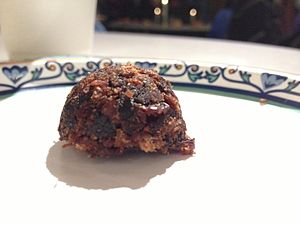 Traditionally, pemmican was prepared from the lean meat of large game such as buffalo, moose, elk or deer. The meat was cut in thin slices and dried over a slow fire, or in the hot sun until it was hard and brittle. About five pounds of meat are required to make one pound of dried meat suitable for pemmican. Then it was pounded into very small pieces, almost powder-like in consistency, using stones. The pounded meat was mixed with melted fat in an approximate 1:1 ratio.[5] In some cases, dried fruits, such as saskatoon berries, cranberries, blueberries, or choke cherries, were pounded into powder and then added to the meat/fat mixture. The resulting mixture was then packed into rawhide bags for storage.

In his notes of 1874, North-West Mounted Police Sergent-Major Sam Steele records three ways of serving pemmican: raw; boiled in a stew called "rubaboo"; or fried, known in the West as a "rechaud" [1]

"The pemmican was cooked in two ways in the west; one a stew of pemmican, water, flour and, if they could be secured, wild onions or preserved potatoes. This was called 'rubaboo'; the other was called by the plains hunters a 'rechaud'. It was cooked in a frying pan with onions and potatoes or alone. Some persons ate pemmican raw, but I must say I never had a taste for it that way." (Sam Steele 1874)[8]

The voyageurs of the Canadian fur trade had no time to live off the land during the short season when the lakes and rivers were free of ice. They had to carry their food with them and if the distance travelled was great be resupplied along the way.[9] A north canoe (canot du nord) with six men and 25 standard 90 lb (41 kg) packs required about four packs of food per 500 miles (800 km). Montreal-based canoemen could be supplied by sea or with locally grown food. Their main food was dried peas or beans, sea biscuit and salt pork. (Western canoemen called their Montreal-based fellows mangeurs de lard or "pork-eaters".) In the Great Lakes some maize and wild rice could be obtained locally. By the time trade reached the Winnipeg area the pemmican trade was developed.[9] 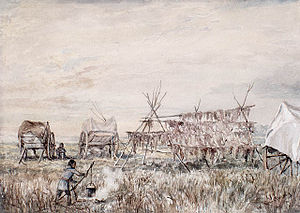 Métis would go southwest onto the prairie in Red River carts, slaughter buffalo, convert it into pemmican and carry it north to trade at the North West Company posts. For these people on the edge of the prairie the pemmican trade was as important a source of trade goods as was the beaver trade for the Indians further north. This trade was a major factor in the emergence of a distinct Métis society. Packs of pemmican would be shipped north and stored at the major fur posts: Fort Alexander, Cumberland House, Île-à-la-Crosse, Fort Garry, Norway House, and Edmonton House. So important was pemmican that, in 1814, governor Miles Macdonell started the Pemmican War with the Métis when he passed the short-lived Pemmican Proclamation, which forbade the export of pemmican from the Red River Colony.[10]

Alexander Mackenzie relied on pemmican on his 1793 expedition across Canada to the Pacific.[11]

North Pole explorer Robert Peary used pemmican on all three of his expeditions, from 1886 to 1909, for both his men and his dogs. In his 1917 book Secrets of Polar Travel, he devoted several pages to the food, stating, "Too much cannot be said of the importance of pemmican to a polar expedition. It is an absolute sine qua non. Without it a sledge-party cannot compact its supplies within a limit of weight to make a serious polar journey successful."[12]

British polar expeditions fed a type of pemmican to their dogs as "sledging rations". Called "Bovril pemmican" or simply "dog pemmican", it was a beef product consisting of 2/3 protein and 1/3 fat, without carbohydrate. It was later ascertained that although the dogs survived on it, this was not a nutritious and healthy diet for them, being too high in protein.[13] Members of Ernest Shackleton's 1914–1916 expedition to the Antarctic resorted to eating dog pemmican when they were stranded on ice for the winter.[14]

During the Second Boer War (1899–1902), British troops were given an iron ration made of four ounces of pemmican and four ounces of chocolate and sugar. The pemmican would keep in perfect condition for decades. It was considered much superior to biltong, a form of cured game meats commonly used in Africa. This iron ration was prepared in two small tins (soldered together) which were fastened inside the soldiers' belts. It was the last ration used and it was used only as a last resort---when ordered by the commanding officer. A man could march on this for 36 hours before he began to drop from hunger.[15]

American adventurer Frederick Russell Burnham, while serving as Chief of Scouts for the British Army in South Africa, required pemmican to be carried by every scout.[16]

Kohler, the narrator of William Gass's monumental novel The Tunnel, works with another professor, Culp, who also leads a Boy Scout troop and teaches its members to make pemmican. Kohler adds, "Pemmican: it's good against the bomb."

The children in the literary series Swallows and Amazons frequently refer to corned beef as pemmican as it seems more adventurous to them. It is also mentioned in Alfred Lansing's 1959 book Endurance: Shackleton's Incredible Voyage.

In the science fiction story Hiero's Journey by Sterling E. Lanier,[18] Hiero, a "Metz" living thousands of years in the future, has a trail food, "pemeecan", which is a mixture of fat, maple sugar, and dried berries.

Harvey Randall, in the book Lucifer's Hammer, makes pemmican in preparation for a cometary impact.

The explorer Samuel Hearne writes about his experiences with pemmican in his book A Journey from Prince of Wales’ Fort in Hudson’s Bay, to the Northern Ocean . . . in the years 1769, 1770, 1771 and 1772. In the book Hearne describes many instances of himself and his North Indian companions relying on pemmican as their only food for extended periods of time during their travels. According to Hearne the North Indians in his company would, when being in an area with large amounts of game, make a habit of stopping to hunt large amount of game in order to prepare as much pemmican as could be carried. If their stocks of pemmican was already full the Indians would often still kill as much big game as possible but only take and eat the marrow-bones, fat and tongue while the rest of the animal was left behind.

In the adult novel She Who Remembers, Kwani, the main protagonist, is shown how to make pemmican by blending together animal fats, meat, and berries.

Dylan Thomas in his 1946 BBC radio piece "Holiday Memory" refers to a child's ride on a seaside donkey imagined as being alongside "..Atlas-muscled Mounties, rifled and pemmicanned..." .

In the novel The Swiss Family Robinson, the eldest son, Fritz, made pemmican out of bear meat.

In several of the novels in the Voyages Extraordinaires series by Jules Verne, pemmican is used by the characters as a foodstuff during their voyage.

In many of Louis L'Amour's Western novels, Pemmican is eaten as a staple of trail travel.

In Ken Kesey's novel Sometimes a Great Notion, the narrator Leland describes his brother Hank's girlfriend as "Hank's pale wildwood flower, I decided; barefooty and fattened out round and comfortable on huckleberry and pemmican."

In the comic series Oumpah-pah, the eponymous main character frequently eats pemmican, though his European friends routinely get sick from eating it.

In Michael Blake's novel "Dances With Wolves", Lieutenant Dunbar " devoured a lunch of pemmican and berries" with Kicking Bird and Wind In His Hair.

In Ian Fleming's novel You Only Live Twice, James Bond adds "a pair of black flippers to his equipment, a small supply of pemmican-like meat, benzedrine tablets, a plastic flask of water."