From Infogalactic: the planetary knowledge core
Jump to: navigation, search
For other uses, see Pendant (disambiguation).
Not to be confused with pendent, pennant, or pedant.
This article is about the piece of jewelry. For person who is excessively concerned with formalism and precision, see pedant. 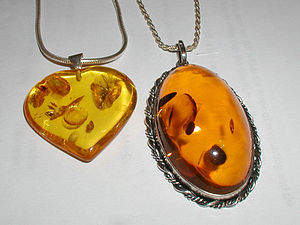 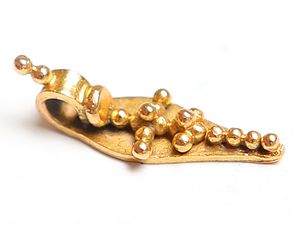 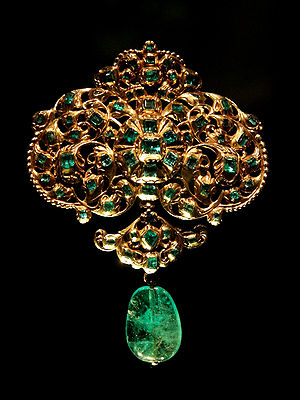 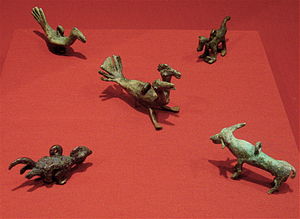 The word pendant derives from the Latin word "pendere", and Old French word "pendre", both of which translate to "to hang down". It comes in the form of a loose-hanging piece of jewelry, generally attached by a small loop to a necklace, which may be known as a "pendant necklace".[1] A pendant earring is an earring with a piece hanging down. In modern French "pendant" is the gerund form of “hanging” (also meaning “during”).

One of the earliest types of bodily adornment is a pendant, (a hanging ornament, as an earring or the main piece suspended from a necklace.) Primeval man liked to put a tiny hole in a beautiful rock and slip a string usually made of grass or vine so it could be hung around the neck.[citation needed]

Shells and other indigenous materials could also be used. In Ancient Egypt, Pharaohs normally wore scarab beetle pendants to symbolize their wealth and power.[citation needed] Royalty and nobility in Ancient Egypt also wore a certain type of pendant called a cartouche.[1]

Pendants can have several functions, which may be combined:

The many specialized types of pendants include lockets which open, often to reveal an image, and pendilia, which hang from larger objects of metalwork.

Though amulets come in many forms, a wearable amulet worn around the neck or on the arm or leg in the form of a pendant is the most common. These are objects believed to possess magical or spiritual power to protect the wearer from danger or dispel evil influences.[2]

Similar to an amulet, a talisman is an object believed to possess supernatural traits. However, while an amulet is strictly a defensive object, a talisman is meant to confer special benefits or powers upon the wearer.[3]

A locket is a small object that opens to reveal a space which serves to hold a small object, usually a photograph. They typically come in the form of a pendant hanging from a necklace, though they will occasionally be hung from a charm bracelet.[4]

A medallion is most often a coin-shaped piece of metal worn as a pendant around the neck or pinned onto clothing. These are generally granted as awards, recognitions, or religious blessings.[5]

In the first decade of the 21st century jewellers started to incorporate USB flash drives into pendants.[6][7]