For P&O Cruises, the cruise line spun off and now owned by Carnival, see P&O Cruises.
For P&O Nedlloyd, the former shipping company, which is now part of Maersk Line, see P&O Nedlloyd.

P&O Cruises was spun off from P&O in 2000, and is now owned and operated by Carnival Corporation & plc. The former shipping business, P&O Nedlloyd, was bought by and is now part of Maersk Line. 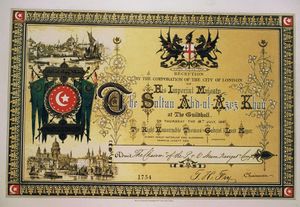 Admission ticket to Lord Mayor Thomas Gabriel's reception of H.I.M. The Sultan Abd-ul-Aziz Khan at The Guildhall, 18 July 1867, issued to The Chairman of the P. & O. Steam Navigation Company.

In 1822, Brodie McGhie Willcox, a London ship broker, and Arthur Anderson, a sailor from the Shetland Isles, northern Scotland, went into partnership to operate a shipping line, primarily operating routes between England and Spain and Portugal. In 1835, Dublin shipowner Captain Richard Bourne joined the business, and the three men started a regular steamer service between London and Spain and Portugal - the Iberian Peninsula - using the name Peninsular Steam Navigation Company, with services to Vigo, Oporto, Lisbon and Cádiz. The company flag colours are directly connected with the Peninsular flags: the white and blue represent the Portuguese flag in 1837, and the yellow and red the Spanish flag. 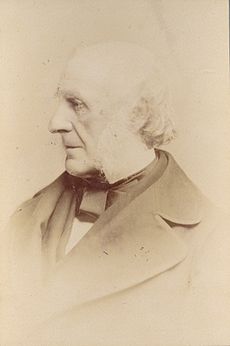 In 1837, the business won a contract from the British Admiralty to deliver mail to the Iberian Peninsula and in 1840 they acquired a contract to deliver mail to Alexandria in Egypt. In 1847, shortly after the Opium War, P&O entered the opium trade; shipping 642,000 chests of Bengal and Malwa opium in the next eleven years. They faced stiff competition from the incumbent shippers, Jardines and the Apcar Line.[1] The present company, the Peninsular and Oriental Steam Navigation Company, was incorporated in 1840 by a Royal Charter, and its name therefore includes neither "Plc" nor "Limited".

Mail contracts were the basis of P&O's prosperity until the Second World War, but the company also became a major commercial shipping line and passenger liner operator. In 1914, it took over the British India Steam Navigation Company, which was then the largest British shipping line, owning 131 steamers. In 1918, it gained a controlling interest in the Orient Line, its partner in the England- Australia mail route. Further acquisitions followed and the fleet reached a peak of almost 500 ships in the mid-1920s. In 1920, the company also established a bank, P&O Bank, that it sold to Chartered Bank of India, Australia and China (now Standard Chartered Bank) in 1927. At this time it established a commercial relationship with Spinney's of Haifa, that developed into a major regional high-end grocery store chain, which eventually provided shipping services access to much of the Middle East. Until 1934 it operated liners from Key West, Florida to Havana; then it operated from Miami to Cuba until 1960.

Eighty-five of the company's ships were sunk in the First World War and 179 in the Second World War.

After 1945, the passenger market declined to India but boomed to Australia with the advent of paid-passages for literate & healthy European immigrants known as Ten Pound Poms. P&O built 15 large passenger liners, including SS Himalaya, SS Chusan, SS Arcadia (1954), and SS Iberia (1954), culminating in SS Canberra, its last & largest in 1961. By 1968 over 1 million immigrants had arrived—many via P&O—and Australia ended the program. P&O entered the cruise market and began to sell & scrap many of these liners. It concentrated mainly on cargo ships. It entered the tanker trade in 1959 and the roll-on roll-off (RORO) ferry business in the mid-1960s.

In 1969 British and Commonwealth Shipping, Furness Withy, P&O and The Ocean Steamship Company established Overseas Containers Limited ('OCL') to exploit containerisation.[2] By the early 1980s it had converted all of its dry cargo liner routes to container operations and in 1986 it bought out the remaining OCL partners, renaming the operation P&O Containers Limited (P&OCL). P&OCL was merged with Nedlloyd in 1996 to form P&O Nedlloyd. 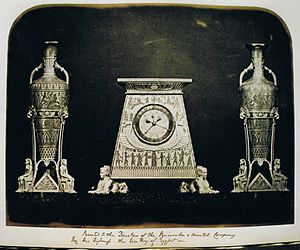 In 1972 P&O formally absorbed the British-India Steam Navigation Company (BI). The amalgamation of these two companies began in 1914 but BI had retained its own identity until this time. Strick Line and Hain-Nourse, amongst several other lines were also taken over in the early 1970s. B.I. cargo ships were renamed Strath*M* (Strathmore Strathmuir, Strathmay etc.) or Strath*C* (Strathcarron, Strathcarrol), the Strick line ships renamed Strath*A* (Strathanna, Strathaird, Strathattrick (the big "A") etc.) and the Hain-Nourse ships Strath*T* (Strathtruim, Strathtay etc.). The newest ships were 6 Strath*D*s (Strathdoon, Strathduns etc.) SD14s built in Sunderland. P&O also built 6 ships in Stocznia Gdansk, Poland (the Strath*E*s) and 2 ships in Japan (the Strath*F*s) and bought into DOT, a naval shipping company.

In 1975 P&O established Pandoro for operation of the company's Irish Sea RORO routes. Pandoro was an acronym for P and O Roro. In 1998 P&O European Ferries (Irish Sea) Ltd was formed by the internal merger of Pandoro Ltd. and P&O European (Felixstowe) Ltd., to run the Irish Sea routes.

In 1987 P&O took over the European Ferries Group Plc—to which it had previously sold its cross channel ferry services in 1985—which traded as Townsend Thoresen, and renamed the company P&O European Ferries.

Over the last quarter of the Twentieth Century P&O diversified into construction management (through the Bovis companies, which it owned from 1974 to 1999), property investment and development, and a variety of service businesses including exhibition and conference centres, but most of these activities were disposed of following the company's decision in March 1999 to concentrate on maritime and transport. Its P&O Ports and P&O Cold Logistics divisions developed from P&O's operations in Australia, where it has a leading position in these fields.

Fastcraft is the name given to the service implemented after the split-up of P&O European Ferries in 1998. The first ship was called Superstar Express (entered service in 1998)[3] and sailed alongside the Pride of Cherbourg and Pride of Hampshire to Cherbourg and back.

On 6 March 1987, the roll on/roll off ferry, MS Herald of Free Enterprise, capsized off the coast of Zeebrugge with 80 crew and 459 passengers aboard. 193 were killed in the capsizing. The operator of the ship, Townsend Thoresen, had been purchased by P&O in 1986.

The incident resulted in a coroner's inquest and a public inquiry. A jury at the coroner's inquest found a prima facie case that the company was guilty of manslaughter, and the Crown Prosecution Service charged the company and seven employees (see corporate manslaughter). The charges did not result in any convictions. As part of the public inquiry, Lord Justice Sheen wrote in a July 1987 report that Townsend Thoresen (the company) possessed a "disease of sloppiness" which permeated the company's hierarchy.[4][5]

The cases surrounding the incident set a precedent for the prosecution of corporations in cases of manslaughter and criminal negligence in English law.

On 23 October 2000 P&O divested its cruise business to form P&O Princess Cruises.[6] In April 2003 P&O Princess came together with the Carnival Corporation to form Carnival Corporation & plc. In June 2004, P&O sold its 25% stake in Royal P&O Nedlloyd, a major container shipping business into which its container operations had been merged in 1996.[7] The container company was later (June 2005) purchased by A.P. Moller-Maersk Group.

On Sunday 30 October 2005 The Sunday Times reported that P&O was in takeover talks with Thunder FZE, a wholly owned subsidiary of Dubai Ports World, a company owned by the government of Dubai in the United Arab Emirates. On 29 November, the P&O board announced that it would be recommending an offer of 443 pence per share, worth £3.3 billion (US$5.7 billion) to its shareholders.[8] In early December P&O regained its status as a FTSE 100 company when BPB plc was taken over. A bidding war commenced when Singapore's PSA International made a £3.5 billion offer, which Dubai Ports World then topped with a bid of £3.9bn (US$7bn).[9] Despite speculation that it would make a higher bid, PSA withdrew, and in February 2006 shareholders voted in favour of the offer from Dubai.[10] The combined group is the world's third largest ports operator. DP World proudly preserves P&O's history through the P&O Heritage Collection.

When the merger was approved by the US government in February 2006, the Bush Administration came under fire from critics who questioned the decision to allow an Arab-owned company to oversee US ports.

The move placed the leasehold interests of P&O in New York City, Newark, Baltimore, Miami, New Orleans, and Philadelphia under the control of Dubai Ports World. US operations represent ten percent of P&O's world-wide operations, and consist primarily of cranes and terminals. Many US politicians and media commentators assumed implicitly that the merger would affect port security at ports that P&O either managed or handled the loading and unloading of ships. David Osler, Industrial Shipping Editor of Lloyd's List said that US security procedures and overall port control would not be affected by the transaction.[11]

Several US states sought ways to block the move, citing security concerns as well as the possibility of losing related leases of foreign ports.[12] President Bush stated he would veto any legislation created with the intent to interfere with the change.[13]

On 9 March 2006, DP World agreed to sell its terminal operations at the American ports to an American company. On 11 December 2006 it was announced that AIG Global Investment Group, a division of insurance giant AIG, had acquired P&O Ports North America for an undisclosed sum.[14] Investing in infrastructure had become the latest "hot" item for financial firms, and P&O represented a high-profile asset. AIG GIG was an experienced infrastructure investor globally, having also recently acquired the London City Airport.[15]

On 16 December 2006 P&O Dover (Holdings) Limited, a subsidiary of P&O and DP World sold its shares on Shekou Container Terminals Phase 1 (22.5%) and Phase 2 (owned indirectly 22.5% shares), a port of Shenzhen, People's Republic of China, to a joint venture company of China Merchants Holdings (International) and Modern Terminals Limited (MTL), for which MTL bore the whole cost.[16] Shenzhen was ranked 4th in list of world's busiest container ports and Shekou Container Terminals was one of the four major terminals of Shenzhen.

P&O (aka DP World) manages two ports in the UK:

Other port operators in the UK include: