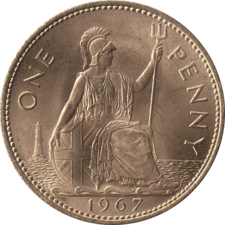 A pre-decimal penny from the United Kingdom, equivalent to ​1⁄240 of the pound sterling. 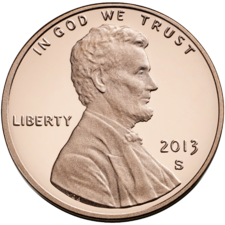 A penny is a coin (pl. pennies) or a unit of currency (pl. pence) used in several English-speaking countries. It is usually the smallest denomination within a currency system. In a number of countries, including the United States, the name penny has survived in popular use for a one cent coin in decimal systems. Due to their already low value and erosion of purchasing power due to decades of inflation, minting of pennies (or "one-cent coins") ceased in Canada in 2012.

Historically, the silver penny of the Anglo-Saxons and medieval England was the main coin in normal use, and reasonably valuable - they were often cut up into halves and quarters. The British penny remained a silver coin until 1797. The British farthing, worth a quarter of a penny, survived until 1956, and the halfpenny was minted until 1967. 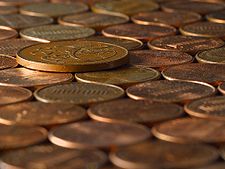 A variety of the low-value coins, including an (historical) Irish 2 pence piece and many United States pennies 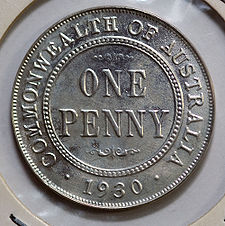 A silver copy of the rare and valuable 1930 Australian penny 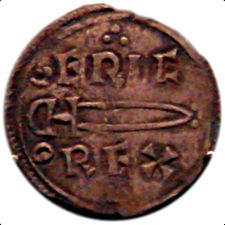 Old English versions of the word penny are penig, pening, penning and pending; the word appears in German as Pfennig, in Dutch and Swedish as penning (often shortened to peng) and in West Frisian as peinje or penje. In Icelandic, Swedish, Norwegian, Danish and Faroese, the most common words for "money" are "Peningar, pengar, penger, penge and peningur respectively. These words are thought by some to have a common root with the English word "pawn", German Pfand, and Dutch pand, words which mean "a pledge or token".[1] In the case of the Icelandic names for money, it is written in multiple ways depending on the context and inflection. For example: Pening, Peningur, Peningar, Peninga, Peninganir.

Origin and history of development

The silver penny of medieval Europe was modelled on similar small silver coins from antiquity: the Greek drachma and Roman denarius. There are also archeology exhibitions that show traces of pennies in Sweden and Norway. Researchers believe that this might be the result of Viking influence in northern Europe.[citation needed]

When Britain was under Roman rule, most of Britain used the Roman Empire's coin-based monetary system, but this changed soon after the Romans left. As the invading Anglo-Saxons began to settle and establish their own kingdoms, some started to make gold coins based on the old Roman designs, or designs copied from the coins used in the Frankish kingdoms. Their monetary system had a serious flaw: gold was so rare and valuable that even the smallest coins were very valuable, and thus could only be used in very large transactions, and were sometimes not available at all.

Between AD 641 and 670, there seems to have been a movement by the Anglo-Saxons to use debased coins with a lower gold content. This made the coins appear paler, decreased their value, and may have increased the number that could be made, but it did not solve the problem of value and scarcity of these coins.

Around the year 680 a new type of small silver coin appeared, which some have identified as sceattas or sceatt.[citation needed] Others suggest that the sceatta was a specific measurement of a precious metal.

Until the end of the 7th century, all Anglo-Saxon metal coins had been minted in gold. In Northumbria, silver pennies were minted in the name of Bishop Eadbert (consecrated between 772 and 782, died between 787 and 789), and some in the name of his brother Archbishop Egbert. This shilling is the oldest of English coins, preceding the penny.[2]

In France, Pepin the Short minted the novus denarius ("new penny") in about 735. This was a silver coin based on the denarius, and the penny was based[clarification needed] on the novus denarius.[3] Pepin declared that 240 pennies or pfennigs should be minted from one Carolingian pound,[4] about 326 g (10.5 troy ounces) of silver, so a single coin contained about 1.36 g (21 grains troy) of silver. (As of September 2013, this would cost about £0.60 or 1 US dollar.[citation needed])

Around 790, Charlemagne instituted a major monetary reform, introducing a new silver penny with a smaller diameter but greater weight. Surviving examples of this penny have an average weight of 1.70 grams, although some experts estimate the ideal theoretical[clarification needed] mass at 1.76 grams. The purity is variously given as 0.95 or 0.96.[5][6][7]

The penny was introduced into England by Offa, the king of Mercia from 757 until his death in July 796, using as a model a coin first struck by Pepin the Short. Offa minted a penny made of silver which weighed 22​1⁄2 grains or 240 pennies weighing one Saxon pound, equal to 5,400 grains. This was later known as the Tower pound, and led to the term pennyweight.

The coinage of Offa's lifetime falls essentially into two phases: the light pennies of medium flan comparable to those of Pepin and the first decades of Charlemagne in France; and the heavier pennies struck on larger flans that date from Offa's last years and correspond in size to Charlemagne's novus denarius introduced in 793/4. But the sceat fabric survived in East Anglia under Beonna and until the mid 9th century in Northumbria, while the new-style coinages were not struck not only by Offa, but also by the kings of East Anglia, Kent, and Wessex, by two archbishops of Canterbury, and even in the name of Offa's queen, Cynethryth.[8]

In 1257, Henry III minted a gold penny which had the value of twenty silver pence. The weight and value of the silver penny steadily declined from 1300 onwards.

The penny was almost the only coin issued in England until the introduction of the gold florin by Edward III in December 1343.[9]

Halfpence and farthings became a regular part of the coinage at that time. These coins were created by cutting pennies into halves or quarters for trade purposes, a practice said to have originated in the reign of Æthelred II.

The last coinage of silver pence for general circulation was in the reign of Charles II. Since then silver pence have only been coined for issue as royal alms on Maundy Thursdays.

First use of copper

Pennies were made of copper in the United States of America as early as 1793, the first pennies in America (Chain Cent).[10]

"The first copper coins that Matthew Boulton minted for the British Government have become known as 'cartwheels', because of their large size and raised rims. His Soho Mint (created at his Soho Manufactury in 1788, in Handsworth, West Midlands, England) struck 500 short tons (450 t) of these penny and two-penny pieces in 1797, and further issued copper coins for the Government in 1799, 1806, and 1807. All together the Mint produced over £600,000 worth of official English copper coinage, as well as separate copper coins for Ireland and the Isle of Man".

The penny that was brought to the Cape Colony (in what is now South Africa) was a large coin — 36 mm in diameter, 3.3 mm thick and 1 oz (28 g) — and the twopence was correspondingly larger at 41 mm in diameter, 5 mm thick and 2 oz (57 g). On them was Britannia with a trident in her hand. The English called this coin the Cartwheel penny due to its large size and raised rim,[11] but the Capetonians (what citizens of Cape Town, South Africa call themselves) referred to it as the Devil's Penny as they assumed that only the Devil used a trident.[12] The coins were very unpopular due to their large weight and size.[13]

On 6 June 1825, Lord Charles Somerset, the governor, issued a proclamation that only British Sterling would be legal tender in the Cape (South Africa colony). The new British coins (which were introduced in England in 1816), among them being the shilling, six-pence of silver, the penny, half-penny, and quarter-penny in copper, were introduced to the Cape. Later two-shilling, four-penny, and three-penny coins were added to the coinage. The size and denomination of the 1816 British coins, with the exception of the four-penny coins, were used in South Africa until 1960.[12]

In 1860 in Britain bronze pennies were introduced in place of copper ones, bronze being made of an alloy of metals, the main part is copper, alloyed with tin and a third metal that acts as a flux (anciently gold, silver, or lead, modernly nickel, silicon, manganese, aluminum, etc.[14]); these coins were an alloy containing 95 parts of copper, 4 of tin, and 1 of zinc. The weight was also reduced: 1 lb of bronze was coined into 48 pennies, versus 1 lb of copper which was coined into 24 pennies.[3][15][16] 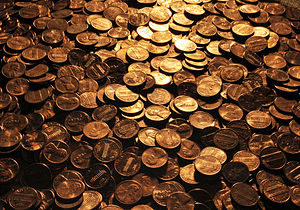 The penny is among the smallest denomination of coins in circulation.

In addition, variants of the word penny, with which they share a common root, are or were the names of certain units of currency in non-English-speaking countries:

In most of the English-speaking world, the plural of "penny" is "pence" when referring to a quantity of money and "pennies" when referring to a number of coins.[18] Thus a coin worth five times as much as one penny is worth five pence, but "five pennies" means five coins, each of which is a penny. In the US and Canada (when Canada still had them), "five pennies" also refers to five physical coins, but the value is "five cents".

Irish pound decimal coinage only used "p" to designate units (possibly as this sufficed for both the English word "pence", and Irish form "pingin").

Handling and counting penny coins makes transaction costs that may be higher than a penny. It has been claimed that for micropayments the mental arithmetic costs more than the penny. Australia and New Zealand adopted 5¢ and 10¢, respectively, as their lowest denomination,[19] followed by Canada which adopted 5¢ as their lowest denomination in 2012.[20]

Changes in the price of metal commodity, combined with the continual debasement of paper currencies, causes the metal value of pennies to exceed their face value.[21][22] Several nations have stopped minting equivalent value coins, and efforts have been made to end the routine use of pennies in several countries, including the United States.[23] In the UK, since 1992, one- and two-penny coins have been made from copper-plated steel (making them magnetic) instead of bronze.

To "spend a penny" in British idiom means to urinate. The etymology of the phrase is literal; some public toilets used to be coin-operated, with a pre-decimal penny being the charge levied. The first recorded charge of a penny for use of a toilet was at The Great Exhibition of 1851. Eventually, around the same time as the introduction of decimal coinage, British Rail gradually introduced better public toilets with the name Superloo and the much higher charge of 6d (2​1⁄2p).[24]

Finding a penny is sometimes considered lucky and gives rise to the saying, "Find a penny, pick it up, and all the day you'll have good luck." This may be a corruption[citation needed] of "See a pin and pick it up, all the day you'll have good luck" and similar verses, as quoted in The Frank C. Brown collection of North Carolina folklore and other places.[25]

The first known record of the phrase "a penny for your thoughts" is found in a 1547 collection of contemporary English language phrases compiled by John Heywood called A dialogue conteinying the nomber in effect of all the proverbes in the Englishe tongue.[26] A possibly related idiomatic expression, "my two cents", may use the low-value denomination to figuratively devalue the speaker's opinions for the sake of irony or humility.