The Pennsylvania Department of Transportation (PennDOT) oversees transportation issues in the Commonwealth of Pennsylvania. The administrator of PennDOT is the Pennsylvania Secretary of Transportation, currently Leslie Richards. Presently, PennDOT supports over 40,500 miles (65,200 km) of state roads and highways, about 25,000 bridges, as well as new roadway construction, the exception being the Pennsylvania Turnpike Commission, although they currently follow PennDOT policies and procedures.[citation needed] In addition, other modes of transportation are supervised or supported by PennDOT. These include aviation, rail traffic, mass transit, intrastate highway shipping traffic, motor vehicle safety & licensing, and driver licensing. PennDOT also supports the Ports of Philadelphia, Pittsburgh, and Erie. The current budget is approximately $3.8 billion in federal and state funds. The state budget is supported by the motor vehicle fuels tax which is dedicated solely to transportation issues.

PennDOT has extensive traffic cameras set up throughout various parts of major cities in the state, such as Philadelphia, Harrisburg, Allentown (Lehigh Valley), and Luzerne County. The latter's cameras are actually fed through to a television channel for Service Electric cable customers in Wilkes-Barre. These cameras are primarily installed for ITS purposes, not for law enforcement (as opposed to speed cameras).

The Pennsylvania Department of Transportation was created from the former Department of Highways by Act 120, approved by the legislature on May 6, 1970.[citation needed] The intent of the legislation was to consolidate transportation-related functions formerly performed in the Departments of Commerce, Revenue, Community Affairs, Forests and Waters, Military Affairs and other state agencies.

Greatest growth in the state highway system occurred in 1931 when 20,156 miles (32,438 km) of rural roads were taken over by the Commonwealth. At that time, the Department of Highways, at the direction of Governor Gifford Pinchot, embarked upon an extensive program of paving rural roadways, well known as the "get the farmer out of the mud" program.[citation needed]

The Federal Government in 1916 instituted grants to the states for highway construction. These grants continue today and now comprise the key element in determining the size of the state's roadbuilding programs.

State payments to local communities for road maintenance also have continued to expand so that they average approximately $170 million annually.

The agency went into well-noted organizational decline. An effort to bring quality management principles to PENNDOT over an extended period--four changes of state governor--accomplished a great deal.[1] 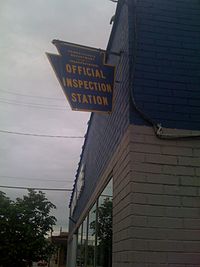 PennDOT-issued sign at an auto garage stating that it conducts vehicle inspections for cars registered in Pennsylvania.

PennDOT is responsible for motor vehicle titles and registration along with issuing driver licenses. Through a system of decentralized, privatized providers, driver services are available at over 1700 sites statewide.[citation needed] The privatized system of providers sometimes referred to as auto tag agents or even private DMV offices has existed for over 45 years. This revolution of private DMV Offices has been followed by only 5 more states. However, Pennsylvania is the only state to separate motor vehicle offices from driver license offices. Driver license centers to this day are all run and owned by PennDOT, unlike motor vehicle offices which are strictly run and controlled by PennDOT however privately owned. An exception to this is at the PennDOT headquarters on Front St. in Harrisburg, which has a large room for all motor vehicle transactions and drivers' license transactions, with a separate room for photographing and issuing licenses to motorists.

There are over 1700 card agents and full agents, in which approximately 400 online messengers, each of these with incrementally increasing authority as dictated by law and all controlled by PennDOT. Online messengers exist throughout Pennsylvania with the same authorities as DMV offices in other states.

According to a 2011 study by Transportation for America, 26.5% of Pennsylvania's bridges were structurally deficient and the state led the United States with six metropolitan areas with a high percentage of deficient bridges.[2] These figures would have been higher, but the state had recently undertaken a program to quadruple state funding for bridge repairs.[2]

Pennsylvania has the highest number of structurally deficient bridges in the U.S.[3] Overall, the state has 25,000 bridges excluding privately-owned bridges, which is the third largest number of bridges in the U.S.[5] Pennsylvania has launched a program called the Rapid Bridge Replacement project to increase the number of bridges it fixes. The project is a public-private partnership between PennDOT and the private firm Plenary Walsh Keystone Partners. The project fixed almost 700 bridges in 2014.[3]

Administratively PennDOT is divided into engineering districts to localize engineering and maintenance. The following is a table of the districts and their associated headquarters. The statewide headquarters for PennDOT is located in the Keystone Building in Harrisburg.

PennDOT, like most government bureaucracies, has gotten its share of criticisms over the years. The biggest controversy has been the quality of the roads in the Commonwealth, as Pennsylvania in the past has had among the worst roads in the United States.[6] (However, according to a July 14, 2015 article in the Business Insider, PA roads didn't even make the top ten (10) worst roads in the nation. [7] ) Among the reasons:

However, there are supporting arguments as to the roadway conditions being terrible in Pennsylvania that are not entirely the fault of PennDOT, including:[citation needed]

Other controversies PennDOT has faced have been nothing out of the ordinary, such as misuse of public funds as spending money for employees.

Unlike other states, PennDOT does not support nor work closely with its corresponding transit agencies (SEPTA, Port Authority of Allegheny County). In addition, there is no dedicated transit funding source usually sponsored by the state DOT.