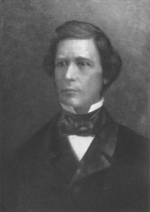 The party was founded on November 27, 1854, in Towanda (Bradford County) by former Congressman David Wilmot. Wilmot invited a small group of friends and political leaders to the organization's first meeting, which took place in his home. Among the attendees were Senator Simon Cameron, Congressman Thaddeus Stevens, Colonel Alexander McClure and future Governor Andrew Curtin. Wilmot convinced the group to form local Republican Clubs in their home counties. George Bloom made the Republican Party a statewide organization in 1959. He had the headquarters based in Harrisburg, where it remains to this day.[2]

Pennsylvania was dominated politically by the Democratic Party until around 1856. This is at least partially attributed to the desire of many in the state to promote its growing industries by raising taxes. From the period immediately preceding the Civil until the mid-1930s, political dominance in the state largely rested with the Republican Party. The party was led by a series of bosses, including Simon Cameron, J. Donald Cameron, Matthew Quay, and Boies Penrose.[3] Quay in particular was one of the dominant political figures of his era, as he served as chairman of the Republican National Committee and helped place Theodore Roosevelt on the 1900 Republican ticket.[4] During the period from the Civil War until the start of the Great Depression, Republican gubernatorial administrations outnumbered Democratic administrations by a margin of sixteen to two. Republican dominance was ended by the growing influence of labor and urbanization, and the implementation of the New Deal.[5] However, even after the New Deal, Republicans continued to control the governorship until George M. Leader's election in 1954,[3] and Republicans remain competitive in the state. 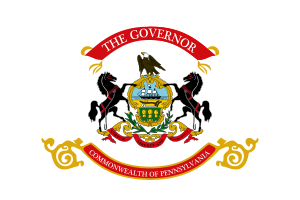 Flag of the Governor of Pennsylvania

Republicans Bill Scranton and Ray Shafer followed Lawrence. In 1968, state law was changed to allow governors to run for a second four-year term. However, in the 1970 election (the first which allowed the winner the opportunity to run for a second term), Democrat Milton Shapp defeated Shafer's Lieutenant Governor, Ray Broderick. Shapp was re-elected over GOP nominee Drew Lewis in 1974.[7]

Since Shapp's election, no governor has lost his bid for re-election, and partisan control of the governorship has alternated between Democratic and Republican.[7]

After Democrat Jimmy Carter's victory in 1976 (in which he carried the state), Pennsylvania was carried by the Republican presidential nominee in three consecutive elections. In 1980, Ronald Reagan won 49.6% of the popular vote and Carter received 42.5%. In 1984 Reagan acquired 53% of the votes. In 1988 George Bush won with 50.7% of the popular vote against Michael Dukakis who obtained 48.4%. In 1992, Pennsylvania was carried by Democrat Bill Clinton, who received 45.1% of the popular vote and Republican Bush got 36.1%. In 1996 Clinton again carried the state with 49.2% of the vote against Bob Dole's 40%. Al Gore carried the state with 50.6% of the vote in 2000 and Bush only received 46.4%. Democrat John Kerry became the fourth straight Democratic presidential nominee to carry the state in 2004 receiving 51% and Bush obtained 48.3% of the votes.[7]

Republicans held both US Senate seats from 1968 to 1991. In 1991, after the death of Senator John Heinz, a special election was held. In the election, former Kennedy administration official and Democrat Harris Wofford defeated former governor Dick Thornburgh, who resigned as President Bush's Attorney General to run in the election. The Republican defeat was considered to be a major upset. Wofford went on to be defeated in his bid for a full six-year term in 1994 by Congressman Rick Santorum. Republicans would hold both of Pennsylvania's Senate seats until Santorum was defeated in his bid for a third term in 2006.[5]

In 1998, 42% of Pennsylvania's registered voters were Republican, 48% were Democrats, and the other 9% were either unaffiliated or with other parties.[8]

Democrats also retook the majority in the State House this year, though the balance-of-power in the State Senate remained the same.[7]

There were three major statewide judicial contests in 2009. In the election for Justice of the State Supreme Court, Republican Joan Orie Melvin garnered about 900,000 votes (53.2%), defeating Democrat Jack Panella, who garnered about 800,000 votes (46.8%).[9]

The other two elections were for the state's two intermediate appellate courts. In the election for four judges to the State Superior Court, there were nine candidates. Of the winners, three were Republicans and one Democrat. Additionally, in the election for two judges to the Commonwealth Court, Republicans Patricia McCullough and Kevin Broboson came-out on top of a four-candidate field.[9]

Incumbent Republican Governor Tom Corbett ran for re-election to a second term but was defeated by Democrat Tom Wolf. This marked the first time an incumbent Governor running for re-election in Pennsylvania lost.[10]

Most members are elected every four years in the Republican primary election by county. Each county party chairman is a state committee member by virtue of office.

The breakdown of members per county, along with caucus of county is as follows:[2]

Proposed change to the electoral college

Republicans in Pennsylvania are currently discussing a change to the way in which the state's votes in the Electoral College are allocated. Some want to eliminate the current "winner take all" system in which all electoral votes go to the candidate who wins the most popular votes, and replace it with one in which electoral votes are apportioned to each candidate based on the popular vote within each congressional district. This system would give 18 of the state's 20 electoral votes (which it is slated to have following the 2010 Census, and would affect the 2012 and 2016 presidential elections) to the winner of each congressional district, while the other two votes would go to the winner of the state's aggregate popular vote. If this change had affected the 2008 presidential election, Barack Obama would have received 11 of the state's 21 electoral votes (which it had at time based on the 2000 Census), even though he won the state by a 10-point margin.[11]

There are also some State Senators, of both parties, who want to change the electoral college vote apportionment process to a proportional one based on the popular vote. Supporters assert that such a system would allow each voter and region of the state to decide which candidate is best, and electoral college votes would be apportioned accordingly.[12]