The highway begins at a busy intersection in Pittsburgh's Highland Park neighborhood. For the next 2.7 miles, it follows a portion of the Green Belt, running along a peaceful parkway in the urban environment of Pittsburgh and Penn Hills. It then serves as a major two lane road through the suburbs of Penn Hills, Churchill, and Wilkins Township. It then connects with the old industrial suburbs of Turtle Creek, Wilmerding, Pitcairn, and Trafford. The road continues through suburban Penn Township, before passing through the industrial town of Jeannette, and entering Greensburg, one of several edge county seats which serve as Pittsburgh edge cities.

After journeying through heavily suburbanized Hempfield Township, the road enters a very rural area at the foothills of the Appalachian Mountains.

PA 130 begins at an intersection with PA 8 (which is a part of the Blue Belt of the Allegheny County belt system) in the Highland Park neighborhood of Pittsburgh, Allegheny County, heading east on two-lane undivided Allegheny River Boulevard, which is a part of the Green Belt. The road passes under two Allegheny Valley Railroad lines as it heads through woodland with another Allegheny Valley Railroad line and the Allegheny River to the north of the road. The route crosses into Penn Hills Township and continues alongside the railroad and the river, turning southeast onto Sandy Creek Road away from the Allegheny River. PA 130 heads through wooded areas of commercial development and turning south. The route comes to an intersection with Verona Road in Sandy Creek, at which point the Green Belt turns west. The road becomes Coal Hollow Road and passes through woodland near residential subdivisions, curving southeast before heading south onto Old Coal Hollow Road and reaching an intersection with PA 380 in a commercial area. PA 130 becomes Beulah Road and runs through suburban residential neighborhoods, turning southwest as it crosses into Churchill. The route heads through wooded areas with some nearby homes, curving southeast and south before reaching an interchange with I-376/US 22, at which point it is a four-lane divided highway. Past this, the road becomes a four-lane undivided road and continues past homes, narrowing back to two lanes. PA 130 enters Wilkins Township and heads through commercial areas with some homes, becoming Brown Avenue and heading south. The road continues through wooded areas with some development, heading into Turtle Creek and passing homes.[1][2]

The route curves southeast and passes under a Union Railroad line, turning east onto four-lane divided Osborne Street. PA 130 becomes Tri Boro Expressway and continues through commercial areas, with the Yellow Belt joining the road at the Thompson Street intersection. The road heads southeast between woods to the northeast and residential areas to the southwest, with the road elevated over the developed areas. The route becomes the border between Turtle Creek to the northeast and Wilmerding to the southwest before fully entering Wilmerding. PA 130 curves east and comes to an interchange with Patton Street, at which point the Yellow Belt splits from the route by heading south. The road crosses into Monroeville and runs north of Turtle Creek and Norfolk Southern's Pittsburgh Line as it turns northeast onto two-lane undivided Broadway Boulevard into woodland with some commercial development. The route heads into Pitcairn and passes downtown businesses, turning southeast. The route heads through woodland as it crosses back into Monroeville. PA 130 intersects PA 48, which also carries the Orange Belt. Past this intersection, the road continues south through more wooded areas of homes and businesses. The route turns east and crosses into Trafford, becoming 5th Street.[1][2]

File:Harrison City Pennsylvania 2010.jpg PA 130 comes to a bridge over the Turtle Creek into Westmoreland County, heading east through more of Trafford on the bridge, passing near industrial areas and heading over a Turtle Creek Industrial Railroad line. After the bridge, the route intersects the western terminus of PA 993 and runs through the commercial downtown, turning northeast onto Forest Avenue and heads into residential areas. PA 130 turns east onto 7th Street and passes more homes. The road turns northeast and becomes the border between Trafford to the northwest and North Huntingdon Township to the southeast, fully entering Trafford again and becomes Seventh Street Extension as it heads through more residential areas with some woods, curving east. The route crosses into Penn Township and becomes Harrison City Road, running through more areas of suburban housing developments. PA 130 continues southeast into more wooded areas of homes with a few businesses as an unnamed road, heading past more commercial establishments and crossing over I-76 (Pennsylvania Turnpike). The road continues into dense areas of housing developments, becoming Harrison City-Jeannette Road. The route comes to another intersection with PA 993 in Harrison City, at which point that route turns southeast for a concurrency with PA 130, passing more businesses along with a few homes. After a turn to the south, PA 993 splits from PA 130 by turning east onto Bushy Run Road, and PA 130 continues southeast on Harrison Avenue, heading through more residential areas with a few businesses. The road heads through wooded areas with some farm fields and homes before crossing into Jeannette and winding east through residential areas with some woods. The route turns southeast and passes near industry before continuing past several homes with some businesses. PA 130 turns east and briefly heads through Penn Township before crossing the Brush Creek into Hempfield Township. The road becomes unnamed and heads through wooded areas with some nearby homes as a four-lane divided highway. The route comes to an interchange with the PA 66 toll road and continues through more woodland with some homes and fields, becoming College Avenue.[1][3] 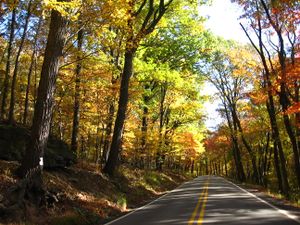 Autum colors near Stahlstown on PA 130

At the end of the one-way pair, both directions of PA 130 head east on two-lane undivided East Pittsburgh Street, crossing under a Southwest Pennsylvania Railroad line and the Five Star Trail, passing homes and businesses. The route heads into commercial areas and turns southeast onto Humphrey Road, with East Pittsburgh Street continuing east to provide access to and from the eastbound direction of US 30. PA 130 heads through residential areas in Hempfield Township with some commercial establishments, coming to an interchange with access to and from the westbound direction of the US 30 freeway. The road passes through more residential neighborhoods in Stonevilla before turning south into more wooded areas with a few homes as an unnamed road. The route winds southeast through more woodland with some nearby housing developments, crossing into Unity Township as it passes to the southwest of Unity Reservoir. PA 130 becomes Pleasant Unity Road and heads into a mix of farmland and woodland with some homes, becoming unnamed again. The route turns southwest onto Myers Road before turning south onto another unnamed road. PA 130 turns east and curves south through more rural areas with some housing developments, curving southeast and making a turn to the northeast at Humphreys. The road curves east-southeast and heads into the residential community of Pleasant Unity, coming to an intersection with PA 981. Here, PA 981 turns east to form a concurrency with PA 130, with the road heading southeast through more of the community. PA 981 splits to the northeast and PA 130 continues southeast into open agricultural areas with some woods and homes.[1][3]

The road becomes the border between Unity Township to the northeast and Mount Pleasant Township to the southwest as it forms a short concurrency with PA 982 in Lycippus. The route heads through more farmland as an unnamed road and heads into forested areas, crossing Chestnut Ridge. PA 130 turns south to fully enter Mount Pleasant Township before curving southeast into Donegal Township. The road becomes the border between Cook Township to the northeast and Donegal Township to the southwest and heads through more forests with some farm fields and homes. The route comes to an intersection with PA 711 in Stahlstown and continues through more forested areas. PA 130 turns east fully into Cook Township and runs a short distance to the north of I-70/I-76 (Pennsylvania Turnpike) before reaching its eastern terminus at an intersection with PA 381.[1][3]