Pennsylvania Route 28 (PA 28) is a major state highway which runs for 98 miles (158 km) from Anderson Street in Pittsburgh to U.S. Route 219 in Brockway in the U.S. state of Pennsylvania. From Pittsburgh to Kittanning it is a 44.5 mile long limited access expressway named the Alexander H. Lindsay Memorial Highway or the Allegheny Valley Expressway.

Route 28 begins adjacent to Downtown Pittsburgh at the I-279/I-579 interchange and travels north/northwest along the northern bank of the Allegheny River. Until recently the route was a surface street for the first two miles until the 40th Street Bridge and then an expressway from 40th Street to Kittanning. Upgrades in 2013 made it a limited-access highway throughout its 44.5 miles in the Pittsburgh metropolitan area from the route's start at Interstate 279 to Rayburn Township, Armstrong County, with Governor Tom Corbett attending the completion ceremony on November 17, 2014.

Upon crossing the Allegheny River and entering Kittanning, US 422 and PA 28 interchange with Pennsylvania Route 66. PA 66 then joins the concurrency for two miles (3 km) to an exit with U.S. Route 422 Business southeast of downtown Kittanning. Here, US 422 leaves the freeway and heads east toward Indiana while PA 28 and PA 66 remain concurrent as they progress northward.

After crossing the Redbank Creek, PA 28/PA 66 enters Clarion County and New Bethlehem. In downtown New Bethlehem, PA 66 splits off from PA 28 and making the PA 28/PA 66 concurrency one of the longest concurrencies in Pennsylvania. After the split, PA 28 heads northeast as Broad Street paralleling the Redbank Creek. In Hawthorn, PA 28 is called Brookville Street and meets the western terminus of Pennsylvania Route 536. North of PA 536, PA 28 begins to slide to the north instead of the northeast.

In Summerville, PA 28's course begins to slide towards the northeast again and in Summerville, PA 28 is called Harrison Street. In Clover and Rose townships, PA 28 parallels many railroads tracks that even cross it. In Brookville, PA 28 has a Wrong-way concurrency with U.S. Route 322 and Pennsylvania Route 36. The reason of the Wrong-way concurrency is that PA 28 is heading north while PA 36 is heading south on the concurrency with US 322. In downtown Brookville, PA 36 splits off from US 322/PA 28. Then after crossing the North Fork Creek, US 322/PA 28 meet the southern terminus of the former Pennsylvania Route 968. East of here, US 322 splits off from PA 28 at a "T" interchange. East of Brookville in Pine Creek Township, PA 28 intersects Interstate 80 at exit 81 a Diamond interchange. North of I-80, PA 28 continues north as a local road without intersecting another route for more than 14 miles (23 km). PA 28 passes through the many wildlife in Pennsylvania through a forest region. In Brockway, PA 28 is called Main Street before terminating (ending) at a "T" intersection with U.S. Route 219.

The highway was signed in 1927 from Pittsburgh to Kittanning.

The highway was extended north to Brockway in 1928. In 1928, the route was under construction from Blawnox to Cheswick, Troy Hill Road to Oakland, and Hazen to Reitz Crossing Road. Those sections were completed the following year. In 1929, the section from Avella to Woodrow and from Hickory to Fort Cherry Road was under construction and finished the following year. In 1930, the section from Skyline Road to PA 18 was paved as well as in Venice. That year the western terminus was moved from Avella to Independence. In 1958, the highway was widened and a median installed at the interchange with the Turnpike. On July 15, 1960, the highways southern terminus was moved from Independence to PA 8 in Etna. The former section of PA 28 from South Main St. in the West End Valley to the intersection of Noblestown Rd. and Crafton Blvd. in Crafton Heights was redesignated as PA 60. The remaining 83-mile stretch from Crafton Heights to Independence was renumbered PA 50. This designation change was made to reduce the number of concurrent routes in Pittsburgh. The changes took effect a few months later and signs were changed by spring 1961.[4] 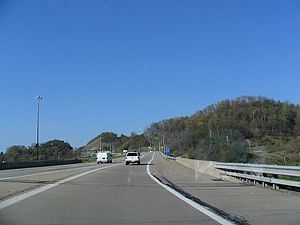 In 1963, this section opened to traffic from PA 8 north to the Highland Park Bridge interchange and the following year to Blawnox. Also that year, the Pittsburgh Area Transportation Plan recommended upgrading PA 28 and then PA 8, to a six-lane, limited-access highway starting 2,200 feet (670 m) west of the 31st Street Bridge and ending at the 40th Street Bridge. Full interchanges would be constructed at both bridges; however, this recommendation was not carried out. It also laid out a plan that would turn PA 28 into an expressway from Pittsburgh to Brookville, this too was not carried out.

In 1973, the route was extended to end at US 19/PA 65 at Chateau Street via Western Avenue and East Ohio Street.

In 1980, the expressway opened from Exit 12 to Exit 13 and the PA 28 designation was moved onto this section. In 1984, the route was changed to follow Western Avenue, Allegheny Avenue, North Shore Drive, General Robinson Street, and Madison Avenue for northbound traffic, and Reedsdale Street for southbound traffic in Pittsburgh. The final section of the Allegheny Valley Expressway between Exit 13 and Exit 15 opened in 1985.

In 2011, the southbound lanes of PA 28 were shifted to bypass the intersection of the 40th Street Bridge, while the northbound lanes remained under the bridge. In 2012, an excavation lowered the roadbed of PA 28 at the 31st Street Bridge.[5]

Though technically limited access for its first two miles near downtown Pittsburgh since the 2012 construction, all lanes were clear of lane closures and construction by November, 2014 when Governor Tom Corbett attended the official groundbreaking ceremony of to celebrate all 44.5 miles being expressway-grade. The widening included a small park with a promenade and a retaining wall which features several murals on the city's history, including that of the Saint Nicholas Croatian Catholic Church on the aforementioned structure's site.[6]

Pennsylvania Route 28 Truck is a 3-mile-long (4.8 km) truck route in Brookville, Jefferson County, Pennsylvania. As Route 28 travels through the Brookville city center, it becomes a narrow main street and features a relatively sharp turn just west of the bridge over North Fork Creek. As a result, after the completion of Interstate 80, Route 28's truck traffic was shifted onto this freeway bypass from Exit 78 at Pennsylvania Route 36 (which Truck 28 is cosigned for its first 1/2 mile of existence) to Exit 81, where Route 28 meets the highway.