From Infogalactic: the planetary knowledge core
Jump to: navigation, search
This article is about the current Pennsylvania Route 65. For the former route, see U.S. Route 62 in Pennsylvania.

Pennsylvania Route 65 (PA 65, also known as the 65th Infantry Division Memorial Highway), is a major 51-mile-long (82 km)[2] state highway located in western Pennsylvania, United States. The route, traveling north–south from the Interstate 279/U.S. Route 19 Truck (I-279/US 19 Truck) concurrency in Pittsburgh north to the PA 108/PA 168 concurrency in New Castle, connects downtown Pittsburgh to the northwestern portion of the Pittsburgh Metropolitan Area. PA 65 is similar in its purpose to PA  18 and PA 51, both of which run parallel to PA 65 at one point or another; however, the three routes pass through different cities for most of their respective alignments.

The route begins in the Golden Triangle of Pittsburgh as a limited-access highway, following the bank of the Allegheny and Ohio rivers around the Manchester neighborhood, passing north of Heinz Field and west of PNC Park. While limited-access, the road becomes Ohio River Boulevard, named for the river that PA 65 parallels for 25 miles (40 km) between the city of Pittsburgh and the borough of Rochester. Outside of the city, the road becomes a four-lane at-grade roadway to Rochester, with some portions featuring a divided highway. North of Rochester, PA 65 narrows to two lanes and passes through predominantly rural land, running concurrent with PA 18 and PA 288 as it heads north.

In Pittsburgh, the boulevard was one of the deadliest roads in the city from the 1970s to the early 1980s.[3]

PA 65 originates at a triangular-shaped interchange at the I-279/US 19 Truck concurrency near downtown Pittsburgh. Long ramps stretch from exit 7A on I-279 north of the Fort Duquesne Bridge. PA 65 starts as a limited-access highway known as the "Ohio River Boulevard". This was the site of many deadly accidents during the 1970s.[3] The following exit is called "North Shore" and is located only on PA 65 northbound. This exit is the primary entrance to Heinz Field (home to the Steelers) and it is also a way for drivers to get to PNC Park (home to the Pirates).

On the following exit, PA 65 makes a loop to the north and begins a concurrency with US 19 at a diamond interchange just north of the West End Bridge. The following two exits (one northbound and another southbound) ends the concurrency between US 19 and PA 65. Beyond US 19, PA 65 returns to at-grade level as a divided highway through the western sections of Pittsburgh. At mile marker 2.9 near the Pittsburgh city line, PA 65 intersects the Blue Belt which crosses the Ohio River to the southwest on the McKees Rocks Bridge. 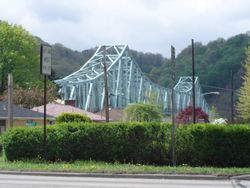 The Sewickley Bridge seen from PA 65 in Sewickley.

Outside of Pittsburgh, PA 65 continues as the Ohio River Boulevard on its northwest course and passes through the following boroughs paralleling the Ohio River: Bellevue, Avalon, Ben Avon, and Emsworth. In Emsworth, PA 65 intersects the first terminus of the Green Belt at an intersection with Camp Horne Road. Upon exiting Emsworth, PA 65 returns to a divided highway and interchanges with I-79 and the Yellow Belt at exit 66 in the borough of Glenfield.

West of I-79, PA 65 continues to parallel the Ohio River located to the south. Along the way, PA 65 passes through some boroughs like Haysville and Osborne. In the borough of Sewickley, PA 65 meets the long Orange Belt at Broad Street which crosses the Ohio River on the Sewickley Bridge and has direct access to PA 51. Leaving Sewickley, PA 65 crosses two more broughs (Edgeworth and Leetsdale) before exiting Allegheny County. In Leetsdale, PA 65 meets the first terminus of the Red Belt at an intersection involving Cross Street. 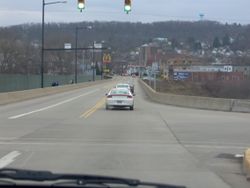 Leaving Allegheny County and entering Beaver County, PA 65 traverses the borough of Ambridge. In Ambridge, PA 65 intersects the southern terminus of PA 989. When exiting Ambridge, PA 65 travels to the north paralleling the Ohio River as a divided road as it passes through Baden. In East Rochester, PA 65 follows a concurrency with PA 51, while in Rochester, PA 51/PA 65 intersects PA 18. At mile marker 25.1 in downtown Rochester, a major four-route interchange takes place where PA 51 joins PA 68 and PA 65 continues to the north. In Rochester Township, PA 65 begins a concurrency with PA 18 as it enters the northbound lanes of PA 65 and exits on the southbound lanes.

PA 18/PA 65 continue northward paralleling the Beaver River. In New Brighton, the PA 18/PA 65 concurrency ends when PA 65 makes a 90-degree-angle turn towards the northeast as 5th Street. After a couple of wide turns, PA 65 becomes Mercer Avenue later becoming Mercer Road outside of New Brighton. In North Sewickley Township, PA 65 intersects PA 588 then passes over I-76 (Pennsylvania Turnpike). East of Ellwood City, PA 65 begins another concurrency with PA 288 into Ellwood City. On the south side of Ellwood City, PA 65/PA 288 curve to the north as 2nd Street.

The designation was applied to the current US 62 alignment between Oil City and Ohio from 1928 to 1932. PA 65 was under construction from Mercer to Valley Road in 1928 and completed the following year. On July 15, 1960, PA 65 was designated in its current location replacing the previous PA 88 designation. This designation change was made to reduce the number of concurrent routes in Pittsburgh. The changes took effect a few months later and signs were changed by spring 1961.[1] In 1965, a median was installed between Freedom and Rochester.

In January 1970, construction began on the next section of Ohio River Boulevard from near the California Avenue/Marshall Avenue intersection to Pennsylvania Avenue. In 1973, a $16 million section opened to traffic with plans to continue the expressway to the Fort Duquesne Bridge.

In spring 1987, construction on the $8 million Phase One project to connect the two sections of Ohio River Boulevard together began from Western Avenue to Allegheny Avenue. In January 1988, Phase Two of the project began, which consisted of a new interchange between the expressway and the West End Bridge. The bridge would be closed for two years while it underwent rehabilitation and new ramps were built at the northern end for the interchange. The southern terminus was moved from Western Avenue to I-279 when the missing section in Ohio River Boulevard was finally completed in 1992.[2]

While the two are nowhere near each other now, PA 65 and PA 88 were once the same route. In 1961, the routes were split, with the northern portion (New Castle–Pittsburgh) gaining the PA 65 badging while the southern portion (Pittsburgh–Point Marion) retained the PA 88 badging.[1] This was done because the New Castle–Pittsburgh portion was dedicated to the 65th Infantry Division, and the number was changed in honor of that unit.

Although it has been nearly half a century since the redesignation was done, remnants of PA 65 being once part of PA 88 still show in the area. Four of PA 88's five spur routes (PA 288, PA 388, PA 488, and PA 588) are now spur routes of PA 65, but still retain the "88" base numbers. In addition, a drive-in theater known as Spotlight 88 in North Sewickley Township retained its name after the route was redesignated, and is still known by that name as its current incarnation as a flea market after the drive-in was destroyed by an F3 tornado on May 31, 1985, as part of the 1985 United States-Canadian tornado outbreak.[2][6]

Planning for Ohio River Boulevard started in the 1920s. In 1928, construction began on the boulevard that would run from Manchester to the Borough of Emsworth. The highway would be 40 feet (12 m) wide and have many bridges over local roads. It would end at a traffic circle on the North Shore of the Ohio River at the McKees Rocks Bridge. The route that was built to relieve traffic and accidents on California Avenue was dedicated in August 1931 at a final cost of $12 million.

As traffic on boulevard began to increase in the 1950s and 1960s, many plans were introduced to improve the highway. Ideas ranged from widening the highway to building a new expressway to current day I-79. During the 1960s, a southern extension of the boulevard to Pittsburgh's North Side was discussed and by 1973 the highway opened from the Fort Duquesne Bridge to Ridge Avenue and the McKees Rocks Bridge to Beaver Avenue and Chateau Street. Many of these proposals would fall to the wayside because of lack of funding and interest or community protest. The missing gap which includes a connection to the West End Bridge did not open until January 1992.

All exits are unnumbered.

Pennsylvania Route 65 Truck (PA 65 Truck) is a truck route of PA 65 that bypasses a weight-restricted bridge over Spruce Run Creek in Ben Avon, on which trucks over 32 tons and combination loads over 40 tons are prohibited. The route was signed in September 2013 and follows the McKees Rocks Bridge over the Ohio River, PA 51, Neville Road, Grand Avenue, and I-79.[9][10]

Pennsylvania Route 65 Truck (PA 65 Truck) is a truck route of PA 65 that bypasses a weight-restricted bridge over an abandoned railroad in Shenango Township, on which trucks over 36 tons and combination loads over 40 tons are prohibited. It was signed in September 2013 and follows US 422 and US 422 Business.[9][11]