The President of the Senate is the Lieutenant Governor, who has no vote except in the event of an otherwise tie vote. Following the 2014 Elections, the Senate consisted of 30 Republicans and 20 Democrats.

The Senate is made up of 50 members who are elected by district. As of 2016, the partisan breakdown is 31 Republicans and 19 Democrats. In 2012, a State Senate district had an average population of 254,047 residents. 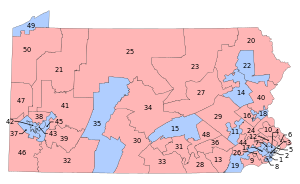 Members of the Pennsylvania State Senate