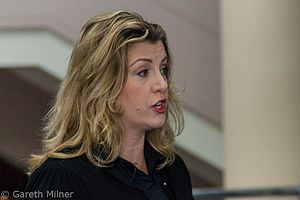 Penelope Mary "Penny" Mordaunt[2] (born 4 March 1973) is a British Conservative Party politician who has been the Member of Parliament (MP) for Portsmouth North since winning the seat at the 2010 United Kingdom general election. She is currently the only female military veteran in the House of Commons. Mordaunt was appointed as a Parliamentary Under-Secretary of State at the Department for Communities and Local Government in July 2014.[3][4] On 11 May 2015 the Prime Minister appointed her Minister of State for the Armed Forces at the MoD, the first woman to take this post.[5]

The daughter of a paratrooper,[6] one of twins born in Torquay, Mordaunt was named after the Leander-class frigate HMS Penelope.[6] Her father, who was born in Hilsea barracks, left the Parachute Regiment before the family moved to Portsmouth in 1975, when Mordaunt was aged two, so that he could retrain as a teacher.[6] He taught at Oak Park school and later became a youth worker for Hampshire Council. Her mother was a special needs teacher at several Purbrook schools, and her stepmother is also a local primary school teacher. Mordaunt has two brothers: James, and a younger brother, Edward.[7] She is a descendant of Philip Snowden, the first Labour Chancellor of the Exchequer.[8]

When Mordaunt was 15, her mother died of breast cancer.[6] Mordaunt's twin brother left school, whilst she became carer to Edward. The following year her father was diagnosed with cancer, and survived.[6] To pay her way through sixth-form college, Mordaunt became a magician's assistant to Portsmouth magician Will Ayling, once president of The Magic Circle.[6]

She has attributed her interest in politics to her experiences working in hospitals and orphanages of post-revolutionary Romania in her gap year, after the 1989 revolution.[10] She read philosophy at the University of Reading, becoming the first member of her family to attend university.[7]

After leaving university, Mordaunt began a successful career in business and communications, working in the private, public and charitable sectors. She was communications director for Kensington and Chelsea Council, supported British truckers during the French blockades whilst working for the Freight Transport Association[7] and was a director at the Community Fund which merged administratively with the New Opportunities Fund to create the Big Lottery Fund. In 2006 Mordaunt became Director of Diabetes UK[11] - the largest patient organisation in Europe.

Mordaunt has also worked with several high-profile politicians. Under Prime Minister John Major she was Head of Youth for the Conservative Party, whilst she had a two-year spell as Head of Broadcasting under party leader William Hague.[7] In 2000, she was Head of Foreign Press for George W. Bush's presidential campaign,[12][13] and she worked for the Bush campaign again in 2004.[14] After the 2005 election she worked as a chief of staff for David Willets' leadership campaign.[15]

In November 2003, Mordaunt was selected as Conservative candidate to contest Portsmouth North in the 2005 general election. She managed to attain a 5.5% swing towards the Conservatives[7] but lost to Labour candidate Sarah McCarthy-Fry by 1,139 votes.[16] A critic of women-only shortlists,[17][18] Mordaunt was re-selected in January 2006 to contest Portsmouth North for the 2010 general election.[7] She proposed standing for Mayor of London as a commuter mayor.[19]

In the 2010 general election, Mordaunt won the seat with an 8.6% swing from Labour, giving her a 7,289 majority. After her election, she was a member of the Public Bill Committee for the Defence Reform Act 2014.[20] She is a supporter of homeopathy, having signed an early day motion in support of its continued funding on the National Health Service.[21]

In 2014, Mordaunt became only the second woman in Elizabeth II's reign (the first being Lady Tweedsmuir in 1957) to propose the loyal address in reply to the Queen's speech from the throne, and made reference to Tweedsmuir's comments about wanting more female involvement in Parliament.[22]

When receiving The Spectator magazine's Parliamentarian of the Year award in late November 2014, Mordaunt revealed that she had delivered a speech in the House of Commons just before the Easter recess in 2013 on poultry welfare so as to use the word "cock", as a forfeit for a misdemeanour during Naval Reserve training.[23][24] Mordaunt used the word “cock” six times and “lay” or “laid” five times. Following her admission, she was accused by Labour MP Kate Hoey of trivialising parliament.[25]

Mordaunt is a Royal Naval Reservist, serving as an Acting Sub-Lieutenant,[26] at HMS King Alfred on Whale Island, a Fellow of the Royal Society for Arts, a member of the British Astronomical Association, and she is involved in many charities active in the Portsmouth area, including Southsea Greenhouse, Hilsea Lido, The Patey Centre, and Wymering Manor, about which she said: "We wouldn't have embarked on the project if we weren't confident it would be sustainable and could provide a community facility which will be used for many many years. Lots of people really see its potential - it could be a wonderful space."[27] Mordaunt is a patron of Victoria Cross Trust, as well as an ambassador for Portsmouth Scouts.

In 2014, Mordaunt appeared on reality television programme Splash!.[28] Whilst some criticised the media appearance, Mordaunt insists that the response was overwhelmingly positive and defended her appearance,[29] by openly stating that she was donating all of her £10,000 appearance fee plus any additional sponsorship to charity: £7,000 towards the renovation of her local lido; the rest to four Armed Services charities.[6]

Mordaunt lives with her partner Ian Lyon, a classical singer and director of an IT company, who was elected to Portsmouth City Council for Nelson Ward.[7] The couple breed Burmese cats, and have four cats themselves.[30]