From Infogalactic: the planetary knowledge core
Jump to: navigation, search
For other uses, see Pentacle (disambiguation). 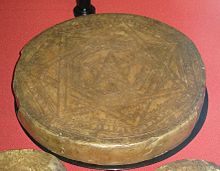 A pentacle (also spelled pantacle in Thelema, following Aleister Crowley)[1] is an amulet used in magical evocation, generally made of parchment, paper or metal (although it can be of other materials), on which the symbol of a spirit or energy being evoked is drawn. It is often worn around the neck, or placed within the triangle of evocation. Protective symbols may also be included (sometimes on the reverse), a common one being the five-point form of the Seal of Solomon, called a pentacle of Solomon or pentangle of Solomon.[2] Many varieties of pentacle can be found in the grimoires of Solomonic magic; they are also used in some neopagan magical traditions, such as Wicca, alongside other magical tools.

The words pentacle and pentagram (a five-point unicursal star) are essentially synonymous, according to the Online Oxford English Dictionary (2007 revision), which traces the etymology through both French and Italian back to Latin, but notes that in Middle French the word "pentacle" was used to refer to any talisman. In an extended use, many magical authors treat them as distinct. In many tarot decks and in some forms of modern witchcraft, pentacles often prominently incorporate a pentagram in their design.

There is a specific differentiation between pentacle and pentagram within Wicca and other neopagan traditions. Namely, a pentacle refers to a pentagram circumscribed by a circle. This form of pentacle is formed upon a disk which may be used either upon an altar or as a sacred space of its own. The pentacle is representative of the Earth in occult usage.[3]

The word is first recorded in English usage in 1561, from earlier French use, in turn from post-classical Latin pentaculum (from penta- "fivefold" + -culum diminutive suffix). The French word had a meaning of "talisman", typically in the shape of a pentagram, but the word could also refer to talismans in the shape of a hexagram.[4]

The Oxford English Dictionary in earlier editions (2nd edition 1989) went on to say that "some would connect it" with the Middle French word pentacol (1328) or pendacol (1418), a jewel or ornament worn around the neck (from pend- hang, à to, col or cou neck).[2][5] This is the derivation the Theosophical Society employ in their glossary:

...it seems most likely that it comes through Italian and French from the root pend- "to hang," and so is equivalent to a pendant or charm hung about the neck. From the fact that one form of pentacle was the pentagram or star-pentagon, the word itself has been connected with the Greek pente (five).[6]

Pentacles, despite the sound of the word, often had no connotation of "five" in the old magical texts, but were, rather, magical talismans inscribed with any symbol or character. When they incorporated star-shaped figures, these were more often hexagrams than pentagrams.[citation needed] Pentacles showing a great variety of shapes and images appear in the old magical grimoires, such as the Key of Solomon; as Heinrich Cornelius Agrippa summarises it, their use was to "fore-know all future things, & command whole nature, have power over devils, and Angels, and do miracles." Agrippa attributes Moses' feats of magic in part to his knowledge of various pentacles.[7]

A Fourth Book of Occult Philosophy (c. 1565) spuriously attributed to Agrippa gives detailed instructions as to how pentacles should be formulated:

But we now come to speak of the holy and sacred Pentacles and Sigils. Now these pentacles, are as it were certain holy signes preserving us from evil chances and events, and helping and assisting us to binde, exterminate, and drive away evil spirits, and alluring the good spirits, and reconciling them unto us. And these pentacles do consist either of Characters of the good spirits of the superiour order, or of sacred pictures of holy letters or revelations, with apt and fit versicles, which are composed either of Geometrical figures and holy names of God, according to the course and maner of many of them; or they are compounded of all of them, or very many of them mixt.[8]

Francis Barrett, in his influential work The Magus of 1801 (Book 2, part 2), repeats these instructions almost verbatim.

Another common design employed in pentacles is a magic square, such as the Sator-Arepo-Tenet square.[9]

In the Golden Dawn magical system, the Earth Pentacle is one of four elemental "weapons" or tools of an Adept. These weapons are "symbolical representations of the forces employed for the manifestation of the inner self, the elements required for the incarnation of the divine."[10]

Other pentacles for the evocation of spirits are also employed in the Golden Dawn system; these are engraved with the name and sigil of the spirit to be invoked, inside three concentric circles, having painted on their reverse a circle and cross like a celtic cross.[11]

According to Aleister Crowley's instructions for the A∴A∴, the pentacle is a disc of wax, gold, silver-gilt or Electrum Magicum, eight inches diameter and half an inch thick; the Neophyte should "by his understanding and ingenium devise a symbol to represent the Universe", and engrave this on the disc.[12]

There is, therefore, nothing movable or immovable under the whole firmament of heaven which is not included in this pantacle, though it be but 'eight inches in diameter, and in thickness half an inch.' Fire is not matter at all; water is a combination of elements; air almost entirely a mixture of elements; earth contains all both in admixture and in combination. So must it be with this Pantacle, the symbol of earth.[13]

A pentacle is also employed as a magical tool within Wicca and other modern forms of witchcraft, generally to summon certain energies or summon spirits.[14]

In many old grimoires dealing with magical evocation, the pentacle is described as being hung about the neck, providing protection and authority to the operator. Johannes Trithemius has the magician donning the pentacle just before casting the protective circle:

Then taking your ring and pentacle, put the ring on the little finger of your right hand; hang the pentacle round thy neck; (Note, the pentacle may be either wrote on clean virgin parchment, or engraven on a square plate of silver and suspended from thy neck to the breast)....[15]

One version of the Key of Solomon mentions both a "Great Pentacle" which is drawn in a book, as well as a collection of other pentacles which are drawn in ink on separate pieces of parchment for use as amulets:

Thou shalt preserve them to suspend from thy neck, whichever thou wilt, on the day and hour wherein thou wast born, after which thou shalt take heed to name every day ten times, the Name which is hung from thy neck, turning towards the East, and thou mayest be assured that no enchantment or any other danger shall have power to harm thee.[16]

The pentacle is of central importance in the evocation of spirits. A fairly typical evocation involves a series of conjurations of increasing potency, each involving the display of the pentacle:

... If they then immediately appear, it is well; if not, let the master uncover the consecrated pentacles which he should have made to constrain and command the spirits, and which he should wear fastened round his neck, holding the medals (or pentacles) in his left hand, and the consecrated knife in his right; and encouraging his companions, he shall say with a loud voice:

Here be the symbols of secret things, the standards, the ensigns, and the banners, of God the conqueror; and the arms of the almighty One, to compel the aerial potencies. I command ye absolutely by their power and virtue that ye come near unto us, into our presence, from whatsoever part of the world ye may be in, and that ye delay not to obey us in all things wherein we shall command ye by the virtue of God the mighty One. Come ye promptly, and delay not to appear, and answer us with humility.

If they appear at this time, show them the pentacles, and receive them with kindness, gentleness, and courtesy; reason and speak with them, question them, and ask from them all things which thou hast proposed to demand.
But if, on the contrary, they do not yet make their appearance, holding the consecrated knife in the right hand, and the pentacles being uncovered by the removal of their consecrated covering, strike and beat the air with the knife as if wishing to commence a combat, comfort and exhort thy companions, and then in a loud and stern voice repeat the following conjuration: ...[17]

Once the spirit has appeared and been constrained, the pentacle is covered again, but is uncovered whenever demands are made of the spirit or when it is compelled to depart.

In the Golden Dawn system, the pentacles are not suspended from the neck, but wrapped in a cloth covering; instead of a "pentacle", the magician wears fastened to their breast a "Lamen", which serves among other things as a magical shield.[citation needed]

File:Pents04.jpg
The traditional suit of coins was revisioned as "pentacles" in the 1909 Rider-Waite tarot deck, designed by Golden Dawn initiates A. E. Waite and Pamela Colman Smith.

In the tarot, the Minor Arcana are divided into four suits (much like conventional playing cards): swords, staves/wands, cups and coins. Following the innovation of Eliphas Levi, many English language writers on Tarot divination now call the coins "pentacles", and many decks depict them as discs marked with a pentagram. In this context they represent the element earth or divinity manifesting in matter.[citation needed]

The term pentacle is used in Tilings and Patterns by Grumbaum and Shepard to indicate a five-pointed star composed of ten line segments, similar to a pentagram but containing no interior lines.[19]