From Infogalactic: the planetary knowledge core
Jump to: navigation, search
Not to be confused with Bank of China, Central Bank of the Republic of China (Taiwan), or National Bank of China.
"PBOC" redirects here. For other uses, see PBOC (disambiguation).

The bank was established on December 1, 1948, based on the consolidation of the Huabei Bank, the Beihai Bank and the Xibei Farmer Bank. The headquarters was first located in Shijiazhuang, Hebei, and then moved to Beijing in 1949. Between 1950 and 1978 the PBC was the only bank in the People's Republic of China and was responsible for both central banking and commercial banking operations. All other banks within Mainland China such as the Bank of China were either organized as divisions of the PBC[4] or were non-deposit taking agencies.[5]

In the 1980s, as part of economic reform, the commercial banking functions of the PBC were split off into four independent but state-owned banks and in 1983, the State Council promulgated that the PBC would function as the central bank of China. Mr. Chen Yuan was instrumental in modernizing the bank in the early 1990s. Its central bank status was legally confirmed on March 18, 1995 by the 3rd Plenum of the 8th National People's Congress. In 1998, the PBC underwent a major restructuring. All provincial and local branches were abolished, and the PBC opened nine regional branches, whose boundaries did not correspond to local administrative boundaries. In 2003, the Standing Committee of the Tenth National People's Congress approved an amendment law for strengthening the role of PBC in the making and implementation of monetary policy for safeguarding the overall financial stability and provision of financial services. 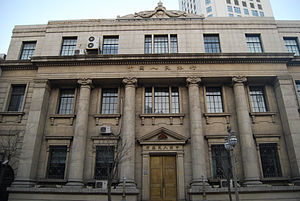 The PBC has established 9 regional branches, one each in Tianjin, Shenyang, Shanghai, Nanjing, Jinan, Wuhan, Guangzhou, Chengdu and Xi'an, 2 operations offices in Beijing and Chongqing, 303 municipal sub-branches and 1809 county-level sub-branches.

The PBC consists of 18 functional departments (bureaus) as below:[7]

The following enterprises and institutions are directly under the PBC:[8]

The PBOC is active in promoting financial inclusion policy and a member of the Alliance for Financial Inclusion.[9]

Previously, interest rates set by the bank were always divisible by nine, instead of by 25 as in the rest of the world.[10][11] However, this is no longer applied since the central bank started changing rates by 0.25 percentage points on October 19, 2010 (which was a rate increase).